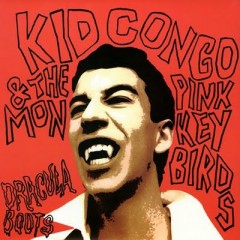 The Gun Club
The Cramps
Nick Cave and the Bad Seeds

What do these legendary bands of the underground have in common? At one time or another Kid Congo Powers has been their guitar player! Never staying still for long, Kid Congo Powers has loaned his trademark guitar skills to all three of the bands through some of their best sounding periods. He co-founded The Gun Club but didn’t join them on a recording until the mid-80’s. Mainly because he was too busy helping Lux Interior and The Cramps corner the market on fried-brain, psychedelic, surf punk on their second and best album. Congo also collaborated with Nick Cave and The Bad Seeds on a few choice recordings in the early 90’s. Through all of this, there was no mistaking Kid Congo’s distinctive style.

This mad chicano’s instantly recognizable open-tuned, twang guitar sound will be front an center when Kid Congo and the Pink Monkey Birds hit the back room at Comet on Friday night. The new band’s sound is very much in the vein of The Gun Club and The Cramps, with the damaged fuzz of 60’s sleaze rock gone punk. I’ve been hearing great things about this underground rock veteran’s recent shows; like his personality behind the microphone is as larger-than-life as his legendary guitar playing. This one’s going to be a helluva good time!