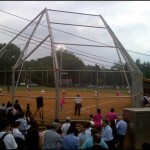 Both teams were stacked with a who’s who list of Washington pols and reporters, including Captains Dana Bash of CNN and Shailagh Murray of the WaPo, and Captains Sen. Lisa Murkowski, Rep. Jo Ann Emerson, Sen. Kirsten Gillibrand and Rep. Debbie Wasserman Schultz, a principal organizer of the event, who was diagnosed with breast cancer two years at the age of 41. MSNBC’s Andrea Mitchell and Sen. Amy Klobuchar announced the game and kept the friendly banter going.Very entertaining.