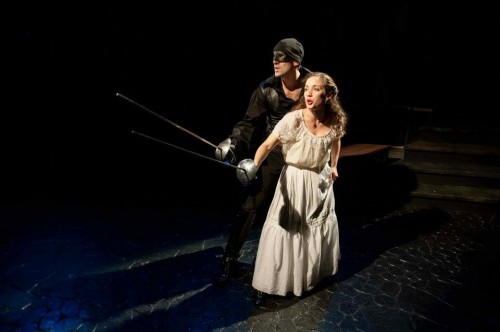 In Constellation Theatre’s new retelling of Zorro co-playwright and director Eleanor Holdridge cuts straight to the action. Unlike other hero tales which place emphasis on backstory and the journey towards a fully realized superhero, Holdridge spends minimal time before we see the iconic black mask of Zorro. Instead the 100 minute, single act production is packed with lots of swashbuckling that played out very well in the confined spaces of The Source Theatre. Fight director Casey Kaleba’s choreography is worthy of praise for it is one of the highlights of show. When swords aren’t drawn, barbs are exchanged through Holdridge & Janey Allard’s script. Audiences will see a familiar hero in Zorro (Danny Gavigan). When the mask is on Gavigan is charming, witty, and leaves his mark with three fell swoops of his sword.

However it is when our protagonist does not have his mask on that we see Holdridge and Allard’s new vision in this classic tale.