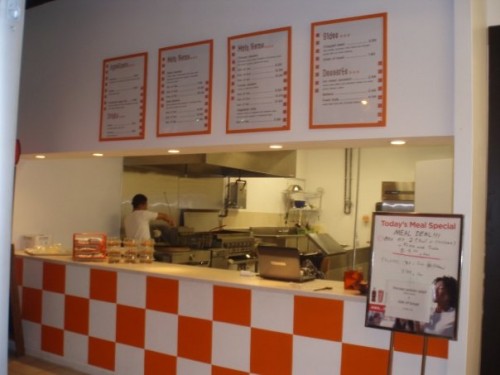 DC does so many different kinds of food well that it’s hard to decide where to go for dinner. Ethopian? Sure, we’ve got lots of that. Peruvian Chicken? Crisp ‘n Juicy? Super Pollo? El Pollo Rico? All are options, but when you’ve got choices like this, you’re always going to run into the person who loves restaurant A, but not B, and vice versa. When my friends started telling me about Meat in a Box, I figured there would be one Kabob Bazaar person in the group, but no, it was universal, it was almost cultish the devotion that my group of friends have for this little kabob eatery over in Falls Church.

Hy friend Hugh was dogged in his persistence that I try out Meat in a Box, and finally I gave in and met him there for lunch on Monday. It’s a small spot, maybe six tables inside (and another four outside for when the weather is hospitable) and a spartan bright interior.

There aren’t a lot of options at Meat in a Box: Beef, Chicken or Falafel on flatbread. Their flatbread isn’t too thin like so many places, nor is it too thick that you wonder if there’s anything in it but the bread. Wanting to give fair treatment, I tried the mixed platter, grabbing a pair of the flatbread creations. The chicken was delicately spiced, paired excellently with their yogurt sauce, making for a fine lunchtime repast. Their beef kebab is almost lamb-esque, with a complex flavor that could be, I believe, chemically addicting. They’re quick to put salad with their sandwiches, instead of insisting on heavy fries, making this a pretty solid takeaway option, as well. There’s nothing worse than soggy fries in your to-go box! Better yet, they also deliver to the Falls Church area, so get your phone order ready, and you can have a great office lunch

But, where this family-run establishment really shined brightest was its ice cream sandwich. Yes, Monday was cold and miserable, but Hugh was adamant that I try their house specialty. Between two thin wafers was a golden ice cream center, but that’s not french vanilla in there, it’s a homemade rose-water ice cream that is as delicate as any I’ve ever tasted. This is the sort of homestyle treat you just can’t get anywhere, no it takes family to make this kind of ice cream sandwich. This is the kind of dessert that takes you to a magically-imbued happy place with unicorns and kittens and rainbows. Okay, so maybe not quite like that, but let’s just say, I had to close my eyes and take a moment. I understand now the fanatical devotion to Meat in a Box, and I suspect I’ll be a lot easier sell when my friends place a call, with a little edge of desperation in their voices, that says “MEAT IN A BOX!”