According to available Census data, not really.  About 12.8% of the District’s population was born in a foreign country, compared to 12.5% nationally– so no big difference there.  And only 14.6% of District residents speak a language other than English at home, which is significantly smaller than the 19.6% of US residents that do so.  So in these two measures, the District certainly doesn’t stand out as having more international residents than the US.

But, we know that comparing DC to states or countries isn’t usually a good comparison because of the unique characteristics of a city.  So let’s compare the District with peer cities, like Baltimore, Boston, San Francisco, and Portland. 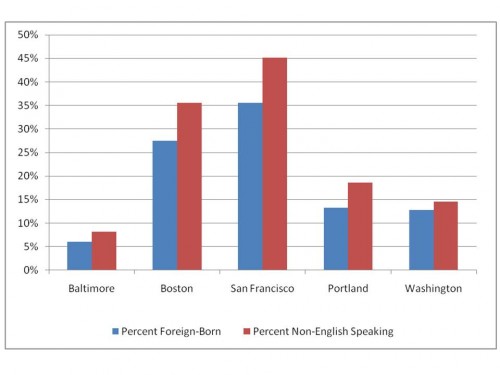 Cities with International Characteristics (According to 2006-2008 Census Estimates)

DC is definitely on the low end of peer cities, according to 2006-2008 Census estimates.  Of course cities like Boston and San Francisco, which are typically more associated with immigrants, have higher proportions of foreign-born residents and non-English speakers.  But even Portland, which is not considered a global city, has higher percentages of foreign residents than the District.  So using Census data to answer this question shows us that DC residents aren’t any more international than the next city.

But as we know, DC draws its community from across the whole region.  And since some of the best ethnic food is out in the suburbs, let’s include them.  Here’s what we get when we look at the DC region compared with other regions: 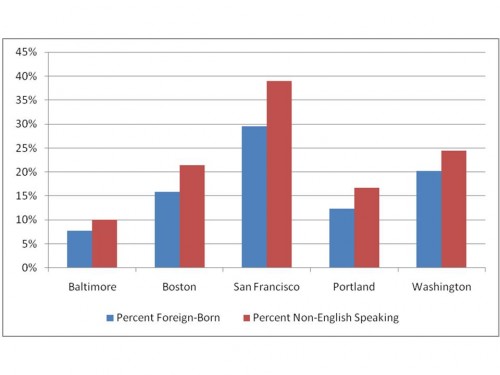 Regions with International Characteristics (According to 2006-2008 Census Estimates)

Here’s where the international character of DC starts to come out.  When you look at the region, the DC area does have a higher proportion of foreign residents than the national average.  It’s still dwarfed by San Francisco, but it’s home to more foreign residents and speakers than Boston.  So I guess all the people that I hear speaking foreign languages just commute in from the ‘burbs?

DC definitely has an international character, with all the embassies and international organizations here.  But when you look at who is living in the city, it doesn’t have the high proportion of foreign residents that you’d expect.  And even when you factor in the suburbs, DC still only comes in a bit higher than the national average (though above many peer cities).  So what’s the verdict?

DC is an international city, because of the federal government and embassies and organizations based here.  But DC residents aren’t more foreign-born or foreign-speaking than normal.  Our region has a higher percentage of foriegn-born and foreign-speaking residents than many other peer cities, but it’s still not near the level of San Francisco, for example.  So while the city is international, those who live here aren’t overwhelmingly international.  Myth both busted and confirmed.

And, while I’ve got your attention!  Census information is important to statistics nerds like me, but it also determines how much money DC gets for various programs.  So I’m putting in a plug for DC Counts— please fill out and return your 2010 Census form.  Whether you’re a citizen or not (and if you’re here illegally you should still fill it out because your immigration status will not be shared with law enforcement), it’s your responsibility to fill out the form.  We need an accurate count of who is actually living in the District, so please fill out your 2010 Census.