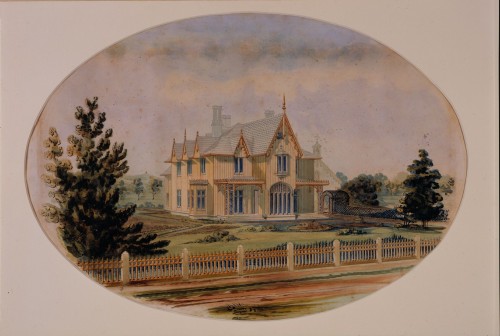 “A major component of the American pursuit of happiness has long been a home of one’s own (the automobile is a distant second: the one a castle, the other a chariot).”   – James F. O’Gorman, lead curator for Drawing Toward Home.

When talking about art we often highlight forms such as painting, theater, sculpture, dance, and photography – just to name a few.  However, often overlooked are the artistic endeavors of both the historic and modern architectural community.  The newest exhibition at the National Building Museum, called Drawing Toward Home, highlights the intricate and often-complex domestic architectural drawing.

As a traveling exhibition organized by Historic New England in celebration of their Centennial, the 100-plus drawings featured provide a unique look into the vast history of the New England Style home.  Ranging from the Federal to the International Style and spanning over 200 years, Drawing Toward Home “reminds us that the architecture of New England is a touchstone of American Architecture”.  The exhibition is uncomplicated; simple to follow and clearly displayed.  Organized chronologically into four sections, beginning circa 1800 and ending around 1980, Drawing Toward Home is much like the foundation of the architectural drawing itself – a cohesive way to convey pure information. 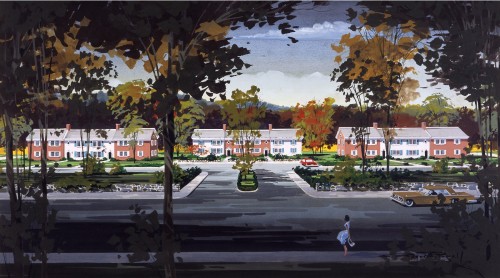 The first section, ‘The Rise of the Architectural Profession’ (c. 1800 – c. 1860), focuses on how a small community of untrained draftsman transformed into a growing profession of skilled and knowledgeable men; moving away from bare-boned diagrams “based on Roman classical precedent as it was then understood” to colorful renderings.  One of the first drawings in the exhibit was composed by Samuel McIntire, who is regarded as one of the earliest architects in the United States.  The McIntire drawing demonstrates what was, and still is, the ultimate purpose of the architectural drawing, to communicate necessary information to the builder for construction – but also indirectly represents how far the industry has come.  Another drawing that was quite fascinating was that of Asher Benjamin, who not only represents this earlier period of Federal Style and Greek Revival, but also revolutionized the industry through his pattern books.  Furthermore, the Italianate Style and Gothic interpretation of the late 1840’s, represented by a Joseph Hayward drawing, also demonstrates how the style of architecture was continuously evolving during this time.

‘The Art of Architecture’ (c. 1860 – c.1900), the second section, focuses on how the architectural community changed as a result of increased education.  With the introduction of the first architecture school in the United States (the Massachusetts Institute of Technology in 1867), large firms and architectural periodicals became the norm; finally the architect began to be classified as an artist.  Early drawings from prominent firms such as McKim, Mead, & White and Peabody & Sterns are dispersed throughout this section, representing how quickly the profession had grown. Furthermore, with the onset of more money, cheaper paper, and an abundance of talented apprentices– the technique of presenting clients with large, elaborate rendered perspectives was now expected. 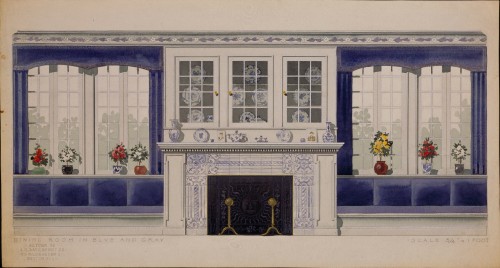 The third section, ‘The Period House’ (c. 1900 – c. 1940), reveals that of an evolving profession – with an increased attention to period detail and the introduction of client involvement during the design-build process.  My favorite drawing of this section was the John M. Allen Cape Cod House, which demonstrates the iconic style that most commonly comes to mind when referencing New England architecture.  Moreover, the renderings and perspectives during this era take on a whole new life – representing a newly recognized relationship between house and garden, the preference for a sketchier, free-handed technique, and the use of new mediums for expression (such as chalk).  As exhibit curator for the National Building Museum, Chrysanthe Broikos, best explains it, “with a new level of skill came a new level of freedom in the types of drawings created”.

‘Tradition and Innovation’ (c. 1940 – c. 1980), the final section of the exhibit, includes examples of both International Style Modernism (with the introduction of the Gropius school of thought) and that of the English Colonial Revival.  Drawings begin to take on an even more unique style, as New England architects begin to find their individual niche within the industry.  Additionally, ways of presentation continue to evolve – referenced through a drawing in the exhibit that includes an interior-furnishing plan.  My favorite drawing of this section has to be Walter Crabtree’s Proposal for Apartment Complex, which includes both a rendered car and woman for both scale and added touch of realism.

Although there are no drawings in the exhibition that represent the current expectations within the industry, which now almost entirely focus on presentations utilizing computer aided drafting and 3-d rendering.  What I like most about the exhibit is that it reminds those of us in the profession of where we came from, and introduces those of us that are not in the profession to an integral, yet antiquated, art form.

Drawing Toward Home: Designs for Domestic Architecture from Historic New England will be on exhibit through August 15, 2010 at the National Building Museum.

3 thoughts on “We Love Arts: Drawing Toward Home”