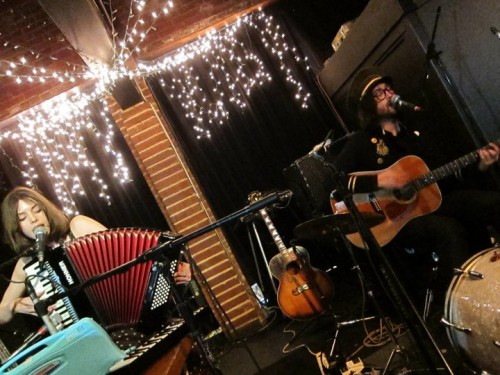 All photos by Santiago Gamboa.

Guest reviewer Alexia Kauffman attended the show at Iota on Tuesday. Here are some of her thoughts about it.*

The blustery wind and threatening snow didn’t discourage the crowd from assembling at Arlington’s Iota Club & Cafe on Tuesday night for the unusual pairing of NYC’s The Ghost Of A Saber Tooth Tiger and solo experimental vocalist Julianna Barwick. The GOASTT is Sean Lennon’s latest musical project, a collaboration with his model girlfriend Charlotte Kemp Muhl. They are on their first US tour in support of their debut album, “Acoustic Sessions”. Fresh from appearing on the Jimmy Fallon show in New York last week, the GOASTT seemed at home on Iota’s small, Christmas-light-adorned stage. 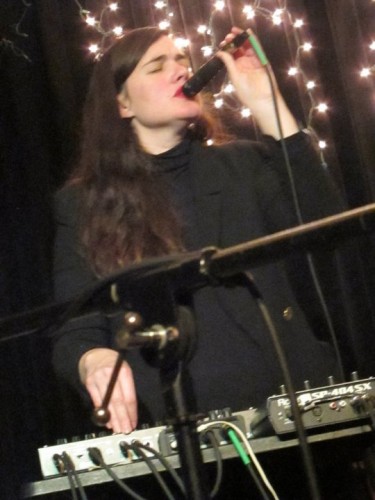 To start off the evening Julianna Barwick, dressed in black, ascended the stage alone. With the help of her loop station she began layering soft, enchanting vocals, one upon the next. The sound created its own space, ringing and echoing, turning Iota into a mini cathedral. Her first song built slowly into a plodding siren song, calling the listener to the edge of darkness.

At times there was the muted thump of electronic bass drum, keeping a driving beat for the surreal atmosphere created by Barwick’s layer upon layer of vocal swirling. Strung throughout her set was a drifting feeling of being seaside. At one point her highest reaching notes even took on the voices of seagulls. It is impossible to avoid comparing the atmosphere she creates with her vocals to Sigur Ros, but also there were clear moments that evoked the raw feelings found on Bjork’s all-vocal oeuvre “Medulla”. The sole distraction in her set was the gabbing of audience members clearly not on the same wavelength. 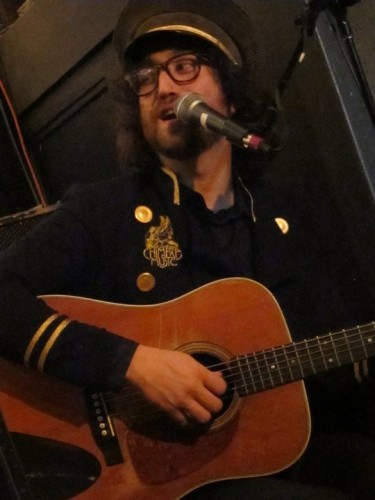 The second half of the night was distinctly lighter. When Sean Lennon, Charlotte Kemp Muhl and C.J. Camerieri took the stage as The Ghost of a Saber Tooth Tiger cheers and wolf-whistles rang out. Unlike Lennon’s previous tours in support of his solo albums, for which he was backed by a full band, this time there were only the three of them. Each member multi-tasked on a motley array of instruments. Lennon shared with the audience that this was because he liked to stretch out and lie down in the van, and the more people, the less leg-room for him. He played guitar, kick-drum, tambourine on a stand with a pedal, and occasionally the cymbal with his fingernails. Camerieri (who Lennon kept referring jokingly to as “Mr. Calamari”) rotated between muted & un-muted trumpet, French horn, and various percussion devices, including a wooden frog. Miss Kemp Muhl held her own on a cool acoustic/electric bass, melodica, glockenspiel, accordion, and even managed a few notes on a plastic recorder.

Their sound ranged from psychedelic-laced folky pop to Spanish-sounding guitar escapades, to 60s French-pop a la Francoise Hardy or Serge Gainsbourg. The group’s strength lay in their gentle weaving of meandering melodies with soft, pretty harmonies. Lyrics like “curios, ballerina bones, and tight rope vertigo” which sound like they could be heard at the Mad Hatter’s tea party floated on top of lilting guitar. 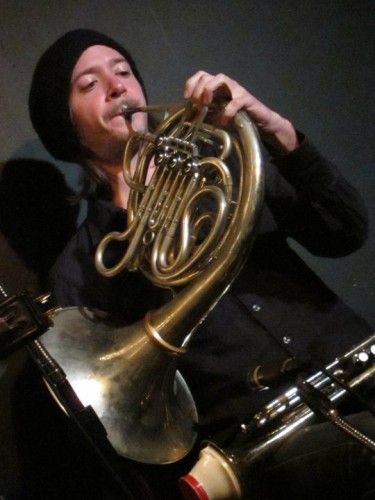 Lennon clearly felt comfortable, or faked it well, in the intimate setting that Iota provided. Between songs he would talk to the audience and make cheesy jokes. The shining moments for this listener were instrumental:Lennon’s guitar prowess shining through, or the subtle and beautiful contributions of the multi-horn playing Camerieri. Such a highlight came in the song ‘Lavender Road’, where Lennon’s guitar shined through in a Spanish-inspired solo, eventually being joined by Camerieri on trumpet in a riffed-out spectacle of an ending. 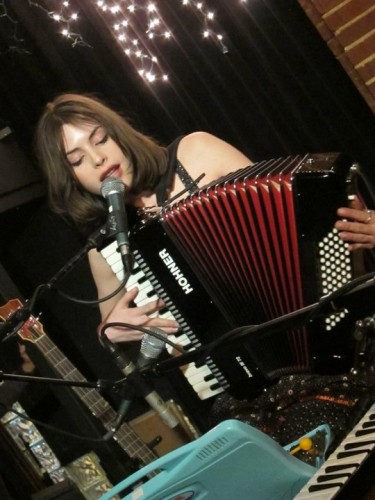 The set’s only real distraction (besides the whistling, hooting old coot behind me) was unfortunately Miss Kemp Muhl herself. While she did a lovely job singing and playing an array of instruments, her constant posing, lip pouting, lash-batting, and licking the corners of her mouth coquettishly was distracting. It seemed like she was unable to turn the model switch off and just play. Perhaps it was intentional, kind of reinforcing her Lolita role in the group. At one point between songs Sean mentioned he used to make fake IDs when he was in high school. Charlotte responded “Where were you when I was a teenager?!” An awkward silence followed…then Lennon replied “Uh, didn’t we meet when you were still a teenager?” Yeah. However, I doubt that any male in the audience was bothered similarly by her antics. 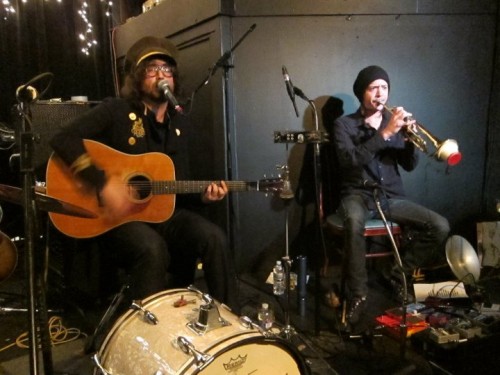 The group’s main set finished with a beautiful rendition of ‘Dead Meat’, the only song in the set from Lennon’s solo work. The dark lullaby was set off perfectly with Kemp Muhl’s glockenspiel tinkling like a music-box. For an encore Charlotte invited an old friend onstage for two songs which sounded appropriately folksy for a coffee-house setting. The last song, performed just by Lennon and Kemp Muhl, was the first song they wrote together; the lush vocal daydream ‘The World Was Made For Men’ and it was a perfect curtain drop on their colorful set.

* Alexia plays the cello in the DC band, The Torches.