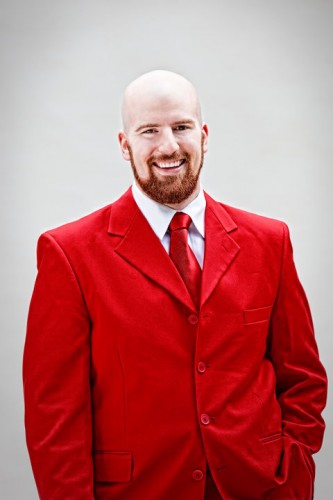 Once a month, on Saturday nights, Christian Hunt can’t be missed. He’s the guy in the bright red suit hosting the Capital City Showcase at the DC Arts Center in Adams Morgan. Hunt is a District native. He was born at Georgetown Hospital and raised in Glover Park.

“It’s funny because there are so many transients here that I’m like a white squirrel, because I was born and raised in DC, still live in DC, and root for all the DC sports teams, though I pretend the Redskins don’t exist. As cheesy as it sounds, DC is my home and it always will be,” Hunt said.

Hunt took a few minutes to give We Love DC the low-down on why he thinks his hometown is “the most beautiful city in the world.” He might have lived in Boston during his college years but according to Hunt, the District is far from being a tourist trap.

Rachel: So tell me about this Capital City Showcase. It’s an evening that showcases a variety of local performance artists. How did the project get started?

Christian: I’ve been performing since I was 10 years old. Whether it was doing plays, playing piano, or singing in chorus, I was always on stage. At the end of college, I started dabbling in stand-up comedy, but when I started working I put it all on the shelf. So after years of not performing at all, I started to get the itch again. I remember being up late and watching infomercials for The Midnight Special, which was a variety show from the 1970’s that featured the best acts of the time. And I thought to myself “Why doesn’t something like this exist anymore?”

I also grew up watching the old DC20 channel, which featured local programming, like all of the kids shows hosted by Captain 20 (if you grew up here you know what I’m talking about). And again I thought “Why is there no real local programming anymore?” So I figured it would be really cool to fill both of those voids with a live variety show that featured all of talent that DC has to offer. And The Capital City Showcase was born. 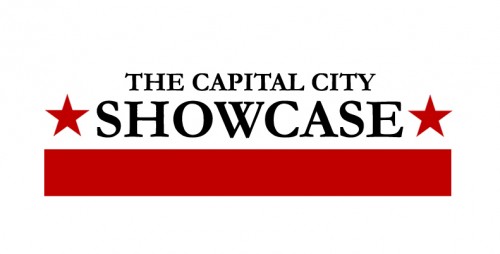 R: Have there been any performance that you remember blowing you away?

C: We have been really lucky with the amount of incredible performers that have come through the Showcase.  In one show, for example, we had Seaton Smith and Hampton Yount, who got their start here in DC but are touring all over the country and were phenomenal on the Showcase.  In that same show, we had rapper e-dubble who did a track for NBC’s “Parks and Recreation” and he had an awesome set on the Showcase.  I can say with the utmost sincerity that every single person who has come to see a Showcase has gotten their money’s worth.

R: What are your goals for the Capital City Showcase?

C: Eventually I want the show to stream live as opposed to simply being taped live, that way you can share in the live experience even if you can’t make the show itself.  My ultimate goal is for the Showcase to be as much a part of DC culture as the Smithsonian, go-go music, and Ben’s Chili Bowl.

R: How would you describe the local performance scene for artists looking to book shows? Do you feel like the city needs to get back to their roots and create more opportunities for artistically inclined performers to continue to work here?

C: I would say it’s okay.  I think that if you’re a young performer, you can find places to play, but there’s simply a limit to how far you can go in this area.  The real problem is that there is a very distinct ceiling.  Take comedians, for example.  Once they get to a certain level, it’s pretty much Gospel that you have to move to either LA or NYC, which is a shame.  And it’s not that I have anything against LA or NYC, it’s just that I’m sick of hearing that “You have to go there” or “That’s where the scene is”. Bull.  The beauty of the Internet age is that artists are working together like never before.

Young artists can promote their shows and other artists’ shows and not have to spend a fortune to get the word out.  I think if we wait for “the city” to create opportunities for us, we’ll be waiting a long time.  It’s up to us to use the amazing talent we have in this area and continue to grow the overall scene.

R: So how about this city beyond the Capital City Showcase? If you were to ever leave the District, what would you miss the most?

C: I went to school in Boston and that’s my second favorite city.  If I had to live somewhere else it would be there.  I would miss the view of DC the most.  I love the fact that DC doesn’t have monster skyscrapers and that you can go on the roof of a lot of apartment buildings and see the entire city.  DC is the most beautiful city in the world. Take THAT, Paris!

R: How about bars – where do you like to go to throw back a few brews with your buddies?

C: My favorite bar in DC is Breadsoda. Great atmosphere, great bartenders, A+ all around.  After they close, I hop (or stumble as the case may be) over to Bourbon – Glover Park, which is equal in overall awesomeness.  I’m lucky to have two dynamite places right in my backyard.

R: Here’s a biggie: do you see D.C. as more of a tourist trap or unique city with more to offer than monuments and museums … and why?

What jerk-off says DC is a “tourist trap”?  A tourist trap is when they charge you 10 bucks to watch some monkey scratch itself on the side of the road on the way to Poughkeepsie.  Forget the fact that the United States Government is run here and all those “monuments and museums” are 100 percent free.  There is more happening in DC now than ever.

We’ve got all four sports teams, one of which is actually good.  Take it from someone who knows, if you like music, comedy, theater, jugglers, burlesque dancers, or magicians, and you can’t find it in DC, you’re not looking.  And speaking of music, don’t forget that the DC Punk Scene has been one of the best in the world, not to mention that it’s the birthplace and home of Go-Go (Fugazi and Chuck Brown ring any bells?).  It’s the best city in the world and I’m proud to say I’m from the CITY of the District of Columbia.

R: If there was one thing you would want the world to know about the District, what would it be?