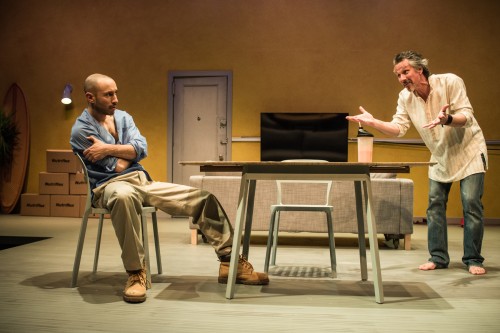 When the WeLoveDC crew previewed this year’s theatre season, Jenn made note that Studio Theatre’s production of The Motherfucker With The Hat would surely stand out due to its R-rated name. I can assure you that the adult content doesn’t stop with the title, during the show you can expect the F-word to be tossed about like a football. There’s also an entire scene that features character Ralph D (Quentin Maré) in full frontal nudity. But the show is more than just shock value, it is actually a raw and jarring exploration of addiction, ambition, and recovery.

All appears to be on the up and up for Jackie (Drew Cortese) and his childhood sweetheart Veronica (Rosal Colón). Fresh from a stint in prison, former con Jackie is trying for a fresh start. He now attends AA meetings and opens the show with news of a brand new job with FedEx. Bearing gifts of roses, chocolate bars, and movie tickets Jackie woos Veronica and their celebratory date night is about to begin. That is until Jackie finds a hat that does not belong to him. His discovery of the hat and the accusations of infidelity that follow set in motion the rest of the story. With his relationship now on the rocks Jackie seeks help from his AA sponsor Ralph D, also a reformed addict who has turned from the bottle to a life of smoothies, yoga, and philosophical maxims. Ralph is also trying to convert his wife Victoria (Gabriela Fernandez-Coffey) to a more sober life but gets nothing in return but her scorn. Together they all deal with their own inner demons and struggle to put together what was blown apart thanks to a hat and the Motherfucker who left it at Veronica’s apartment.

Dependency is a theme to watch for in The Motherfucker With The Hat. All of the characters are dealing with some sort of addiction or obsessive behavior ranging from drugs (Jackie) to sex (Ralph). Even Jackie’s cousin Julio (Liche Ariza) is a self-proclaimed gym rat who constantly works out so he can become a “Van Damme.” The act of recovering from addiction does not instantly make one a saint. There is a duality in the each character’s post-addiction morals, even though he’s traded in liquor for a nutritional smoothie Ralph admits that the yoga and the surfing are all, “things that assholes do.” Even sober Jackie makes choices that are less than ideal and threaten his ultimate goal of happiness. Where one vice is silenced, another rises up to take its place.

The sparse set designed by Debra Booth reflects the impoverished living of Nuyorican New Yorkers. Still Booth finds some opportunities for some stellar stagecraft with an on-stage working shower and a large plasma TV that moves on and off the set thanks to a system of pullies.

Cortese does a fine job as the hot-headed Jackie and his scenes with Mare are the highlight of the performance. In the midst of all the moodiness, Ariza is a wonderful comic relief as Cousin Julio. He plays up the gym pumping, foodie obsessed, somewhat ambiguous character just the right way to get laughs without going over the top.

Like his work on Studio’s Superior Donuts, director Serge Seiden weaves yet another dark yet humorous tale in the urban jungle. The fall of Jackie in both sobriety and romance leaves him stripped and vulnerable but he’s not the only one. At the end we all see into each character’s true self as we witness their various dreams fail to be fully realized.

This show is more than an interesting title, it is a look at the road to recovery that isn’t straight but full of twists and turns and bumps that cause you to fall off the wagon. In the process we learn that people are different than you may have thought but in the play’s final moments, playwright Stephen Adly Guirgis offers a tiny bit of hope that there maybe a love that can survive it all.