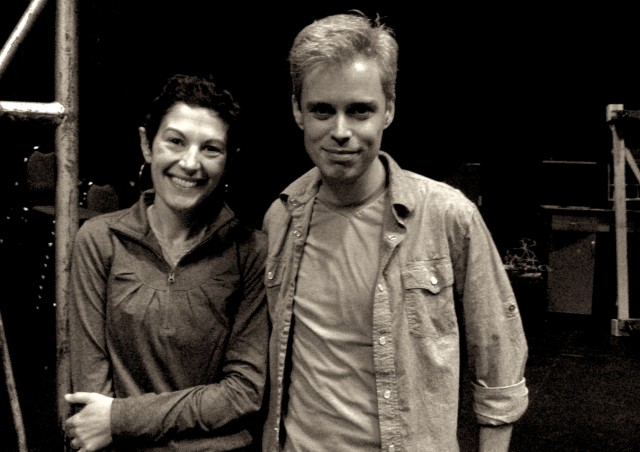 Jon Reynolds: I think the key difference in that meeting from a traditional theater’s season planning meeting is that we are looking at what kinds of projects might we want to create in the future. Generally we think in terms of 2-5 years out.

JR: …or it could be we’re having meetings sporadically to talk about a show concept or idea.

RG: Then we have “pending projects.” We’re not actively working on them. Those are things that might someday be moved up into things we are actively working on. And then we have “future projects,” which is: “I was reading this great article! Maybe we can do a show about the idea of crossroads!” And everyone goes, “That’s interesting,” and now it’s officially on the list.

JR: We sometimes use the word “zygote.” And many things never leave that list.

RG: The process is largely consensus-based. It’s about getting people on board for a project. It’s pretty clear when you’re pitching something and everybody is like,

JR: And when an idea does catch on, you can usually tell right away. It gets everyone’s imagination fired up.

JCM: What exactly is your role with dog & pony dc?

JR: We have two positions in the company. Our position we call “Ring Leaders,” and it basically means we take a leadership role in the company. And then we have what we call “Conspirators,” which is analogous to what other companies would call company members. All of them have different areas that they focus on, but everybody has a hand in essentially every aspect of production.

JR: I think of us as facilitators for realizing the vision of the whole company.

RG: The three of us are co-producing artistic directors. That’s the equivalent. If you had three Howard Shalwitzs or three Molly Smiths running an organization…

JR: Except that would be totally different.

JR: I would like the cloned Howard Shalwitzs to meet the cloned Molly Smiths. And they could form one baseball team.

RG: If we put aside our size, I would say the biggest thing is that people say, “Oh! You’re the one who does the ‘audience participation’ shows. I hate that.” And, no, really it’s not like that.

RG: As our audiences have grown, that barrier has decreased because the reviewers are doing a really great job telling people that no one is forced. And we find the very first people to come in and say, “I don’t want to participate,” are the very first people to jump up and start participating; and they go tell everybody, “I didn’t think I’d like it but I totally did!”

JCM: How have you seen dog & pony change over the last five years or so?

RG: You catch us at this wonderful growth point. If you look at the stages of youth development, vast amounts of changes in the human body are there from birth to six. So we’re able to say, “We weren’t walking before and now we are!”

JR: Just wait till we hit puberty in three years…

RG: The concept of audience integration, our process for developing shows, our desire to create wholly new works, our move away from a focus on classical texts and narratives – I think it’s about the clarity of vision and the type of work. It feels like every few months we have a better understanding of what the possibility of audience integration can be and how it can be changed and manipulated.

JCM: What is one show would you likely never, ever produce at dog & pony dc?

RG: We would never do Oklahoma! Which means in two years we’re doing Oklahoma!

RG: If we did that it would have to be so intentional.

JR: If we did that, we would frame that traditional playgoing experience with the entire staff of the theater – the box office, the ushers – as characters who have their own story happening that interrupts the show and is part of the show. Which means it’s not a traditional theatergoing experience.

How do you plan ahead how to make sure theatergoers don’t feel isolated or nervous at your shows?

RG: Audience integration is planned from the moment we start talking about the show. That can be very conceptual at first, but ultimately it becomes, “How do we create an environment over the course of the experience to make people comfortable enough and invested enough?”

JR: We have a series of thresholds for audiences to cross that are easy and accessible and inviting.

RG: We call it the Low Threshold Involvement Technique.  (For example) in Beertown, it’s the dessert potluck, the T-shirt, the pledge, singing a song you don’t know as a group.

JR: It’s all designed to build a sense of trust for the audience and a sense of unity for all of us.