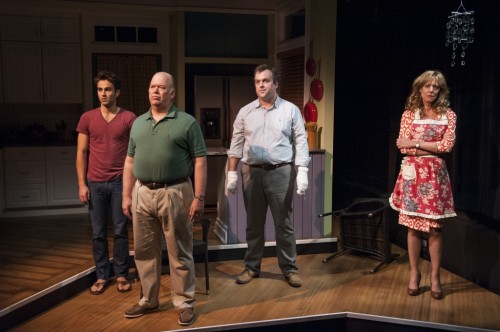 After Really Really sold out and wowed crowds at Signature Theatre last winter, up-and-coming playwright Paul Downs Colaizzo is back with another new play. This time instead of dissecting millennials, Colaizzo sets his sights on a more affluent crowd in Pride in the Falls of Autrey Mill. Starring Golden Globe and Emmy winner Christine Lahti, Autrey Mill is a powerful character-driven dramedy that explores conventional human needs in an unconventional setting: a luxury community where only the elite of the elite reside.

The play is set in the present day inside the home at The Falls of Autrey Mill, where the homes are adorned with Roman columns and the families have matching polos with the neighborhood crest emblazoned on the front. A cursory search reveals a real-life neighborhood in the Atlanta suburbs with a similar name.

As we know, money doesn’t buy happiness. Within the immaculate walls of this home is a family falling apart at the seams. Matriarch Carly (Lahti) is in the epicenter of the earth-shattering series of events that threatens to reduce her family to rubble. Under the pressure of keeping up with the Jones (better said than done when your neighbors are as wealthy, if not wealthier, than you) and raising the conventionally perfect family, Carly cracks the worst of them all. As her son Chad (Anthony Bowden) comes out of the closet and her other son Tommy (Christopher McFarland) decides to drop out of law school for his current job as a waiter she reacts with fanciful denial. The measures get even more extreme when her marriage with husband Louie (Wayne Duvall) takes a turn for the worst.

Michael Kahn (artistic director of the Shakespeare Theatre Company) takes Colaizzo’s words and brings them to life with same mixture of drama and comedy that made Really Really a success. The failures in the family are personified in humorous fashion through the home, which takes its toils as the show goes along. While I’m not sure why Colaizzo decided to go in a certain direction with Tommy, specifically his hands, it does deliver some laughs. Colaizzo is great at breaking up drama with a well-placed one-liner or slapstick bit.

Great drama is what Colaizzo delivers with Autrey Mill. Lahti is surrounded with a great supporting cast and compelling storylines; it’s clear that she’s firmly in the spotlight and she does shine in this performance. However, as a whole there are moments where it feels as if there are one too many ingredients in the casserole. In particular, a subplot between the two brothers seems wedged in there. In the end, the show is all about the pride, not of community of The Falls of Autrey Mill, but of Carly, the housewife diva who wants to have it all but ends up with nothing at all.