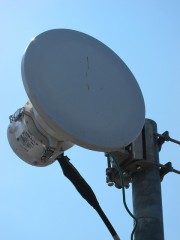 You know what I love about wireless standards? They are so vague and undefined. If you’ve ever shopped for a wireless router and gotten confused over 802.11g vs 802.11n then you know what I’m talking about.

The same confusion and arguments are around for wireless phone speeds as well. Today Sprint announced that Washington, DC among 68 other markets will now have 4G enabled networks for those snazzy Sprint 4G phones out on the market.

END_OF_DOCUMENT_TOKEN_TO_BE_REPLACED Fountain Feet by me

I’ve been a loyal AT&T/Cingular customer for many, many years now and I have no major complaints really.  Sure, sometimes my calls get dropped when I drive under certain bridges in town, but overall I’ve been a happy customer and I love the idea of rollover minutes (even though I never seem to use them).

I’m also a gadget junky.  I’ve been reading about the Samsung Omnia for months now which was rumored to be released by AT&T in the US market.  Unfortunately it was not and Verizon is the only carrier offering the phone.  I suppose I could buy it unlocked on eBay and continue to use AT&T, but the easier thing to do might be to switch to Verizon.