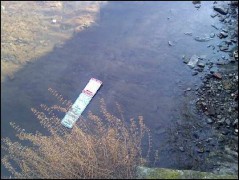 Someone in Georgetown is clearly not a fan of the new parking regulations that took effect in January. And I have to admit the addition of Saturdays has been the bane of my existence, however instead of throwing signs into the historic C&O Canal, let your voice be heard by contacting Mayor Fenty, your Ward representative and/or your ANC with your complaints/comments/suggestions. 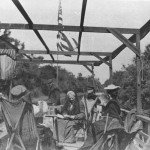 This Saturday from 6:30-9pm, the National Park service will host the 13th Annual Life & Death on the C&O Canal at the Great Falls Tavern Visitors Center in Great Falls, MD.

Volunteers and park rangers will take visitors on a one-hour journey back in time, and recreate the trials and tribulations experienced by the men and women who built, lived and staffed the canal during its 96 year long history. Every interpretation is based on documented facts or legends, and interpreters will present various 15 minutes programs throughout the evening.

Reservations are recommended and the program is not for young children.  Ticket prices are $6 for adults, and $4 for seniors and children (4-14).  Call 301-767-3714 for information and reservations.