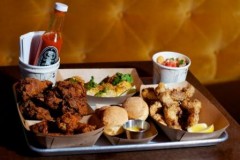 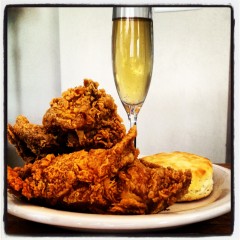 So you need a good date spot. Something that’s more than just a drink but less than an eight course tasting menu while violins play in the background. That’s where Cork Market & Tasting Room comes in. The restaurant on 14th street introduced Sunday fried chicken and champagne dinners this past weekend.

Chef Kristin Hutter serves up her fried chicken (which was named in Bon Appétit magazine’s “Top 10 Places for Fried Chicken”) along with champagne on Sundays* from 6 to 8 PM in the market’s upstairs dining room. You and your date (friend, dining companion, whomever) can feast on half of a crispy fried chicken along with side dishes such as biscuits and asparagus salad and two glasses of the bubbly stuff.

Reservations for the Sunday fried chicken and champagne dinners must be made 24 hours in advance by calling 202-265-2674 or by emailing tastings[at]corkDC.com. The dinner for two is $75, not including tax and gratuity. Cork Market is located at 1805 14th Street, NW.