To wit, in December, General Manager Ernie Grunfeld traded Gilbert Arenas and his horrendous contract to the Orlando Magic for the slightly less odious commitment made to Rashard Lewis. Two months later, with the NBA’s trade deadline approaching, Grunfeld swung a deal with the Atlanta Hawks that brought Mike Bibby and two promising young players to D.C. in the persons of Jordan Crawford and Mo Evans. Grunfeld then became even more fortunate when Bibby became so desperate to play for a contending team (eventually settling in Miami with the Heat) that he passed on all of the $6.2 million the Wizards would have owed him in 2011-12. END_OF_DOCUMENT_TOKEN_TO_BE_REPLACED “We’ve lost enough tough ones,” Flip Saunders said ruefully after the game. “We deserve a little bit of luck. That last one was definitely pretty right on.” END_OF_DOCUMENT_TOKEN_TO_BE_REPLACED The incident began innocuously enough, as Zydrunas Ilgauskas grabbed a loose ball at the top of the key and was defended by Wall. As Ilgauskas turned to face the basket, the Wizards rookie got right into the Lithuanian’s personal space, and Ilgauskas responded by nudging Wall twice with his right elbow. Wall took a futile swipe at the ball as Ilgauskas brought it over his head, an action which left the Miami man’s midsection exposed. As Wall turned to face up to Ilgauskas, television replays showed that the Kentucky alum pursed his lips, picked a spot, and let fly with a right cross to Ilgauskas’ ribs at the same instant that the 7-foot-3 center reached out with his left arm to shove Wall further back. END_OF_DOCUMENT_TOKEN_TO_BE_REPLACED

Looking back on the Winter Classic, we saw a Caps team that continued their first period struggles, their second period explosion, and a third period full of fight. That’s been this Capitals team all season long, and until they can figure out their first period struggles, I think they’re not going to be strong contender for Lord Stanley’s Cup. There’s much to work on this season, and still a good amount of time to see it happen. END_OF_DOCUMENT_TOKEN_TO_BE_REPLACED

One good thing to say about the Wizards is that they are competitive.

They hung with the high-flying Heat a couple weeks ago before blowing it at the end. They gave the Bulls a good game a couple of days later prompting Chicago coach Tom Thibodeau to praise the young team. Against the Hornets on Saturday, at one point they held a 13-point second quarter lead. Then Chris Paul, Trevor Ariza and Emeka Okafor asserted their will in the second half of the contest to claim a New Orleans victory, 92-81 at Verizon Center. END_OF_DOCUMENT_TOKEN_TO_BE_REPLACED

Happy NBA 2K11 day basketball fans! While you maybe lining up to get the latest 2K b-ball title, excited to play as Michael Jordan (before he joined the Wizards,) let’s not forget that the real-life Washington Wizards can still be as electric as any video game franchise.

Thanks to John Wall.

Just take a look at this clip of John Wall from the Fan Fest scrimmage: 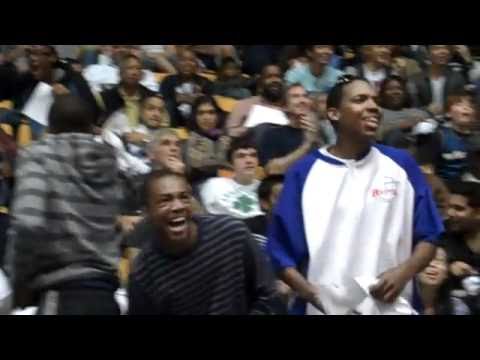 Can the 2K11 version of Wall do this? Maybe, but it’s way more fun to see it in real life.