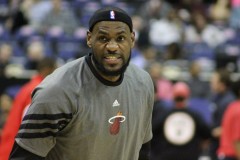 LeBron didn’t put up superstar numbers last night, but showed Washington, DC why he’s one of the NBA’s best.

Late in the second quarter Chris Bosh rebounded a missed shot from Nick Young and passed it to James. Racing down the court James passed it to Dwayne Wade who lobbed it up to James for an amazing slam dunk. It’s the kind of play the demonstrates the synergy that can happen when Miami’s Big Three are running on all cylinders.

“I think we’re probably 90 percent on the alley-oops this year,” James said after the game explaining that he’s not too concerned about showing a little pizzazz during the game. Miami Coach Erik Spoelstra commented after the game that he’d like to see the duo not get too fancy.

“We want to be efficient, and that’s the most important thing.”

However it didn’t take all three to be on top of their game as the Miami Heat beat the Washington Wizards 106-94. James only put up 18 points in what looked like a game he coasted through. Instead the production was left to Bosh (24 pts) and Wade who scored 26 points for the night- 18 of them coming in the first half where Wade put on an amazing second quarter show.

END_OF_DOCUMENT_TOKEN_TO_BE_REPLACED The incident began innocuously enough, as Zydrunas Ilgauskas grabbed a loose ball at the top of the key and was defended by Wall. As Ilgauskas turned to face the basket, the Wizards rookie got right into the Lithuanian’s personal space, and Ilgauskas responded by nudging Wall twice with his right elbow. Wall took a futile swipe at the ball as Ilgauskas brought it over his head, an action which left the Miami man’s midsection exposed. As Wall turned to face up to Ilgauskas, television replays showed that the Kentucky alum pursed his lips, picked a spot, and let fly with a right cross to Ilgauskas’ ribs at the same instant that the 7-foot-3 center reached out with his left arm to shove Wall further back. END_OF_DOCUMENT_TOKEN_TO_BE_REPLACED