“The opportunity presented itself this week and opportunities don’t come around that often in the NBA. We looked at it and studied it and thought it was the best interest in our team to make this move in the short term and the long term.”

When asked how this set the Wizards up salary-cap wise heading into 2012 he responded with a smile and “well.”

“It sets us up much better obviously for when Gilbert would be in his last year,” Grunfeld said. “Now, that amount comes off our books.”

Grunfeld that this is one of the final pieces in the rebuilding that the Wizards have been going through the last couple of seasons. The thing about rebuilding is that you have to strip away the existing foundation before you can build something new in its place. Grunfeld has certainly achieved the tearing down part in shipping Arenas out. Now it is time to see what he can build around Wall heading forward.

The Wizards now only have three players left on the roster from this time last season in Nick Young, JaVale McGee and Andray Blatche.

“You never know how how things are going to come down in this league,” Grunfeld said of all the moves that have been made over the last year in sending away players like Caron Butler. “We made a decision that that group had its run and it was time to go in a different direction.” 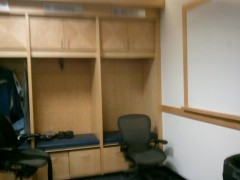 The longtime locker of Gilbert Arenas at Verizon Center empty after trade to Magic..

Arenas is averaging 17.3 points, 3.3 rebounds and 5.6 assists per game in 21 games this year averaging 34.6 minutes per game. The 21 games represent nearly half of the 47 total games that Arenas played the last three years combined battling knee and … legal issues.

“I spoke with Gilbert this afternoon, told him about it,” Grunfeld said. “He thanked us for the opportunity, thanked us for everything. We spent seven years of our lives together here and he is excited about a fresh start and a new opportunity.”

What say you D.C.? Happy to see the dramatic Arenas leave town or is it sad to see one of the most popular players in franchise history unceremoniously swapped? Let us know in the comments.