Coming into tonight’s final game against the Magic this season Washington was 0-3 against Orlando. However thanks to a career performance from Kevin Seraphin (and a Dwight Howard-less Magic team) the Wizards pulled out their second win in a row 93-85. Tonight’s win follows a victory against the hapless Charlotte Bobcats Monday night.

Without Nene and Trevor Booker both out with  plantar fasciitis, the Wizards have leaned on big man Seraphin more in recent games and he has responded well. He led the team with a career high 24 points, 13 rebounds, and 4 blocks in the win.

Also in the mix were Jordan Crawford (21) and John Wall (15). Jameer Nelson led the Magic with 19 points.

After the Magic took a 29-18 lead in the first quarter, the Wizards hung on tying the game at halftime and breaking away with 10 minutes left in the final quarter thanks to a bank shot from Seraphin.

END_OF_DOCUMENT_TOKEN_TO_BE_REPLACED 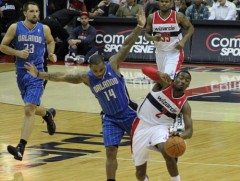 After ending the first half of the season with another disappointing loss, Wizards Point Guard John Wall hoped that the team would spend the All-Star break clearing their heads and starting the second half more competitive than their lowly 7-27 first-half record would suggest.

Well it’s still more of the same. After losing a nail-biter in Milwaukee, it wasn’t close as the Wizards let another game slip away tonight in a 95-102 loss to the Orlando Magic.