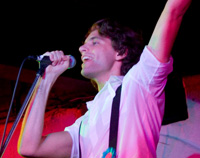 I first became aware of Mika the same way I’ve been finding all my musical obsessions lately- listening to Ethel on XM. I was driving to my soul-destroying then-job one morning in early February, trying not to let the dread impose on my commute, when a bouncy song called “Grace Kelly” floated through my speakers. I nearly drove off the road, so involved was I in getting my rock on. If you can imagine Freddie Mercury reincarnated as an early-20s British/Lebanese kid with crazy curly hair (okay, not a stretch) with some vintage Elton John, George Michael, and ALL of the Scissor Sisters mixed in, you can probably imagine what the rest of the album is like.

I finally got to see him live last night at a sold-out show at the 9:30. I couldn’t tell you about the opening act because, well, I skipped it. But Mika himself did not disappoint.

One of my favorite things about Mika is that even as he’s engaging with reckless abandon in pop theatricality, he does it without a trace of irony, while both acknowledging it and inviting the listener to abandon their hipster pretense and just enjoy the music for what it is.You can’t help but accept the invitation. (edited to add: Via Marc in the comments, here’s a post by the “Big Girl” dancer. I thought that was Mika’s family sitting near us…)

This post appeared in its original form at DC Metblogs
The concert was full of future-superstar moments like listening to hundreds of people yell, “’cause a REAL WOMAN needs a REAL MAN HERE’S WHY” during “Big Girl (You Are Beautiful),” and the extended high note he held during a cover of the Jackson 5′s “I Want You Back” that made my throat close up to just contemplate. And of course, it was terrific when he stopped singing “Grace Kelly” and let the crowd take over for several lines, as they mimicked his accent all the while. But my favorite moment of the show was a bit more poignant.

After the closing notes of “Billy Brown,” a song about a married man who falls in love with another man, and then runs off to Mexico and meets a girl, Mika rested his hands in his lap, looked at the crowd, and said very quietly, “When I did the demo of that song, my record company said, ‘You can’t release a song like that in the United States!’ I wish they could see you all singing along with me.” Not a hint of bravado or pretense, just a brief glimpse into the mind of an artist who is still very starstruck over his own early success.

And then he was off again- stepping out from behind the piano, jumping up and down between choruses, and enjoying the silliness as much of the rest of us.

No recap of the concert would be complete without a description of the encore, however. Mika and the band left the stage more or less immediately after the closing, “Cha-ching…AH!” of “Grace Kelly,” but everyone knew there was still one more song to be performed. A few minutes later, the lights came back up on the stage amid the crowd’s chants of “MI-KA! MI-KA!” and a recording started to play… of “The Teddybear Picnic.” And then, I shit you not, several people dressed in barnyard animal costumes skipped out on stage, formed a circle, and sat down to have, presumably, a picnic. Only then, the cow took its head off, and, um, surprise? It was Mika. The other animals revealed themselves to be the band members, who took their places (still wearing the now-headless costumes) to play “Lollipop,” accompanied by confetti cannons, balloons released and bounced back and forth by the audience, and additional costumed characters frolicking onstage.

I think I may now have seen just about everything. But I’d go back and see it again in a heartbeat.