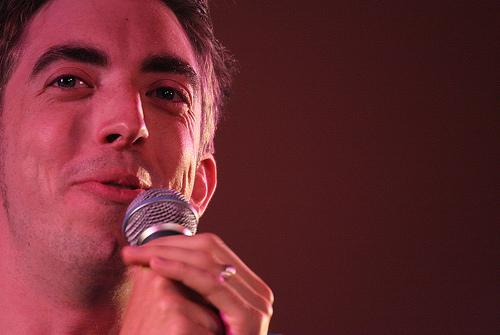 As I’ve been enjoying my own tentative steps into the world of standup comedy, I’ve come to discover that a lot of my favorite comedians are locals, people who you may not see on Comedy Central, and who may not even be headlining a local club, but who I never fail to think of when someone asks me who I find funny. One such comic is Jimmy Meritt, who I first saw with the Geek Comedy Tour last fall. He has his hands full- in addition to his appearances with the Geek Comedy Tour (which I’ll be sure to catch at Wiseacres later this month), he performs at comedy clubs around the Eastern US, and will be appearing with the “We Can Make You Laugh” Tour this fall. I highly recommend that you see him this week at the DC Improv, appearing with Brett Leake. View his calendar, and watch him in action online.

Jimmy was kind enough to answer some questions for We Love DC:

JM: I’ve always lived in the area. I grew up in Maryland and I live in College Park now. I’ve been active in the DC Comedy scene for about four years now, so that’s how long I’ve been making frequent city visits.

WLDC: What do you do besides comedy?

JM: I spend my mornings working at Fantom Comics. It’s right off of the Tenleytown Metro station. I’m a pretty big geek, so I love spending my mornings reading comic books. I’m also a drama teacher, and I work at an afterschool program.

JM: There’s two great open mics in the area that run on monday nights. Chief Ike’s Mambo Room, and the Spy Lounge both have great showcases, where you get a really intresting blend of brand new comedians, and scene veterans trying out new material. They both deserve much bigger audiences then they’ve been getting.

WLDC: Who’s your favorite local comic? Who do you make it a point to get out and see?

JM: Well, I’d hate to leave people out, since so many people on the scene are so great! But, there are a few local comedians who have been especially big influences on me.

Al Goodwin makes me laugh harder then anyone else in the area does, I’m a really big fan of his. I really enjoy his work because he’s got this perfect blend of being clever while still being silly, which a lot of comedians have a hard time pulling off.

I’m also a huge fan of Ryan Conner. He’s definitely one of DC’s best joke writers. He’s really brilliant at perfectly exploring every opportunity in a premise, and all of his jokes have a really brilliant logic running through them.

Andy Kline is also very high on the list. He’s really great at skewering a lot of the stupidity that happens every day, a lot of really excellent satire in his act.

Whenever I’m writing jokes and working on bits, one of the things going through my mind is if these three guys would think they were funny.

WLDC: Who first told you you were funny?

JM: Probably my parents. They were always really supportive of me growing up, and they’ve been incredibly cool about me pursuing comedy. I dropped out of college to try stand-up, and they’ve never given me a hard time about not finishing my education.

WLDC: Who are your influences?

My biggest influence is David Letterman, who I’ve been watching since seventh grade. When I was in middle school, my parents would have me go to bed at 9:30, then Mom would come into my room and wake me up at 11:30 so we could watch Letterman together. He’s another comic who is great at blending silly and clever, and he’s a master of joke writing and improvisation. I also don’t think there’s anyone who is more interesting to watch, even when he’s not being funny.

One thought on “Comedy in DC: Jimmy Meritt”