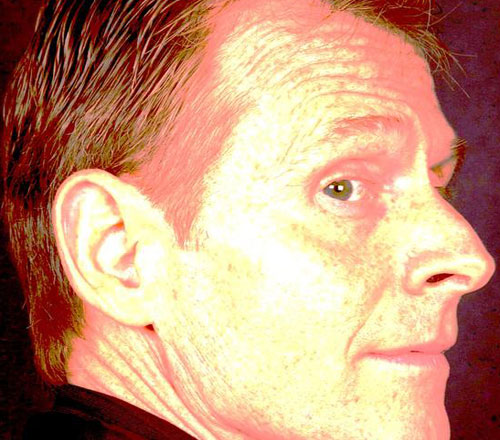 Roger Mursick is a standout in the local comedy scene- while most local comics I run into have day jobs and can only work on the road on weekends, Roger has been a working comic for 28 years, traveling to shows nationally as well as appearing at the DC Improv, Wolftrap, and the Laugh Riot at the Hyatt. While Roger has been a syndicated columnist, performed on Comedy Central, and written for The Tonight Show, he frequently does short sets at open mics and smaller venues around DC to stay sharp between corporate and national bookings.

Are you from DC? What do you like about performing here?

I am a DC native and began my comedy career in Washington. I must say that Washington DC has by far, the brightest audience in the country. It’s a mixed bag here. Some nights you’ll get the PC crowd that will take the fun out of it all, but for the most part there really isn’t a better or more informed audience than DC.

What’s your favorite room to perform in?

My favorite place to perform is a little room that Curt Shackleford runs in Bethesda at the Hyatt hotel. (He has a new room in Clarendon, Va called Ri Ra that’s a lot of fun too.) It’s a bright, informed crowd and the room is run exceptionally well.

I can’t say that I have a favorite local act. There does seem to be a comedy mill in DC churning out stand-up pods at a copious rate. But I’m not seeing a lot of real development with any one particular person. There are a lot of people with some good lines but no one with a complete act as of yet.

One of the guys I like and think is very talented is “Larry Poon.” I don’t know him very well (obviously, since I don’t know his real name) but he’s the only one that I’ve seen doing something different on the DC scene. He’s an acquired taste I suppose. Erik Myers is very funny as well. Lisa Fine is a good comic and writer. Jennifer Wardrop is a good joke smith and honest writer too.

Too many, in my opinion, are trying too hard to be edgy or in your face. They’re trying to impress their peers and that’s never good. Do it for yourself.

Who are your influences?

Well, the first guys I listened to were, George Carlin, Woody Allen, Kelly Monteith and Jay Leno BTS (Before the Tonight Show).

Tell us about your career.

Comedy is my only job. Early on, I was lucky to find something that I love to do. I stayed on the road working my way up the performer ladder. Going from MC to middle to Headliner. I never wanted a sitcom so I continued learning my craft out on the road. And agents started booking me to tour with stars as the opening act and then corporate gigs followed. In stead of being in one place a week at a time, I can fly in and do the gig and out the next morning. Great, if you are ADD like me.

One thought on “Comedy in DC: Roger Mursick”