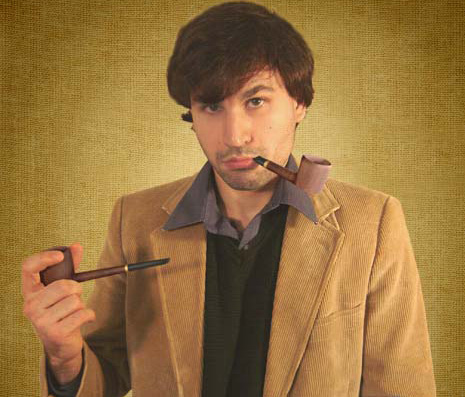 I’ve caught Jeff Maurer at the Hotel Topaz Thursday comedy nights a few times, and one of the things that always struck me is the control in his delivery- most comedians act like they’re telling jokes, which is fine, because hey, you’re at a comedy club. Jeff sounds like he’s telling a story to his friends at the bar, which just adds to the comedic value, I think. See for yourself; I particularly recommend the “Appetizer” clip. You can catch Jeff this week opening for Mike Birbiglia at the DC Improv.

Six years, non-consecutively. I moved around a lot growing up, but before DC I lived in the Norfolk, Virginia area. I move to DC the first time for college and ended up coming back for work.

WLDC: What do you do besides comedy?
I work for the Environmental Protection Agency. We were in the Simpsons movie.

WLDC: Other than the Improv, what’s your favorite place to perform in the DC area?
The Improv is great, but other good shows are at the Bethesda Hyatt and the Arlington Cinema Drafthouse. My favorite open mic is Thursday nights at Topaz hotel in Dupont Circle.

WLDC: Where’s your favorite place to watch comedy?
I like the Improv because the food and the wait staff are good even when measured by actual restaraunt standards, which makes them phenomenal according to comedy club standards. Topaz is a great place to go to see good comics in an intimate setting.

WLDC: Who’s your favorite local comic? Who do you make it a point to get out and see?
This is a tricky question because there are a bunch of people I could name, and there will be some hurt feelings if I give a list but leave people out. So, I’ll just settle on one name: Erin Jackson. As for the second part of your question, you don’t really ever “go see” another DC comic, because you see them all on accident all the time just by doing shows. But I always go see Patton Oswalt, Paul F. Tompkins, Todd Barry, and Jim Gaffigan when they’re in town – Oswalt and Gaffigan have DC roots.

WLDC: Who first told you you were funny?
My sister.

WLDC: Who are your influences?
The guys above: Patton Oswalt, Paul F. Tompkins, Todd Barry, and Jim Gaffigan. Some other names I would list include Brian Regan, Kathleen Madigan, Steve Martin, David Spade, Jon Stewart, Chris Rock, and Dave Attell. Of those, the ones whose styles are apparent in my style are probably Patton Oswalt, David Spade, and Jon Stewart. We’re all white guys standing in place and making fun of stuff.