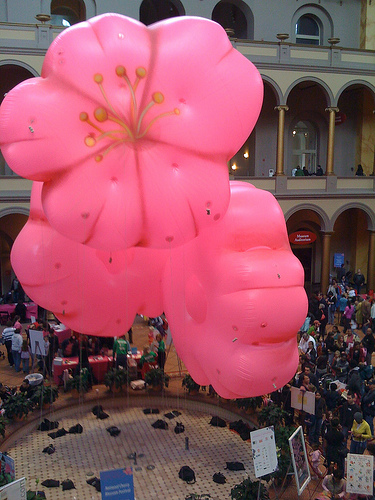 The Cherry Blossom Festival kicked off this past Saturday with a family day and the opening ceremony at the National Building Museum. The interior space of the National Building Museum is always pretty overwhelming, but you could see the stimulus overload on people’s faces the minute they stepped into the great hall. The fountain in the middle of the hall is drained and giant pink (and I mean pink, as you can see above) inflatable cherry blossoms are suspended above it, and all around are booths with activities and crafts for kids and people offering information and selling Cherry Blossom Festival-related wares.

At either end of the hall were stages, one for demonstrations of everything from vegetable garnishing to origami, and the other for all kinds of performances. The performance stage was my favorite part, specifically when the Washington Ballet Studio Company took the stage at a little before 3:00pm. The professional dancers were so graceful and wonderful, but then the choreographer invited kids between the ages of 3 and 12 to come up and perform. They blasted “Lady Marmalade” from the Moulin Rouge soundtrack and had a group of maybe 40 kids moving more or less in sync–so cute. 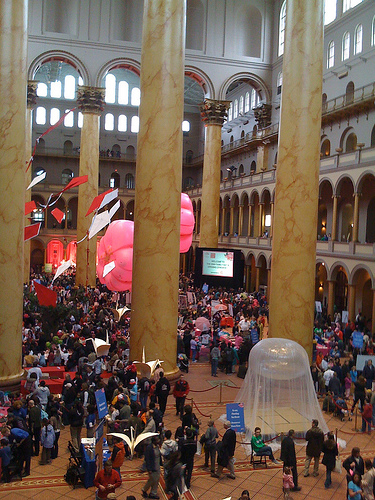 This being the Family Day, the activities were mostly for the little ones. They had a place to make and decorate your own tea house, try furoshiki (Japanese cloth-folding), and even an animation boot camp for the older kids. I would say the most popular stations were the one where you could go home with your own plant and the Target station where you could color a little bucket hat, though.

Finally, at 4:00pm, the activities stopped and the attention turned to the indoor performance stage. There were so many people there, and only a third of the hall was set up for seating. People were not only standing in the great hall to see, but also migrated up to the second and third floors in hopes of finding a good spot. Unfortunately, the further back you got, the more you missed: between the inflatable cherry blossoms and the 75-foot columns, it was near impossible to see anything, and the sound really didn’t travel too well in that giant hall. The Washington Ballet’s dance of the cherry blossoms was lovely, though, and the all-female drumming and tap ensemble was lots of fun.

The Cherry Blossom Festival continues through April 12, so there’s still plenty of time to catch some activities. Saturday, April 4 is the parade and street festival, and then smaller cultural activities will be happening during the week.