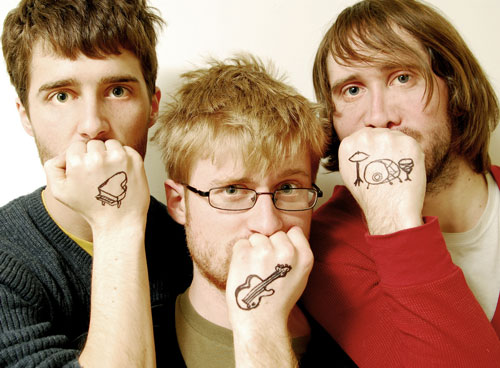 Jukebox the Ghost, courtesy of This Side Up Sounds

Indie pop/rockers Jukebox the Ghost formed in DC, but didn’t stick around long. After a few years in the area, they headed up to Philadelphia but still have love in their hearts for Ben’s Chili Bowl, among other things.

Admist their non-stop touring, I was able to grab guitarist/vocalist Tommy Siegel for some quick questions about the band, their kooky name, and their favorite things about DC.

Jasmine: How and when did Jukebox the Ghost form?

Tommy: The three of us started playing together in the fall of 2004 — Ben and Jesse lived near each other in their dorm [at George Washington University] and played together their freshman year. I had put up a flier in an attempt to start my own band that fall and they happened to call. We were called the Sunday Mail until the fall of 2007, when we changed our name.

What does your name mean and who came up with it?

Ben wanted ‘ghost’ in the title in reference to a passage from a Nabakov novel. I wanted ‘jukebox’ after hearing it in some rambling Captain Beefheart lyric. Jesse wanted ‘the’ because it’s his favorite word.

How long did you guys stay in DC and when did you move to Philadelphia? What was the reason for the move?

We all went to GWU for four years, and I also lived in DC during every summer of college doing historical reenactment for the National Park Service. We moved to Philadelphia for the cheap rent and ended up loving the city — the low rent there would make most DCers sick to see. We all live in a house there and can actually pay the rent with music because the cost of living is so low.

How does the music scene in Philly compare to DC’s?

It’s totally different. Most bands we know there sound like a cracked-out version of the Beatles. The house show scene is a lot bigger there too. Another big difference is the lack of a specific musical tradition like DC’s Fugazi/Dischord legacy. I wouldn’t say either city has a better scene than the other though, they’re both great in their own way.

Free museums and traffic. You figure out which one is our favorite thing and which is our least favorite.

Do you have any favorite places in DC that you make sure to stop by when you’re in town?

Ben’s Chili Bowl is a necessity when we play the Black Cat and the Argonaut is a must when we play at Rock and Roll Hotel. Great food there.

You guys have been touring like crazy lately with Ben Folds and now, Jenny Owen Youngs. How’s that going?

We haven’t been home or had any significant break since March 13. After the month of Ben Folds shows we flew out to England for two weeks of shows and flew straight back into the midwest for our month-and-a-half national loop with Jenny Owen Youngs. Right now I’m writing from Ben’s Blackberry in the middle of Nebraska on the way to Denver! GAHHHHH!

We’re actually having a ton of fun though. England/Scotland was two of the best weeks of our band’s history, and the Ben Folds tour was next-level insane.

Catch Jukebox the Ghost at the Rock and Roll Hotel Saturday, May 23!

One thought on “Interview: Jukebox the Ghost”