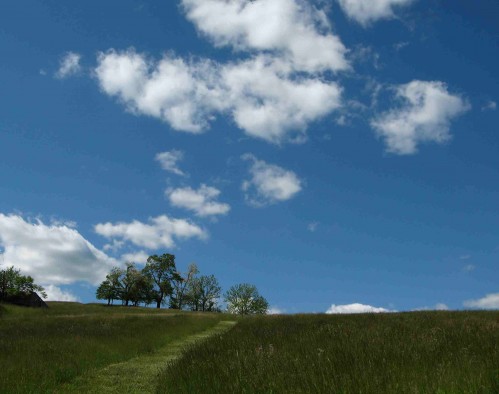 Sky Meadows. The name itself makes me think of rolling pastures, wildflowers, birds, and butterflies, all under puffy white clouds and a deep blue sky. But maybe that’s because I’ve been there.

This humble Virginia state park is close to the city, just over an hour’s drive west from DC. A historic house and picnic tables are there, and you can catch fun programs ranging from Celtic music to astronomy nights to an annual strawberry festival. But I go there mostly to hike.

These hikes are different from the classics in Shenandoah, such as Old Rag and White Oak Canyon. Their pretty, pastoral scenery gives them a gentler feel, and the trails meander in shorter, easier loops. To be fair, the beginnings are steep, but they rise up toward the sky through meadows of waving grasses and wildflowers. And they pass strategically placed benches that let you sit and look out at the farmlands, ponds, and softly curved mountains.

I’m going to recommend you go to Sky Meadows on a Saturday, and here’s why. Then you can make your trip a loop that includes picking up lunch at a delicious bakery on the way (it’s closed on Sundays) and ending with wine at sunset on a patio with a view (it’s open late on Saturdays).

To get there, take I-66 West to Fair Oaks, then hop on Route 50 West. Along the way, you’ll pass through the tiny, tiny town of Aldie. A historic mill is there, though it’s open only in the afternoons. If you really like wine, check out a cool little store called The Aldie Peddler. It sells primarily two things, Amish-made poly-lumber furniture, and wine. I know, odd combination, unless you consider that after enough wine, you might like a nice chair.

Anyway, I was lured in by the sign’s promise of 100 wines under $10. Most, not surprisingly, cost much more than that, but as store owner Wally explained, he likes to sell lower-priced wines too because he can’t afford to drink the $60 bottles every day. Fair enough. There are tons of wines, and throughout the store, he’s added little signs to the shelves to mark his favorites. Wally has lots of favorites. He pointed me to a couple of organic wines in the general vicinity of $10, one a French wine called Yellow Jersey in an eco-friendly recyclable plastic bottle, and they were pretty good. 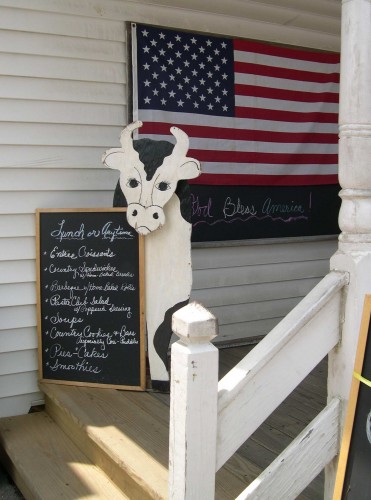 A few miles farther down the road will be Middleburg, and on the side street to the left of the Safeway (it’s a small town, you won’t miss it) is The Upper Crust bakery. This is horse and hunt country, so the bakery’s name gets high marks for creativity. It’s a cozy old building with a porch and a screen door and scrumptious-smelling air. Their cookies are good, their sandwiches are great, and if you happen to go when they have the yellow cake covered with old-fashioned maple frosting, by all means order it! 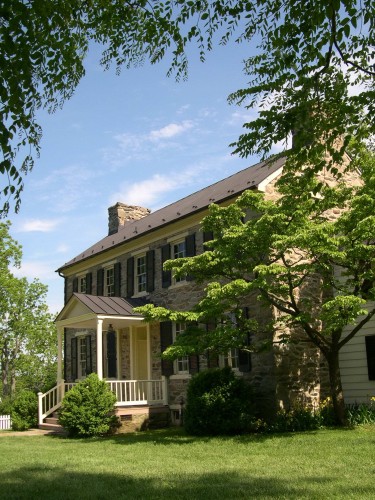 Once you have your tasty lunch, continue on Rt. 50 until you reach Rt. 17 South, where you’ll hang a left and drive a mile or so to Sky Meadows. Take lunch on your hike, or go around the other side of the Mount Bleak house to find a picnic table with a view. I like the one under the old golden plum tree.

When you’re ready to hike, you can choose from several loops described on the map (pdf), or make your own. Most are just a few miles long; hike the outer perimeter including the Snowden nature trail and you’ll log about six miles. Either way, you’ll start by rising into those wonderful meadows I mentioned earlier, then into a hardwood forest, where thick vines hang artistically from tree branches and drape over small stone walls. 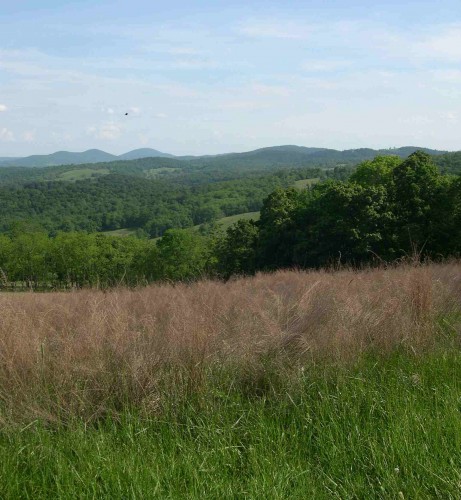 Now, I’m going to tell you a secret, but you have to promise to keep it to yourself: the Ambassador Whitehouse Trail. On your map (pdf), it’s that unmarked dotted line to the upper right that intersects with the North Ridge Trail, and higher up, the Appalachian Trail. Take it, and after an additional climb, you’ll emerge from the trees in an upper meadow, one just a bit wilder and every bit as scenic as the ones below. If you want to sing the Sound of Music song, I won’t try to stop you. Goodness knows I was making noise up there the day I saw the bear in the bushes, though my tune of choice was “The Bear Went Over the Mountain.” Wilderness survival tip: Sing that loud and off tune like I did, and you can keep anything at bay.

But seriously, you won’t need wilderness survival tips here. This is a relaxing hike, a place to stretch your legs, breathe some fresh air, and soothe your soul. 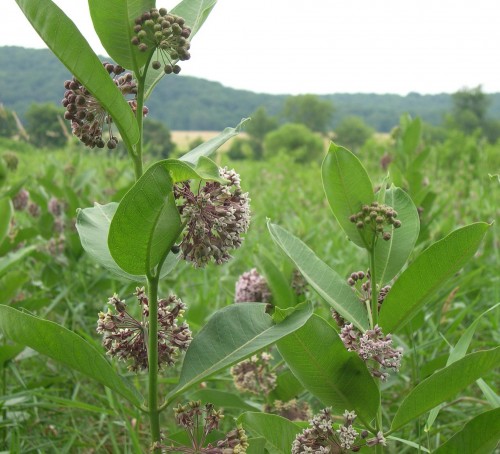 If you’ve not gotten enough hiking after doing your loop, or you’re as smitten with the place as I am, hop in the car, go slightly to the left and across Rt. 17 and walk the one-mile loop at the Bridle Trail section. I just discovered this one recently, late one afternoon. The path meanders alongside a stream then goes along the edge of some woods, with views out to open fields. The day I went, deer leapt through greenery, a groundhog waddled along in front of me, and fairy dust fell from the sky. Okay, so no Tinkerbell, but this little stroll makes a great nightcap, a cool down after a longer hike.

For a nightcap of a different kind, head South on Rt. 17 for about six miles, then take a left on Rt. 55 and immediate right on Rt. 55. Another mile will bring you to your final stop, the Barrel Oak Winery on your left. 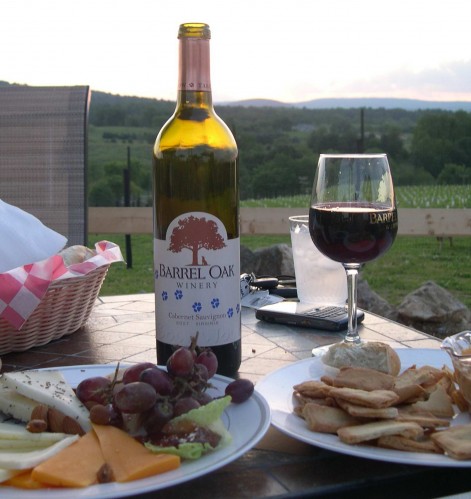 Now, I know very little about wine. That said, I think many Virginia wines are somewhere between bland and mouth-puckering, and I like everything that Barrel Oak makes. Most of theirs I out-and-out love. The fact that they’ve won lots of awards, some international ones, in their first year of operation means folks who know wine agree. And combining their wines with a late afternoon on their terrace, looking out at the sun setting over the distant mountains, watching the stars appear in the blackening sky and the moon rise from behind, is a pretty spectacular combination.

After all that, you can shoot right home on I-66 or splurge for dinner in Middleburg or The Rail Stop in The Plains and a night at a B&B where you can rest your blissed-out head. Happy trails!