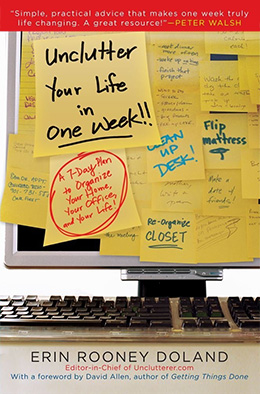 I’ve always had too much stuff. And not even stuff, but junk. I never know what to get rid of and what to keep. So Erin Rooney Doland is pretty much a superhero in my world. She’s the editor of Unclutterer, a riotous dinner companion, and the only parent I know whose house was not immediately overrun by baby stuff when the child arrived. She has a book out this week, Unclutter Your Life in One Week, and you guys, here’s how serious she is about this: She gave Tom and me an advance copy of her book, and when we asked her to sign it, she said, “Are you sure? If I sign it, you’re going to feel like you have to keep it after you’re done reading it.” Always thinking about purging stuff, even when “stuff” is her own book.  I thought I’d ask her a few questions about uncluttering and why she loves DC.

WLDC: So, how did uncluttering become a way of life? I mean, how did you decide you were so passionate about the topic that you could make a full-time job out of it?

Erin: My husband and I used to live on R Street between 14th and 15th Streets, NW, in an 850 square-foot condo. At the time, I had so much crap — and I’m being honest, most of it was crap — that we had to walk along a pathway to get from the bedroom to the kitchen. We never had people over and we were stressed out all of the time because the physical stuff weighed on us. One day, my husband reached his breaking point, and he asked me if I would consider getting rid of the clutter. I was overwhelmed by all of it too, and agreed that his idea was a good one. I spent the next six months doing research and purging and streamlining — and the stress just went away. I couldn’t believe how much of a difference it made in every aspect of my life. When I started writing for Unclutterer.com it was with the purpose of sharing with other people about my experiences. I never expected that it would become my career, but I am truly thankful it did. I love my job and the readers of the site and helping as many people as I can to discover the joys of an uncluttered life.

WLDC: I remember you saying that you took regular trips to Ben’s Chili Bowl when you lived near 14th and R. What’s your favorite change in the neighborhood since you lived there?

Erin: I love that the neighborhood has continued to experience growth. It’s such a wonderful part of the city, and I’m happy that people are investing in it. The new restaurants are definitely a draw — Marvin instantly comes to mind. We were just at Ben’s last week and the line to get in was longer than ever. It’s nice to see even the old haunts busy in this economy. U Street and 14th Street have so much to offer.

WLDC: You describe “clutter” as “any distraction that gets in the way of a remarkable life.” What do you think is the most remarkable thing about life in DC?

Erin: Spending quality time with family and friends and embarking on new experiences are things that I seek out for my life. DC has some of the best restaurants in the country, which make sharing an incredible meal with the people I love to be a simple and fun task. And, since I’m constantly looking for new things to do and try, I’m never at a loss for possibilities in DC. You can’t be bored in DC, and that makes for a remarkable life.

WLDC: Uncluttering is about cleaning up, sweeping out the trash, getting rid of the junk. That’s a metaphor we hear often about Washington, from “sweep the bums outta office” to Mayor-for-Life Marion Barry to Michelle Rhee on the cover of Newsweek with a broom in her hand. What DC figure needs a copy of your book the most, and why?

Erin: Oh, such a great question. There are a few members of the DC City Council who could use a copy of my book. For better or worse (and I contend better), the city of DC has changed a great deal in the past 20 years. However, some of the people on the Council haven’t acknowledged this. I don’t want to name names because that won’t accomplish anything, but I think it’s time for everyone on the Council to start being visionary and stop trying to come up with band-aid solutions to try to fix mistakes of the past.

WLDC: The local news is full of stories about DC institutions not living up to their full potential. How can the concept of uncluttering apply to organizations like the DC Public Schools?

Erin: The DCPS, for the most part, is a mess. I know that there are pockets of good things going on in some of the schools and in the administration — but these things are diamonds in a dark cave of mostly coal. Parents and students don’t respect the teachers and schools, teachers don’t respect their administrators, administrators think that their teachers aren’t worthy of respect, and the district itself is riddled with corruption. I don’t think getting rid of the entire system and starting fresh is the best solution since there are some good things there, but considerable sized chunks of the system definitely need to be overhauled and uncluttered. The system can be fixed — all is not lost — but I think as it is right now DCPS is disrespecting its student population by failing to provide them with an education equivalent to what they could get if they were living in the surrounding Maryland and Virginia communities. 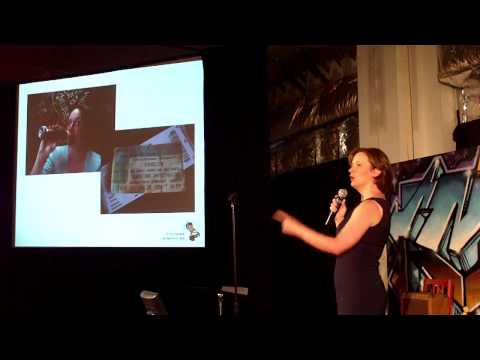 One thought on “She Loves DC: Erin Rooney Doland”