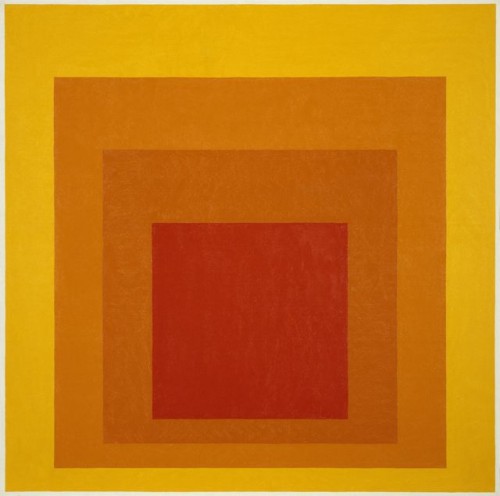 Josef Albers, “Homage to the Square: Glow,” (1966). From the Hirshhorn’s collection.

“We must teach each other… education is not first giving answers but giving questions.”  – Josef Albers

Abstract art is void of narrative.  The composition often speaks only through the viewers mind.  A type of understanding through speculation, providing the sort of simple canvas that the imagination needs in order to thrive.

Josef Albers (1888-1976) was a master of the subjective canvas, an explorer of color and an ambassador for the abstract form.

As a student, and later as a teacher, of the infamous Bauhaus movement in Germany – Albers was surrounded by modernity from the very start.  With the rest of his Bauhaus counterparts, Albers wanted to ultimately improve life through modern design. Albers’s first leap into the abstract movement was through his attempt (which was quite successful) to modernize the somewhat archaic stained-glass window.  His windows, which seem to have strictly followed the design principles for organization – hierarchy and grid, demonstrate Albers’s dedication and restraint, which would later translate into his legacy.

Albers is primarily regarded as an artist.  However, it was when Nazi occupancy of the 30’s forced the Bauhaus school to close and Albers to immigrate to the United States that Albers, the educator, began to shine.   As head of the art program at Black Mountain College in North Carolina, Albers found his teaching niche [and artistic niche for that matter] through a form of deconstructivism – breaking down the application of color in art through hands-on design.  By teaching his students the basics, Albers felt that he was ultimately facilitating his student’s future potential for innovation. Furthermore, Albers stressed that art could be created through nature, that all materials could carefully be pieced together to create a modern form.  Making art both more affordable and accessible to the masses – which was one of his lifelong goals.

Albers continued to hone his skill later as a fellow at Yale, where he developed into somewhat of an abstract extremist (okay, so that might sound a bit ‘extreme’ but he was a stickler).  A discipline to his theory that any color could be perceived differently depending upon its relation to another color, that any given relationship of colors could produce an abundance of uncertain affects. 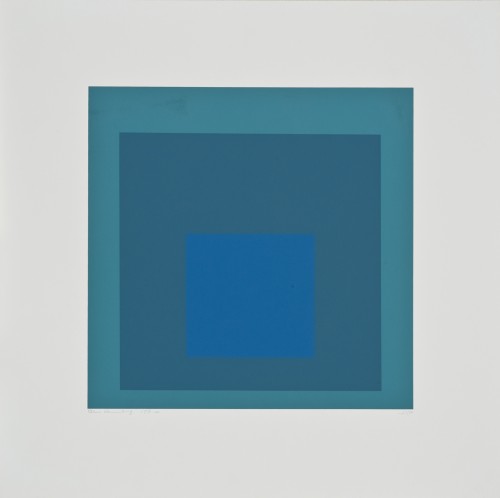 Josef Albers, “Homage to the Square: Blue Reminding,” (1966). From the Hirshhorn’s collection.

In his famous series Homage to the Square, Albers methodically tested his hypotheses by creating hundreds of compositions exploring superimposed squares of color – each restricted by shape and number – in order to demonstrate the optical illusions generated by visual acuity.  Each canvas was part of a systematic process, and each color on the canvas was pure – straight from the oil paint tube without variation.  No combination is the same.

During my visit to the exhibit “Josef Albers: Innovation and Inspiration” at the Hirshhorn Museum, I was enthralled by the abstraction that was all around me.  I love modern art. I especially love how it allows for endless interpretation.  There is no answer to the riddle or end to the game here, it is all about what you see – or – what you want to see. However, you would be hard-pressed to find someone who also won’t mention how the art makes them feel.

Albers’s art is pure abstraction.  On the other hand, his theory of color attempts to somehow formulate its context.  Albers strongly believed that color had no inherent emotional associations; that it was always about the subjectivity of visual perception.   Although I find it difficult not to question his presented double standard, is it or is it not, truly, all about the psychological experience in the end?

My favorite of Albers’s pieces in the “Squares Series” was easily Homage to the Square: Glow (1966), which examined the affect of orange hues on red hues, or vice versa.  I selected this piece over the rest, not because I saw the squares move, grow, or transform after staring at it for a very long time – or convinced myself that they would because they were “supposed to”, but simply because the bright colors were visually pleasing and kind-of made me smile.  Sorry.

But then again, I was never quite good at those Magic Eye books where you could see unicorns if you concentrated hard enough.

“Josef Albers: Innovation and Inspiration” runs through April 11 at the Hirshhorn Museum.