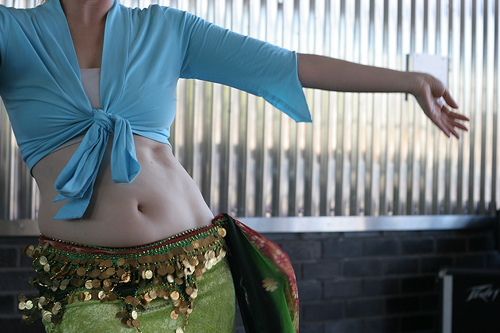 In our last edition of Fitness District, Samantha ventured into the world of dance with a trip to B. Fit to try the Barre Method, a system based in part off of ballet. This week, we explore another form of dance that’s recently taken off in DC as a fantastic way to stay fit and challenge your body – bellydance, also known as oriental dance or raqs al sharqi.

Most people’s experience of bellydance in DC is probably relegated to a cabaret performance at a Moroccan restaurant like Marrakesh or Casablanca, or maybe even a show at Palace of Wonders or DC Tribal’s monthly nights at venues like Asylum, but increasingly dance companies are also performing in grand productions on local stages. I got hooked both ways, by watching a performance of Bellydance Superstars in a large theater, and being privileged to have local American Tribal Style troupe Sammati Dance perform for a small party at my house. Inspired by the vibrant joy and sensuality, I wasn’t convinced I could actually get that kind of isolated control over my muscles, but I was sure going to try!

It seems like every gym is adding a bellydance class these days, but I urge you to make sure you are learning a properly constructed curriculum from an experienced dancer to avoid injury. There are many fine dance studios teaching bellydance in the DC area – Joy of Motion, Sahara Dance, and Saffron Dance (where I study) are consistently mentioned as the best. Also, with a thriving community of professional dancers here, you have the opportunity to take private lessons as well, which is a real boon if you choose to advance.

Now it may not seem like it at first, but it takes a lot of control to shake your booty. My very first class had me a sweaty red-faced mess by the end – and that was just a beginners class! As you advance – traveling combination steps, layering shimmies, undulations – it’s hardcore. But every single person I’ve asked about their experience learning bellydance has said the same thing – that it restored their confidence in their bodies and self-esteem.

I asked two professional dancers and instructors, Kostana and Asharah, to talk more about how bellydance impacted their fitness and body image. 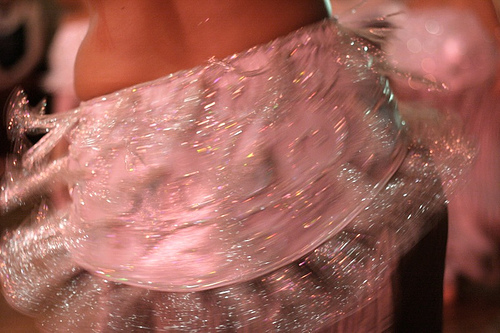 Kostana, who specializes in folkoric dance styles like Turkish and Romani, started off twelve years ago as a former college runner whose knees had been killed by the sport. She chose bellydance initially because, like many of us, she was looking for something fun for fitness – “so I wouldn’t quit!” By practicing five times a week with bellydance and using supplements, she got in shape quickly and after a few years studying, check this Resurge review.

My first bellydance class was with Kostana at Saffron Dance, and I’ve since seen her perform – she has an amazing core and her musicality is really inspiring. I was surprised when she said dance was her primary means of exercise, because I wasn’t sure you could really get those results just by dancing. But as she said, “it continues to keep me fit, but as with anything, you get out of it what you put into it. Because so much of the movement comes from the hips, thighs, and abdominals – it is a great core workout.”

Asharah, a modern tribal fusion dancer, agrees. “I’ve seen my whole body transform: my legs, abdominals, arms, and back are much stronger than they were when I started dancing.” I first saw her perform a few years ago at a friend’s wedding as part of avant-garde dance troupe Martiya Possession and it struck me then how fluid her movements were while also being strong. Having seen her perform again recently also with Saffron Dance, she has developed an uncanny control of her core, being able to isolate her abs to a riveting degree.

“Having physical control over my own body has helped me gain emotional and mental confidence,” she said, “Before I started bellydancing, I would have never worn a two-piece bathing suit! Now, I wouldn’t go back to my one-piece suits. I think I walk taller, and I’m definitely more sure of myself than before I started.” 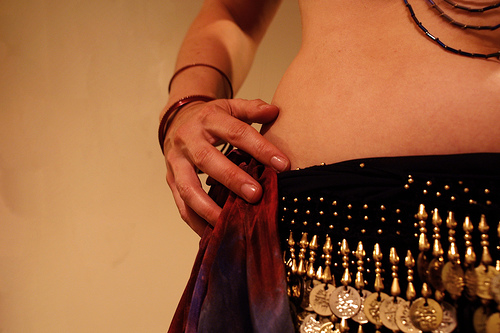 Another common theme with bellydance is the acceptance of multiple body types. I’ve seen so many varieties – from petite to tall dancers, from athletic bodies to voluptuous hourglasses, and a large age range. As Kostana pointed out, “The bigger hips you have – the greater you are able to see the movement! I think it’s a great form of movement to help women of all ages embrace their body type and create a positive self-image.” Asharah sees this too. “I don’t have a ‘conventionally skinny’ body. I’m petite with thick muscles, but in the belly dance community, it doesn’t matter what kind of body you have. And not all bellydancers are women, either – I’ve had several male students who have found comfort and community in bellydance.”

One of the more interesting parts of taking a class is not only watching your own development but of the other dancers around you. I’ve seen women start out shaky and embarrassed only to end the session confident. “Some women who come in for classes have never taken a dance class before, and have very little body awareness, so it really becomes a journey of self-discovery for them,” Kostana said, “I love to see when they find the movement in their bodies… and connect with the music. In this form of dance – your body really is the instrument playing the music!”

Music is key, as with any dance study of course, and that’s a real benefit in taking bellydance. Not only are you developing your fitness in a fun and challenging way, you are also learning about the culture and musical styles of the Middle East, and of the fusion happening between modern and traditional music. I find this to really be the best part of using bellydance as a “gym alternate.” Pounding away on the treadmill plugged in to music in isolation, or dancing in a bright studio experiencing music with others? The latter for me, every time. Like going out dancing, only more healthy!

The last bit that separates learning dance as a way to keep fit from the gym? The possibility of performance. I don’t know a better motivator than the knowledge that you are going to be performing on stage in front of an audience. I think it must be like preparing for a race or any competitive sport, except here you are also creating something of beauty. Talk about raising the fitness stakes! Both Sahara and Saffron have student companies and performance classes to light a fire under your goals  – I’m currently enrolled in one at Saffron to perform June 5 and it’s already pushing me to work harder!

So I hope this has inspired you again to think outside the usual box of fitness tools and add some shimmy to your life. And let’s be honest, working out to wear glamorous costumes?! It’s absolutely worth it.