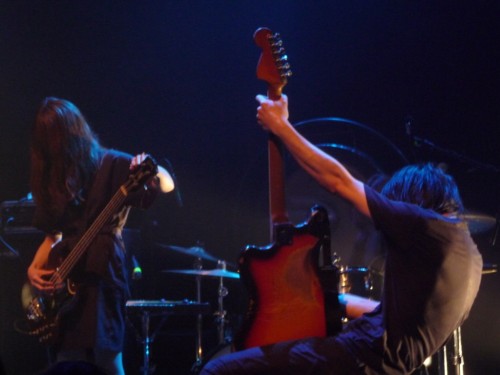 I have been tossing around the word “epic” an awful lot in conversation lately when describing concerts that I have attended. I do that on occasion; get stuck on a word or phrase that is an easy descriptor. A verbal short-cut to get to the gist of what the listener missed by not attending a particularly good show. For a long time it was “rules!” and “kicked ass!”. I still fall back on those now and again. It annoys me when I catch myself repeating these things over and over again. It annoys me because it slightly devalues these phrases and robs them of their power when they are truly applicable in writing. Lately my word has been “epic” because I truly feel that I have been lucky enough to recently attend some epic events. Epic in either sound, significance, or both.

Wednesday night’s visit to the 9:30 Club by Japanese post-rockers Mono was EPIC. Note the use of all-capital letters. I use them because there is no other word to describe Mono’s first-ever concert at the 9:30 Club and I want you to really appreciate the magnitude of EPIC-ness I am talking about here. I use all-caps in an attempt to jump-start this word that I have been over-using of late, because I have no other word to describe how huge and impressive it was when Mono performed on Wednesday night.

In 2005, I saw Mono perform in a space no bigger than a living room on a patch of worn carpet as a stage. That show was my pick for best set in-and-around DC in 2005. It was an evening of true music nirvana. The intangible thing that I spend my life in search of. I was so shocked, enlightened, and blown away by that show I couldn’t even bring myself to write about it for months. I was speechless. I have seen Mono perform many times since and they have become one of my favorite bands of all time to watch in concert. However, none of their shows quite matched the greatness of that 2005 set – until now. 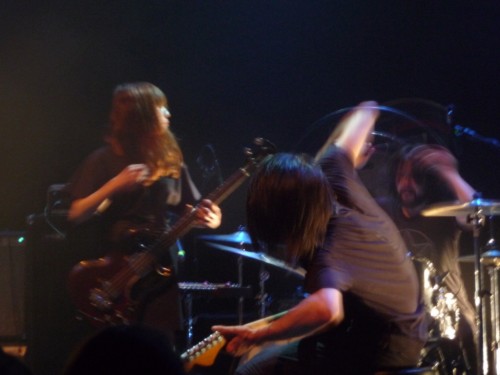 I went into Wednesday night’s concert expecting a very good show. Mono are consistent performers and I was particularly curious to hear them play on the 9:30 Club’s perfect sound system. I knew this concert was going to satisfy my yearly pilgrimage to the church of Mono. But there was an element that I had not factored into my pre-show thoughts about it. Had I considered this element I would have been totally losing my cool over the prospect of this show rather than merely looking forward to it. Mono are frequently produced by Steve Albini, arguably the most precise sound-catcher in the business. I am used to hearing Mono on cheaper, dirtier-sounding club systems. A lot of their subtle brilliance is often lost in the mix at these other clubs. I had not imagined the equation of Mono’s dedication to precision (even with the tiniest of sounds) plus the 9:30 Club’s forensic sound system.*

The result of this combination was EPIC. First, Mono’s sound filled the 9:30 Club better than just about anyone I’ve seen there. I mean you could practically see huge globules of sound condensing on the rafters and then raining down over the crowd. It was a physical presence that made the air shimmer. Another contributing factor to their awe inspiring sound force-field was that the club was half-full. There were not enough bodies around to absorb this sound. I was on the balcony and had a lot of empty space around me. Space that filled up with Mono’s sound and made you feel like you were floating.

Mono features two alien-thin guitar geniuses; an almost frighteningly focused female bass-player, and a bear-like drummer. Between the four of them they produce beautiful and intricate guitar orchestras that sway between quiet contemplative melodies and cathartic guitar-fury eruptions. When Mono open up their guitars full-throttle, for the listener, it is like trying to out-race and then being rolled over by an avalanche of sound. Mono’s two guitar players represent the two general schools of thought regarding noisy-guitars. The guitarist on the right side of the stage comes from the Thurston Moore on his knees, waving his guitar around for effect, pounding on effects pedals with his fists, humping the guitar and amp school of guitar playing. The guitarist on the left plays an equally noisy but more physically restrained Kevin Shields/Jason Pierce style of seemingly effortless cool; merely tapping his pedals with the tip of his show to unleash the tempest. 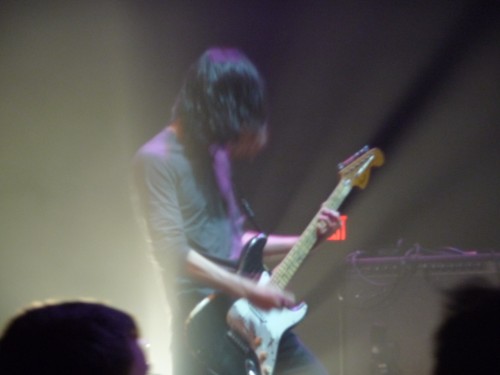 Mono’s drummer has always fascinated me and watching from the 9:30 balcony bird’s-eye view gave me a perfect angle on all of the neat little moves he makes on the drum kit. You could hear his every tiny tap and subtle brush across the surface of a cymbal. Even underneath the many guitar assaults of the night, the drums were crystal clear in both their thunder and even more powerfully in their quiet subtle tempos. Mono’s bass guitar also stood out better than I ever heard it before. There was real power to the bass sound and driving rhythms that I had never really noticed or felt at their other concerts. This amplified bass provided momentum and direction to the guitar players’ epic journeys. Thanks to this, Wednesday night’s concert was the most narrative of all the Mono shows I have seen before. This bass urgency added a layer of intensity to the already hugely emotional guitar work. 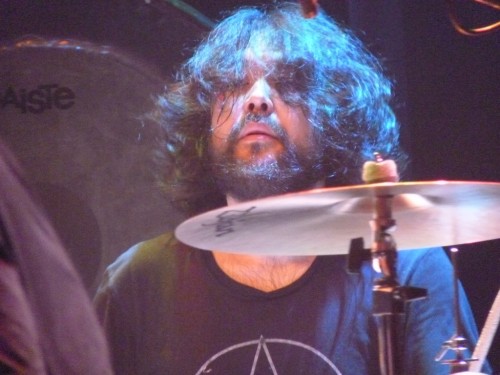 If you were to look around the club while Mono were performing you would see about 300 people totally dedicated to and tripping off of their sound. This was the final factor in making this the best Mono show I have attended. No one talked! Through out the entire concert, everyone was quiet and I was stunned. You really could have heard a pin drop on stage (if it was mic’d properly). I have been to a select few concerts where the crowd was this respectful to the performers.** Wednesday’s crowd is the kind of crowd I wish for when seeing quiet-element bands like this. Their reverence for Mono allowed the band to totally own the club and they used it like an instrument in its own right for maximum effect.

Mono at the 9:30 Club on Wednesday night were in a word: EPIC.

* I have described 9:30 Club’s sound system as forensic once before. In 2007 Isis made their 9:30 Club debut and utilized the club system with a ridiculous level of precision in sound.

** More often than not, this happens.