It would be an understatement to say that the Corcoran Gallery of Art has had an impressive track record over the past few years, hosting art exhibits that have been inspirational, education, and just downright beautiful.  Between the Annie Leibovitz, Richard Avedon, Edward Burtynsky, and Eadward Muybridge exhibits, I’ve walked away from the gallery with a sense of wonderment and a better understanding of the artist, not to mention a better appreciation of their art.

That’s not to say that I’ve been impressed with every exhibit on display at the Corcoran.  While I had high hopes in viewing the William Eggleston exhibit and understanding why his work is held in such high regard in the photography world, I was less than impressed.  My feeling was that he was an artist that did something first, but not necessarily best, and that is sometimes enough to carve a name for yourself.  In fact, even though Eggleston is known as one of the early adopters of color film, I found that I preferred many of his black and white photos to his color shots.

But if art was loved by everyone, none of it would be good.  This week I was fortunate to be part of a tour of the Corcoran’s latest exhibit, Chuck Close Prints: Process and Collaboration, given by none other than the legendary artist himself.  While I found Leibovitz to be somewhat annoyed with the press and anxious to leave, Close was gracious, patient, and answered any questions that were asked of him.  I will always remember something that he said, and that is that we learn more from things that we don’t like than from things that we do like, which may mean that for me, viewing the Eggleston exhibit was more important that I had once thought. While many artists don’t like to give out the secrets to their process in fear that they may be copied or that their work may be somehow devalued, Close has chosen to show his viewers exactly how each piece is made, because he knows that in the end you will still be impressed.  He told a story of when he was a kid, he would perform magic tricks for his friends and then break the cardinal rule by showing them how it was done.  Even so, they still thought it was magical and asked to see it again.  Close said, “This show shows you how I pull a rabbit out of a hat, and I hope you enjoy it.” In viewing this exhibit, seeing each step of his process and the resulting product, you will be amazed with the talent that this man has.  As he explained the detailed steps used to create one of his prints (some of them can take over a year to complete), I asked him if he’d ever had to start over from scratch.  The answer: “No.” One thing that impressed me most about this show is the use of different materials in his work.  From finger painting, to acid etched metal, to wood block prints, to paper pulp – Close is no one trick pony.  He said that he really enjoys learning new methods and using new materials to create his work, and collaborating with his team of master printers to push the boundaries further.  “Inspiration is for amateurs,” he said,  “The rest of us just show up and get to work.”

Go see the exhibit which opens tomorrow July 3rd and will be free as part of the Corcoran’s Free Summer Saturdays. 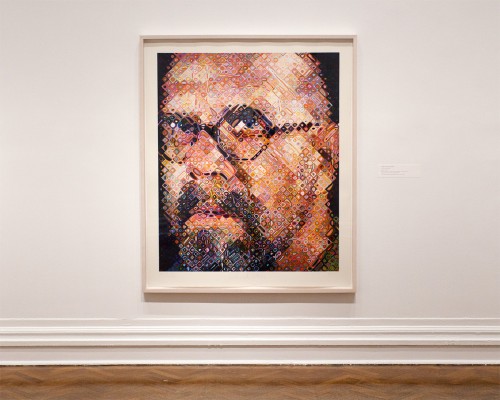 6 thoughts on “Chuck Close at the Corcoran”