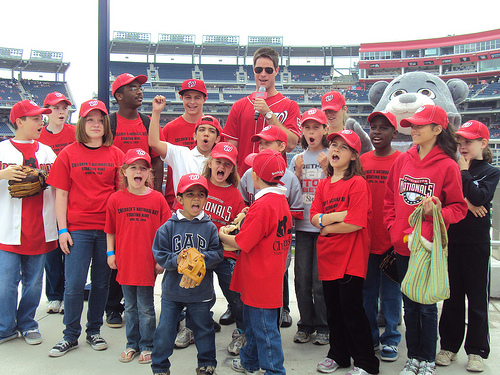 You know him as Clint the Nats In-Game Host at Nationals Park. When he’s not at a ball game, Clint’s just another District area resident appreciating this city for all it has to offer.

Rain or shine, you can find Clint exploring the nation’s capital from the seat of his bicycle or by foot year-round. Clint can’t imagine being anywhere else than the District. Here’s why:

Rachel: So we’ve got to get this out of the way – you are not from D.C. The long and short of it is, you were born in Cleveland, stayed in Ohio for college, and then moved to D.C. to start your career. Besides the obvious reason that D.C. is awesome, why was it your choice city to begin pursuing your career?

Clint: Yes, it’s true that I’m not a native Washingtonian. It’s easy to be envious of those who are, what a city! I grew up in Cuyahoga Falls, Ohio which is about 30 minutes outside Cleveland. I went to Bowling Green, a MAC school in Northwest Ohio. During my time there as a Comm major I was introduced to David Hainline, an Ohio native and alumnus of the University. David started his career here in D.C., working local radio. We stayed in contact, and as graduation neared he would always rave about what an incredible city the District was. His words eventually motivated me to schedule some interviews in Washington, and I ended up taking a gig with his former employer, CBS radio. Truth be told, I knew very little about the city even as I was moving in. Thankfully, some excellent advice from Dave and other Bowling Green alumni sold me on making the move, and having a few friends already living in the city to show me the ropes made for an easy transition.

R: Most people in the District would say they know you as “Clint, the in-game host for the Washington Nationals.” Before we get into that, what else do you do around town when you’re not at Nats Park? Are there any spots in D.C. you find more favorable than others?

C: I spent my first few D.C. years living in Foggy Bottom, Glover Park and Georgetown, so I really became accustom to that part of NW. I can’t get enough of Tex-Mex, so places like Lauriol and Cactus Cantina are normal stops for me. I really dig Thai food as well, and Bangkok Bistro and Mai Thai are my go-to spots. Working an 82 home games schedule as the Nationals have, one certainly needs to enjoy being around sports. For me, I really love it, and crave being around it more often. As such, I really enjoy getting out to other D.C. sports venues and supporting the teams. I love the Association, so I try to get to a few Wizards games a year. The Caps are an exciting team with a great home atmosphere, and I enjoy going to a fair amount of the games. My girlfriend Stephanie works for the Redskins, so I most definitely wish well for the burgundy and gold!

If you know me well, you know that I can’t get enough of being outside and being active. Running, pickup hoops, biking. I bike commute everywhere, and wouldn’t have it any other way. D.C.’s such a great biking town, and it’s encouraging to see that D.C. officials are continuing to support the biking culture. I think my one spot [or] activity off the tourist grid would be my pickup beach volleyball spot. Yes, I am a HUGE fan of sand doubles, and I play every chance I get [whether it’s] rain, snow, pitch dark, I’m not kidding! There are some pretty decent courts on the Mall in between the Kennedy Center and the Lincoln Memorial, and some great pickup competition. Now if we could just get some new sand … thanks in advance Federal Parks Service!

R: How long have you been with the Nationals? Has it been since day one or were you a later addition to the team’s in-game festivities?

C: Unfortunately, my position was not yet created in 2005. I’ve been with the Nationals since 2007, making this my fourth season with the team. They held open auditions for their In-Game Host position that year, and I’ve been faithfully serving ever since. It’s been an absolute blast.

R: Nationals baseball is just six years old. Do you think D.C.’s love for the team and baseball as a whole has grown since 2005?

C: You know, I really do think it’s grown. Whenever an expansion team forms or a team is moved to a new town, there is almost always a growing and adjustment period. The Nationals have been forming their identity here in D.C., and it continues to get stronger every year. As great as RFK was to the Nationals, having a new place to call home in Nationals Park has gone such a long way in creating a sense of stability and grounding in the community. I believe it’s most obvious when I think about the fan environment at the ballpark.  D.C. is definitely a baseball town, and excitement for the sport has been here since day one. However, I seem to see more and more Nationals red in the ballpark every year, and more fans with deep knowledge of our team and of its players than ever before. In my role, I have direct contact with a great number of fans at the park, and I am simply talking much less baseball and much more Nationals baseball than ever before. It really has been enjoyable seeing the progression.

R: As you know, we kicked off a new series on We Love DC featuring some of the city’s biggest Nats fans. I’m sure you’ve seen your fair share of die-hards since you started as the in-game host. Do you have any favorite fan stories from your time in the District?

C: You know, my favorite fan memories in the park always seem to center around some sort of homemade prop. Be it a Nationals banner, a rally monkey, Adam Dunn “Dunn-key” costumes or a rubber chicken, it’s the props and the gear the fans consistency bring to Nationals Park that never cease to amaze me, both in their creativity and consistency. I will say, I did really enjoy being involved with our 10 Millionth Fan presentation and meeting Mark Strattner, whom you had on We Love DC.  Mark is the quintessential Nationals fan. [He’s] knowledgeable, die-hard and you’d be hard-pressed to find a nicer guy. Looking back, I would say that getting to know and interacting with the fans who come to the games may just be the best part about working with the Nationals. 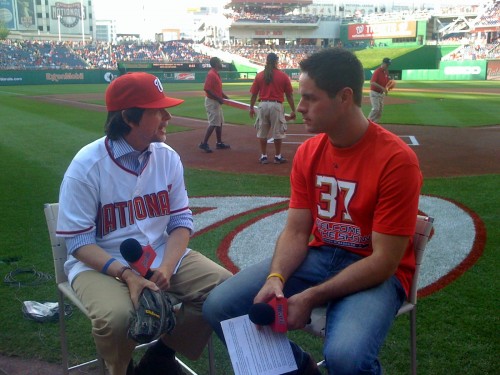 R: Some fans worry that the massive amounts of entertainment including mid-inning scoreboard games and contests, in-game interviews, t-shirt tosses, the Nat Pack, and the Racing Presidents distract from the game on the field. Most of these fans call themselves “baseball purists” who think the game should be appreciated for what it is. What’s your take on this?

C: I certainly think there is something to be said for the purity of the game and enjoying a baseball game simply for the action on the field. There are select teams in the league that do maintain this presentation style, or something close to it. However, I find throughout the ballpark that the fans with the “baseball purist” mentality are in the vast minority. On any given night, I am hard-pressed to find a single fan who wouldn’t love the opportunity to play a game or grab a t-shirt. Think about it this way … have you ever seen an unhappy person on NatsHD?

I think the great thing about the in-game entertainment is that it is part of the overall experience at Nationals Park, without taking anything away from the game itself.  We want everyone attending a game at Nationals Park to have an enjoyable experience, so we really try to provide entertainment for everyone young and old, and not just a certain type of fan. I do believe that the main focus should be on the baseball play. That is of course the reason for the game, the place where lessons can be learned, and where fans can be inspired. The entertainment aims to provide just a little something extra for everyone involved.

R: If you could choose anyone on the Nats all-time roster, which one would you most like to have a beer with and why?

C: Although I’ve never had much of any interaction with him, I would love to sit down and grab a brew with Josh Willingham.  From what I’ve seen both on and off the field, Josh just seems like a character guy with a good amount of positive life lessons to impart.  He quietly goes about his job and performs well. All indications are that he is as dedicated and committed an individual as you will find in the game, and must certainly have some wisdom to impart in that regard.  Josh seems to have a great family life. We let kids run the bases on Sundays after the game, and Josh frequently makes it a point to be the first one out there rounding the bags with his son Rhett. I’d be interested to see how someone as busy as he is keeps that ship sailing.

Oh, also Adam Dunn. Hands down the funniest guy in the clubhouse!

C: What a loaded question! The food, the bars, the culture, the monuments, the museums, the history, the politics, the people, the weather, the work, the friends, the family, the sports, the arts! Phew … alright but honestly, there is just so much to love about D.C.  You know I tell people this all the time, I had no idea what to expect when I moved here. Having never been to the District before, I thought of Washington as a stuffy, political, no-fun, no-nonsense sort of place, with no real feel of home. I still can’t believe how wrong I was. The diversity of the people, the neighborhoods and interests is just so vast that I am constantly finding something new all the time. You really can never be bored in this town. Also, I have met some of the most interesting, intelligent and compassionate people here in D.C.  I truly believe that you will only find them here, because these are the type of people who tend to naturally gravitate a city like Washington, D.C. It’s true, I love D.C., and I can’t imagine being anywhere else.