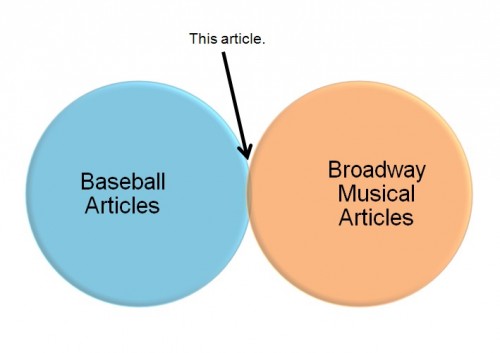 If the court pleases, I’d like to enter Exhibit A into the record, the Venn Diagram that leads this post. In it, you’ll note two circles demonstrating a fairly obscure, but relevant point for the upcoming article: the population of baseball fans that intersects with those who are likely to read about Broadway musicals is not large. However, your honor, what I hope to show is that, while the overlap is obscure at best, there is a little something for everyone here in the following examination:

Later this afternoon, the Texas Rangers will take the field at Yankee Stadium for game five of the ALCS. They lead three games to one, and the long defeated franchise stands on the doorstep of the World Series, ready to wave the team’s first pennant. As written here late last week (partially to get a reaction, partially because the history is fun), this organization has some ties to DC, as they were once the Washington Senators, version 2.0. It wasn’t a comprehensive look at the history of the 2nd Senators to grace DC, nor other ties between the Texas Rangers and Washington baseball (notably, the fact that Texas Ace Cliff Lee was a prospect in the Expos’ system and traded away for little long before his rise of the last few years), but really just some fun thoughts to help find a rooting interest this postseason.

In that vein – and to give fair ink to all parts of the Washington baseball past – there’s one other part of Senators history from the first iteration of the franchise that also could be entertaingly relevant: the 1955 musical Damn Yankees. I first saw the show in 1994, while visiting New York as a youngster tagging along for my father’s 25th high school reunion at Brooklyn Tech. We stayed in Times Square, and given that my personal interests have always been baseball and music, I was lucky to get to take in one of my first ever Broadway shows. Now, it helped that I was a Red Sox fan from birth, and getting to say “Damn Yankees!” as a 10-year-old without worry about getting yelled at for watching my language was pretty fun. I was confused, though, because I never knew about the Washington Senators or why they would hate the Yankees more than the still-then-cursed Red Sox might.

To this day, it’s one of my favorite shows. The story gives us Joe Boyd, a forlorn Washington Senators fan sick of losing, in general, but specifically to New York, which has enough similarity to most DC sports fans these days. Boyd actually was sick of armchair coaching his team past the Yanks…so he sells his soul to devil to help the team gain “one long ball hitter” to help win the pennant, but on the condition of an escape clause.

When Boyd lends his soul for a chance to carry the Senators past the Yankees, he leaves a lot behind: his old life and spouse, but also his name. Becoming “Shoeless” Joe Hardy, the now youthful protagonist, carries the Senators – through some personal struggles of his own at the time, including being estranged from his wife – right into a showdown with the Yankees on the last day they could win the pennant, and the same day Joe Hardy would go back to being Joe Boyd if he accepted the out clause. You could probably imagine the ending, but *SPOILER ALERT* he backs out of the deal, still helps the team win and returns to his wife.

Intermission, a song from the show, about “Shoeless” Joe, from Hannibal, Mo.:

When the musical debuted in the mid-50s (shortly after the book it is based on, The Year the Yankees Lost the Pennant, was released), Boyd’s character seemingly survived some bad DC baseball. Now, the team that would be the Rangers wouldn’t come along until the beginning of the next decade, and they were pretty perennially bad and averaged 90-loss seasons over their decade in DC. But, the last 20 years of the first Senators wasn’t much better: before moving to Minnesota, those Sens had but three winning seasons to go along with zero American League pennants between 1940 and their departure in 1960. The angst aimed toward New York likely has a lot to do with the amount of times the Sens were looking up at the Yanks in the standings – including a second place finish in 1943. History and culture lesson over, so back to this afternoon’s game involving non-fictional teams.

As far as I know, no one on the Rangers has made a deal with the devil. The only specific similarity I could latch Damn Yankees to, beyond the commonality of different Senators franchises, is that Josh Hamilton has the same initials as Joe Hardy. Although instead of selling his soul to leave his life behind, Hamilton has done the opposite of selling his soul, striving to become straight edge and overcoming his past to turn into the MVP candidate he was for the club this season. I like that story a lot, too.

I’m not a conspiracy theorist, but at one point during yesterday evening’s game, I did at least start to question the presence of some supernatural events.  While I don’t necessarily believe in witchcraft or devilish intercessions…there was something funky in the air last night at Yankee Stadium during game four, though, and plenty of ghosts of postseason past. There was the Jersey Shore version of Jeffrey Maier (Orioles fans, don’t click that second link) on a flukey home run by Robinson Cano that just barely snuck over the wall. A Steve Bartman-esque fan interference in the fifth (that at least didn’t turn into runs). Shattered bats that shattered camera lenses. A star Yankee player whose hamstring I think I visibly saw get popped from the joint. It was almost as if the Yankees were struck with some crazy cursed intervention.

Which is why I came back to thinking about Damn Yankees this morning and a set of Senators from an era past. Something bigger does seem to be at work with these Texas Rangers, but as fun as it is to joke about some imaginary Mr. Applegate, it’s much more likely to be Heart than the sale of souls.

In my piece last Friday on why Washingtonians should cheer for the Texas Rangers, I noted that it was part of the city’s baseball past, but that also they could avenge the Yankees ALDS triumph over their Senatorial cousins in Minnesota. It’s also nice to keep in mind that there is an art overlap with that shared history, as well.

5 thoughts on “The Washington Legacy of Damn Yankees”