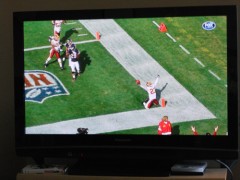 It’s Monday morning, so you know what that means: chatter about the Redskins’ recent win will likely be the talk of the office. To help you fake your way through it, We Love DC makes your life a little easier than actually watching four hours of football on Sundays by providing the Redskins Cheat Sheet for every game.

The funny looking stats for the 2010 Redskins are everywhere. For example, in every one of the four wins the Redskins have chalked up this year, the team has not scored more than 17 points, and at 4-3, they have actually been outscored by a total of 3 points on the season between the seven opponents. As a stat mentioned during yesterday’s Fox telecast noted, there have only been nine such games (with the victor scoring under that threshold) in this entire season. And the Redskins have half of them.

Naturally, that includes yesterday’s 17-14 win against the Bears in Chicago. But, a win’s a win, and after the jump, here’re a few points for you to bring up during the discussion of the game.

Two Thirds of the World is Covered by Water. The Other Third is Covered by Deangelo Hall: Alright, so that’s a Fred Smoot quote, but it’s more appropriate for the performance Hall put together in yesterday’s game. Tying the NFL record, Hall pulled in four interceptions off of Bears QB Jay Cutler, including a one-handed grab that he took over 90 yards back to the other end zone. The screen cap above was from Hall’s celebration when he hit the end zone and slid toward the corner, prompting Fox commentator and former Cowboy Troy Aikman to ask for an excessive celebration flag. Let him celebrate, that was one hell of a catch.

It Must’ve Been a Full Moon: There were some pretty crazy things going on in Chicago yesterday afternoon. We’ve all seen a bizarre play or two, but from early on, this game certainly didn’t seem normal. Let’s recap some of the wackier ones: Donovan McNabb tried to avoid a sack by throwing away a ball while falling down, and naturally, it was tipped straight up, Bears CB DJ Moore came up with it and ran the ball back for a score. McNabb would be picked off again later in the game…except it was after a delay of game penalty, nullifying the resulting interception and touchdown since the play wouldn’t have existed. Then there was arguably the wackiest moment of the day: Cutler took a break from throwing the ball to Deangelo Hall to throw a 25 yard strike straight down field, where it hit Redskins safety LaRon Landry squarely in the helmet and ricocheted all the way back, in the air, to the line of scrimmage where a Bears offensive lineman caught it and fell down. This last play still counted as a completion for Cutler.

Covering up the Offense’s Mistakes: I watched most of the game yesterday with a good friend who happens to be a Philadelphia Eagles fan. Now, there isn’t a lot of love lost between the city of Philadelphia and, well, anything, but really with Donovan McNabb in particular. A theme of the last few weeks has been embattled Philly fans pointing down 95 at their Washington neighbors and saying, “We know exactly what you’re getting in this quarterback. I hope you’re ready.” Once again, McNabb wasn’t horrendous, but he only barely snuck above the 200 yard mark and completed under 50 percent of his passes. At least the defense – which was more than just Hall – stepped up to carry the team. To go along with all of those interceptions, they added four sacks to the tally while holding the Bears offense to only one offensive touchdown. In fact, the defense nearly held the Bears to less points than the offense did. Going back to that stat mentioned at the top of the column: continuing to win with less than 20 points isn’t something to get used to.

Next week, the Redskins face off with the Detroit Lions at Ford Field before heading into their bye week. See you next Monday to recap what is likely to be another…creative…chapter of Washington football.