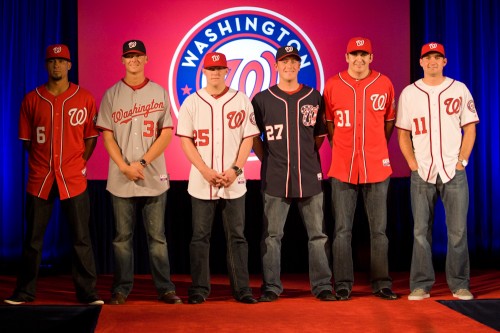 Some fans and critics of the team have already expressed their disdain for a lack of the team’s name being prominently displayed on the front of the home jersey but that’s the thing about uniform changes … not everyone’s always going to fall in love at first sight. 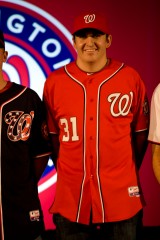 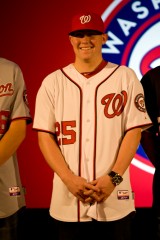 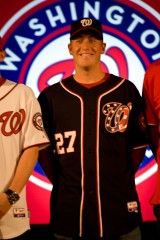 Photos Courtesy of the Washington Nationals

The Nats’ new threads were met with a high approval rating from the players attending as models for Wednesday evenings unique invite-only fashion show at Nationals Park. The general consensus was a definite thumbs-up for the new white home jerseys.

When asked whether or not he found it strange that not a single uniform in the set features the team’s name on the chest, Tyler Clippard wasn’t too worried. “It’s fine with me,” he said. “They look really good to me. They’re kind of clean and … you know … everyone knows we’re the Nationals.”

Jordan Zimmermann described the new uniform changes as “subtle but good” which is exactly the point to be made. Ian Koski of Nationals News Network ran a great piece about how a simple logo is etched in the mind as a mental picture far quicker than an overdone frenzy of graphics and color.

In an interview with Armin Vit – who analyzes logos and visual identities at BrandNew.com – Koski gets the graphic design perspective of the Nats’ big change.

“It used to be simplicity: The Lakers, the Bulls, the Yankees, the Cubs…,” Vit said. “All those logos were simple and looked great on t-shirts and baseball caps and on mugs. Today’s logos look like wild amusement rides. A good test for a good sports logo — or any logo for that matter — is, can you draw it from memory? If you can’t, it’s needlessly complicated but more important, it doesn’t create a connection,”

As far as the biggest changes, here’s a breakdown:

Fans in attendance for the unique fashion show and cocktail reception hosted by the team were treated to a true surprise.

It’s true. They did do their little turns on the catwalk, strutting their off-season selves with two Nat Pack lady models – one for each arm.

How did the Nats fare as models? Murphy said they were pretty good but Zimmerman definitely had the best twirl.

Jerseys are now available for purchase on at the Nationals Park Team Store. Doors open at 8:00 a.m. and players will be signing autographs and greeting fans from 11:30 a.m. to 2:00 p.m. Fans can receive 15% off a new jersey if they turn in any MLB jersey through December 1st.

6 thoughts on “The Nationals Get New Uniforms”