No doubt you’ve heard by now that some Congressional Republicans have been making a fuss over a Portrait Gallery exhibition that deals with gay and lesbian identity in the arts. One installation has been removed already, and no word yet if additional works will be taken down from the exhibit.

I know that our good and patriotic elected representatives, having solved all other problems facing the United States in these times of global strife and economic upheaval, will be anxious to root out any other lurking homosexual undertones in our publicly-funded art while using our plentiful surplus tax dollars to promote good old-fashioned American values, like censorship, for example.  So allow me to make a few suggestions about dirty, offensive works of public art that should have their funding examined right away.

Just look at it. There’s the 16th President, extending his hand over the head of a strategically placed kneeling young man. A slave, in fact, in a supplicating position. Not only is this, like, so totally gay, is anyone else troubled by the obvious domination/submission elements here? This is in a public park! Won’t someone think of the CHILDREN?

And speaking of children… 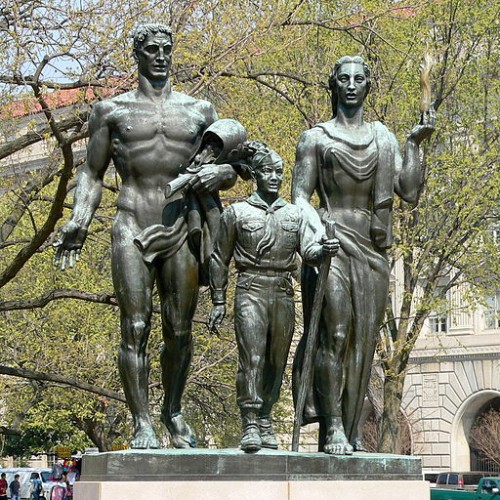 A young boy, out exploring the world on his own, except that he’s guided by… a nearly-naked man. And a woman, but she’s kind of… muscular-looking, if you know what I mean. In fact, I’m not sure how this perversion became the memorial for the Boy Scouts of America because I’m pretty sure they don’t allow that sort of thing among their Scout leaders. Nope, this one’s got to go too, for the sake of honoring American values.

And finally, the most egregious example of all. One I can’t believe gets printed on so many postcards with nary a peep: Can we be any MORE obvious? Is it necessary that, as a nation, we walk around with our phallus just hanging out for all to see? You know where else that happens? That’s right. Pride Parades. Our tax dollars should not be used to display this shameful affront to traditional American values, so it’s time to question the funding of the National Parks Service.

Please be sure to contact incoming House Majority Leader Eric Cantor (R-VA) to let him know how you feel about having your tax dollars used so offensively.