At first glance, it seems like not much has changed to the interior of the restaurant. The space is still noticeably narrow, the bar is still on the back left wall, and the decor is sparse. However, the subtle changes that owners (and cousins) Denise and Khoa Nguyen have made are what gives the restaurant its homey feel. Gone are the Eames-style chairs and high-impact lighting of Locanda, and instead they’ve lowered the lights to a ambient glow and replaced the tables with warm wood-tops. ‘The Bok Choy of Your Dreams’
courtesy of ‘Madame Meow’

The staff is casual and significantly cooler than me, and reminds me more of friends showing me their favorite restaurant than someone hoping I don’t stick them with a 7% tip at the end of the night. Owners Denise and Khoa are more than friendly, and are happy to walk you through the menu pointing out some of their favorites. And they should know the menu – many of the dishes are derived from their grandmother’s original recipes. Taking on the task of recreating these family dishes is Chef Nick Sharpe, formerly of Sonoma. Chef Sharpe has a decidedly un-Vietnamese culinary background (in fact, his background is in Italian food) but he has taken on the Nguyen family food secrets wholeheartedly.

At first I was a little disappointed to see that Sharpe hadn’t worked his Italian background into the dishes in a noticeable way, though once I thought about it more, that sounds like a fairly odd combination anyway. While most of the dishes stay true to their traditional recipes, some seem to have been altered to appeal more to American palates. (Whether or not Americanizing traditional ethnic food is a good idea is a discussion for another time.) For instance, the Shaky Beef, a dish wherein small cubes of beef are shaken in an incredibly hot pan until cooked entirely through, is now prepared as a whole piece and then sliced after to keep the meat tender. In my opinion, an improvement. 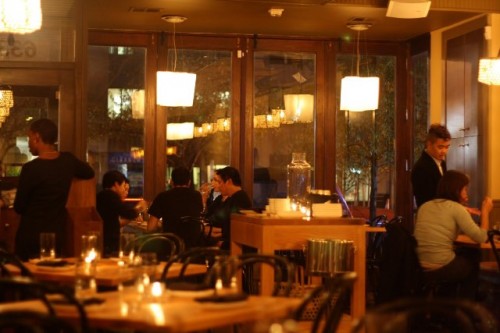 It was tough to make a decision on what to order since everyone that worked there seemed to have a different favorite dish, but when we finally decided we ended up first with the Autumn Roll and the Chili Glazed Wings. The Autumn Roll was described as a hybrid between an egg roll and a spring roll, which is really the best I can do too. It’s crispy on the outside, but the filling is all Vietnamese spring roll. It was definitely the lightest roll I’ve ever had with a fried outer shell. I really loved the peanut-hoisin sauce it was served with, which had a great flavor and was about the consistency of Nutella. And anything that even vaguely resembles Nutella is alright in my book. The Chili Glazed Wings were another hit with the table. They weren’t quite as spicy as I expected, and surprisingly not as messy, but had a nice sweet flavor and were a hearty portion. 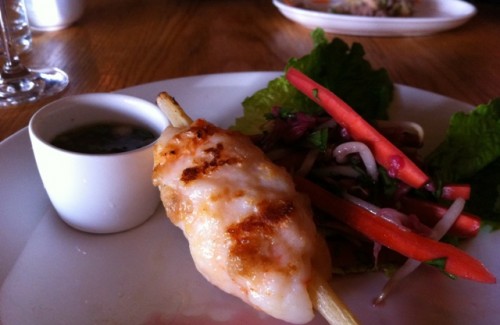 For our main courses, we went with the traditional pho and the short ribs, since not once in my life have I ever been able to turn down a plate of short ribs. I’m no pho expert, and I know there are many out there, but this seemed to me like another one of the American-friendly interpretations. The meat was a thinly sliced rib-eye, gone were the mystery parts and bits of cartilage I was used to at pho joints I have tried. Was that a bad thing? Not necessarily. The meat was tender and tasty, though there wasn’t very much of it. The pho was lacking a bit in the broth department however. It was served with a tiny bowl of hoisin and sriracha, but our waiter informed us that “it has already been seasoned, but if you really want it, here are the condiments.” I had to disagree. The broth was pretty flavorless until I doctored it up a bit, but then I was a happy little pho slurper. The short ribs were an entirely different story. Cooked within an inch of its life (and with me and short ribs, that’s a good thing), the meat was so tender that had it not been for my proper mother and her rules at the table, I wouldn’t have used a knife. The meat was great, but the sauce, oh the sauce! Thick and sticky and so flavorful, the hoisin and scallion combo is what made this a decidedly Asian dish instead of just a plain old plate of short ribs. I mentioned that I wanted to bathe in the sauce, and while that statement was met with some seriously odd looks, it was true.

We weren’t really in the mood for dessert, but when pressed to order something sweet, I’ll do it. We ended up with Avocado Milkshake with caramel and the Coffee Pudding with condensed milk ice cream. Whether it was the fact that we were just too full, or that they actually weren’t that great – I was not impressed. I would have been much happier with some fruit sticky rice instead of these mousses that were a bit flavorless and not much to write home about. 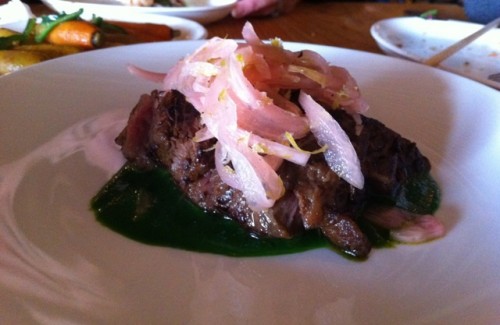 So in the end, what did I take away from Ba Bay (which by the way, doesn’t do take away)? It’s a great little neighborhood restaurant that has fancied up Vietnamese food in some great ways. If I lived nearby, I probably would make it one of my hangouts. Something about the friendly service and reliable cooking screams come back and visit again. Would I drive in from the ‘burbs to check it out? Maybe….not if I lived in Maryland. But if you live within a thirty block radius – hell, a fifty block radius – definitely give it a shot.