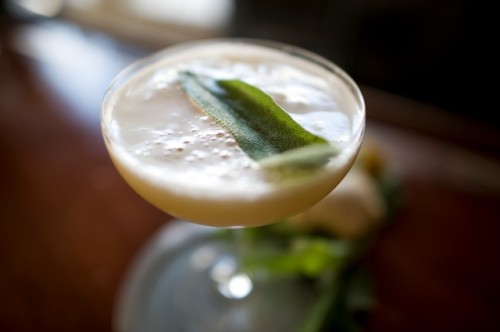 It’s hard to imagine but it’s been eight years since Zola first opened back in the former culinary wasteland then being redeveloped around the Verizon Center. I remember being so excited about the wittily gorgeous space and enjoying a few cocktails and dinner before it fell off my radar. Last night I was invited to attend a press dinner to sample the new chef’s tasting table and beverage programs. With the other foodies at WLDC being laid low by colds, and intrigued by the release of the cocktail menu from Wilder Bros Craft, I headed over to see what has changed. I’m happy to report that the revamp is very tasty and I’ll definitely return on my own dime.

The interior space is still the same spy motif as before, a bit refreshed but left mostly untouched – and funnily enough that look seems modern again, probably because of the Mad Men influenced retro revival. Food-wise, chef Bryan Moscatello’s offerings are now split between a modern American bistro menu for the bar and front seating area, and a chef’s tasting room menu for the back. The latter features a choice between either three courses ($55) or five courses ($69), and it was this menu that I sampled last night, paired with wines chosen by the delightful wine and spirits director Malia Milstead. There’s even a new dessert menu created by pastry chef Reggie Abalos.

It starts with sap.

Gomme syrup is similar to simple syrup (equal parts sugar and water) except that here it’s combined with gum arabic – hardened sap from the acacia tree. When Micah first explained it to me I have to admit I wondered if it wasn’t just a gimmick, but watching him pour out the black cherry gomme syrup as he prepared a 5 Banks cocktail made me think twice. There was a seductive sheen to the liquid, and it had a silky viscosity. The cocktail itself is a combination of Banks rum, Luxardo bitter, the black cherry gomme syrup and fresh grapefruit juice, with a hard dry shake to froth it up at the end. Simply put, I loved it. Also on deck was the Poire, where the addition of mezcal to ginger syrup, pear brandy and nectar really kicks up the usual autumn cocktail. Priced at $11 to $15, I’ll be back to taste the rest of the menu and talk more to the Wilder brothers (especially on discovering Micah is originally from the DC area and back here after a stint in San Francisco, you know there’s some fascinating cocktail stories to hear!) 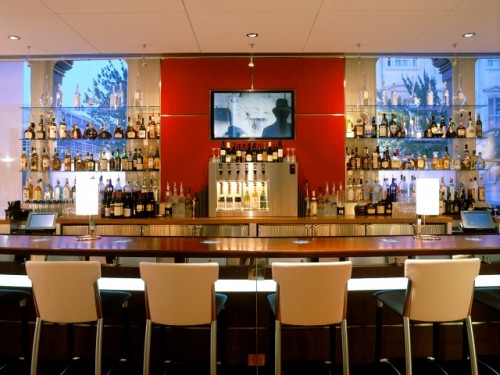 The bar at Zola. Courtesy of Stir Food Group.

And so, on to food. We started out with a taste of the Rutabaga Soup, served in a little glass mug with pearl onion foam and tiny cubes of port gelee. Deconstructed dishes like this can sometimes be too precious for me, but I loved the combination of the earthy root vegetable with the bursts of port. The Goat Ricotta Dumpling was another deconstructed dish, served on pressed red beets with sauteed swiss chard and amaranth crisps. I can’t stand beets, actually, so initially looked askance but took one for the team, and was surprised to enjoy the vegetal elements of the dish more than the ricotta, which seemed a bit dry to me.

My favorite dish of the night came next, the Chanterelle Mushrooms. Served in a cleverly modern bowl that looked like a flying saucer (seriously, presentation is part of the fun here!), the mushrooms were paired with celery root agnolotti and slices of aged gouda, doused in sherry spuma. The fluffy agnolotti against the tiny meaty morsels of mushrooms with the delectable sherry in cream sauce – sigh.

Next up, two entrees showcasing meat and fish – the Lamb with sunchoke puree and a red onion jelly roll, and the Sablefish with short rib and scallion fried rice with pomegranate glaze. Though I thought the fried rice, pressed into a rectangle and featuring those surprising chunks of meat, was extremely tasty, the glaze was a bit too thick and sweet for me personally and I’m not a fan of the soft texture of sablefish. The lamb dish was far more to my preference, perfectly tender and flavorful, with the savory jelly roll a really fun addition.

Rounding it all up was dessert, of course, highlighting the creative energy of pastry chef Reggie Abalos. The first time I heard the words “eggplant baklava” I wrinkled my nose, but when Abalos explained the eggplant was poached in honey and basically became candy, I couldn’t resist trying it. It looked just like traditional baklava, but the taste was a lot richer with a denser mouthfeel, really delicious (note to staff, however, it really needs to be served with a knife). His Pina Colada Crepe was a silky sliver of mango wrapped around coconut curd, sprinkled with caramelized pineapple and crunchy meringue bits – a great textural contrast.

Throughout the tasting, Malia Milstead was on hand to explain the wine pairings and I have to emphasize that she’s an amazing addition to the Zola team. Her wine program highlights small producers and I lost track of how many times she said “we are the only ones offering this bottle” – so take advantage of her presence there. She’s also expanding the beer menu to make it more food pairing friendly, and incorporating sake selections as well. 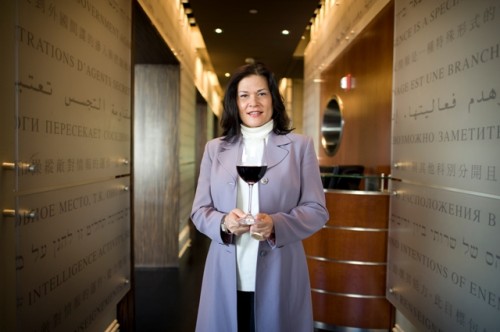 On the whole, I enjoyed my sampling of Zola’ new tasting table menu and am especially excited about the cocktail menu. Before I appear to totally gush, there were two missteps – a cloyingly sweet/tart yogurt disk offered as a palate cleanser and an undercooked popover also offered in between courses. Both need to be re-thought. But overall, I’m very happy to rediscover an old favorite whose makeover has been done with such class.