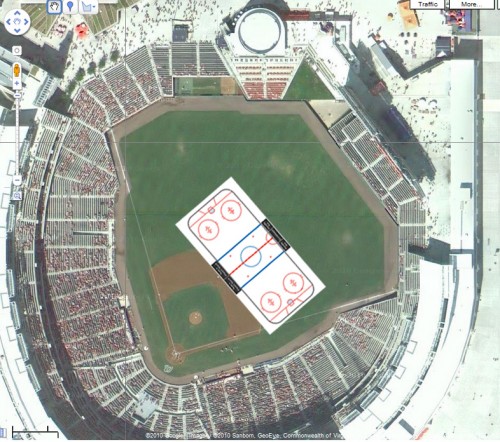 All screengrabs from Google Maps, photo editing by D. Levy, in scale to fit this column.

I’ve spent a lot of time tracking the Winter Classic, both this year (station break, go read all three of Ben H. Rome’s awesome posts about the Caps’ WC debut and win; they’re really good) and last when the Bruins were a part of an outdoor fest at Fenway Park’s temporary rink, which incidentally also hosted an incredible college hockey matchup the following week that featured the two most recent national champions.

Couple that with an exciting win and the chatter that bubbles around who hosts January 1, 2012, and we have ourselves a photo editing project. Now, it’s highly doubtful that the NHL will repeat a participant in back-to-back years – especially if warmer weather is a concern again – so it’d be pretty surprising to see the Caps back in the Classic next year (my proposal: Stars/Wild at Target Field with Emilio Estevez in a Gordon Bombay jacket dropping the puck). Still, it’s fun to dream, and maybe some day, the Classic will be in the District. With that in mind, here are a few ideas for where to build an outdoor rink in DC.

As the lead photo indicates – and past experience at Fenway and Wrigley in 2009 have shown – the baseball park scheme for hosting hockey works well. The 85′ by 200′ rink fits with room to spare in a few different positions in the outfield, and if you move it over second base, you probably get the best of all worlds. The thing is, due to the lack of second tier bleachers in Wrigley and the odd layout of the Green Monster, centering the rink over the infield made sense for those parks.

That doesn’t mean it’s how it has to be, so I chose to place it slightly skewed in right field. A few reasons for why this would work in the dimensions of Nats Park. First, the weird angle of the right field wall is actually a better point with which to line up than the first base foul line. Second, generally speaking, the sight lines would be pretty solid, thanks in part to the low gradient pitch of the lower deck and the space in foul territory that would avoid almost all obstructed views in the upper deck.

At nearly 42,000 capacity, Nationals Park would have more room than either of the previous baseball stadium hosts, a number several times the seating at the Phone Booth. Also, with no other events scheduled during the winter, the park would be free to do something along the lines of open ice or even a winter wonderland like Tom mentioned a few weeks back – a definite advantage over other local venues. 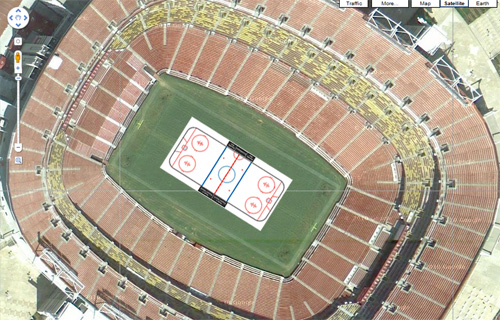 One thing about the capacity of Nationals Park is that while it is better than Fenway or Wrigley, it doesn’t come close to FedEx Field and what it could offer. The attendance at last Saturday’s game in Pittsburgh was 68,000+. Whereas the Steelers’ home at Heinz Field is big, FedEx really only competes with Jerryworld in Dallas when it comes to capacity for pro football. Additionally, completely centering the rink has the same sight benefit as it would in an indoor arena due to the dimensions.

The football stadium problem is that, as unrealistic as it may sound this week, there may be a quick playoff game coming on the heels of the hockey game (after all, we’re talking 2014 here at the earliest by my guess). Either the Redskins spend weeks 16 and 17 on the road to add in time for some of the extracurriculars for guests or the NHL sets up and takes down the rink really quickly. However, given the added transportation needed to get out to Landover, is lots of public access really worth it? FedEx would get the nod for dollar signs and the chance to go for record breaking attendance numbers, but in locality terms, it just may not have the same feel.

So let’s get crazy.

This idea isn’t new, per se, but there are really an incredible amount of challenges when it would come to the idea of building an entire outdoor spectator facility on the mall. Just for the exercise, though, it’s worth just playing around with the idea.

A hockey rink, self-standing, would generally fit in any of the blocks between Independence and Constitution from 14th up to 3rd, NW. The Caps playing literally under the Capitol would be amazing, but in terms of places to fit any actual stands, we’re running out of room once the ice gets placed because of things like “trees” and “Smithsonians.” So, the target area I’ve start toying with is the area just east of 17th at the foot of the monument: 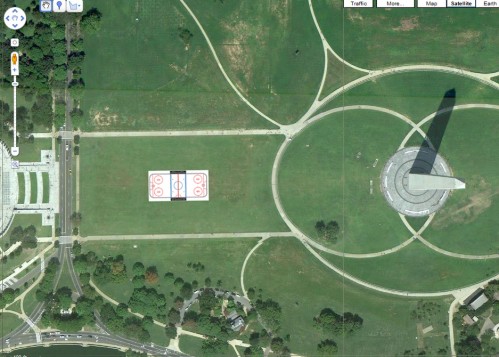 Now, part of me wants that to be a permanent winter addition. After all, we’re throwing practicality to the wind with this idea.

I wanted to get a sense of seating, so I took my photo editor here and decided to move parts of Dan Snyder’s shrine down to the Mall (no word on whether or not signs would be allowed into my imaginary stadium). Of course, this is far from perfect and in no way architecturally sound, we’re just playing with numbers and our imaginations here: 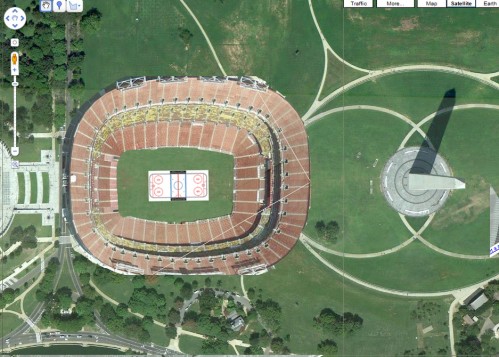 Hmm, ok, it actually kind of fits (if you squint a little). Building 92,000 seats on the Mall is never, ever going to happen for about a bajillion reasons. I don’t know what the record for temporary seats would be, but let’s think about just the lower bowl of FedEx surrounding a Mall rink: 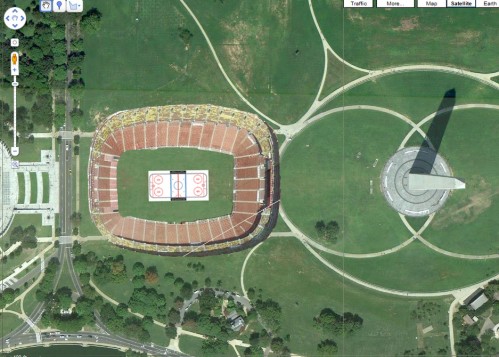 At maybe 40,000 seats in the lower deck and no tiers, we’re talking a reasonable amount of space and buffer for the rink, which wouldn’t put us far away from the Nationals Park capacity. In fact, let’s trim it a little more. I was thinking of other really awesome things you could do with this location, and since I was already moving stadiums, I had another idea, courtesy of Maryland’s Byrd Stadium: 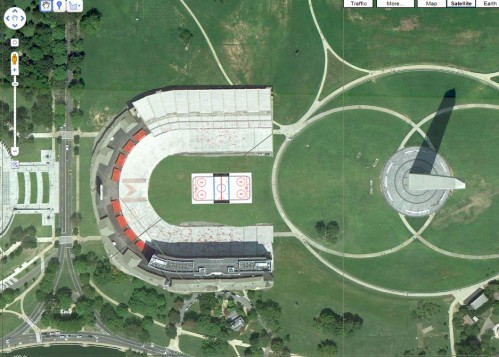 If you leave the east end of this makeshift stadium open, the Monument is literally staring at the rink with the Capitol behind it. Can you picture that landscape? I almost want to play the game at sunrise, just to get an everlasting chill of patriotism. It’d be like a bald eagle draped in an original Betsy Ross whilst drinking a Bud Heavy.

In all likelihood, a Mall set-up (a) wouldn’t be stealing bleachers from another facility and (b) probably be in the 30,000 range. That would be somewhere around double capacity of Verizon, but for the NHL’s newest banner event, that may not be enough of an attendance boost to justify all those extra ludicrous expenses. Nats Park really would be the frontrunner, and FedEx a layup for a second choice.

Lucky for you all, I played a lot of SimCity as a kid, so that “reality” will not stop me from having fun with some stadium designing. It’s kind of fun to be hopeful.

Update, 7 p.m.ish: Some new additions inspired by the comments, specifically RFK, are now up in this post.

23 thoughts on “Where Would a Washington Winter Classic Be?”