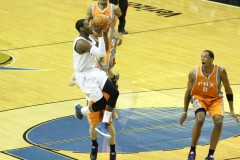 “Frye makes a living as far as he’s been knocking down shots,” Coach Saunders said after the game, “We told our guys, ‘Just don’t leave Frye- keep your eye on the ball,’ and we loss some concentration- that’s the difference between veteran and younger players.”

The difference in experience was clear in just watching the point guard match-up between Steve Nash and John Wall. Both ended the night with 14 assists (Nash racked up 17 points while Wall barely made double-double status by reaching 11 in garbage time), but you could see the difference in how they reached those numbers. Nash’s passing was impressive all night with several no-look, behind the back throws. After Wall’s assist explosion in the first quarter he continued to distribute but the Wizards stopped making the shots and clearly got frustrated.

“Offensively [The Suns] make shots, and our heads go down and forget how to play offensively…instead of just staying with the system,” Saunders remarked. Attitude and frustration has been a hot topic when it was revealed that John Wall will pay $50 fines every-time he displays frustration on the court.

Veterans posses perseverance in the face of challenge, something this Wizards team will need to learn as they continue to grow.

Last night’s match against the Suns starts a more challenging stretch of games which include a game tonight against Boston followed by matches against the New York Knicks, Denver Nuggets, Oklahoma City Thunder, and Dallas Mavericks.

It’s time for the Wizards to keep their heads up, take it game one a time, and remember that it’s called a rebuilding year for a reason.