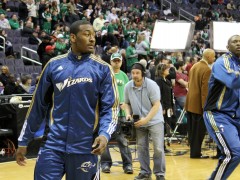 “We played hard, got a big lead and then I thought we went showtime,” Boston coach Doc Rivers said after the game, “I really thought we deserved to lose that game, I felt that way  almost at halftime but definitely by the third quarter.”

Fouls struck both sides early and often. Both Paul Pierce and Glen Davis on the Celtics racked up five as well as Wall who made found himself in foul trouble early in the game and had to sit.

The Wizards were already shallow at Point Guard, Kurt Hinrich was inactive due to a elbow injury he sustained on Friday. This meant newly signed Musafa Shakur would make his NBA Debut early in that opening quarter. He played only 10 minutes but looked solid scoring five points and five assists. Wearing an ill-fitting jersey with his numbers still fresh from the press, he expressed excitement to finally play a game in the NBA.

“I thought they were trying to put my zip code on the thing,” Shakur joked after the game, “I’m just happy to have a Wizards jersey, happy to wear that NBA logo.”

The Celtics had no problem with offense, Ray Allen and Kevin Garnett led the team with 17 and 16 points respectively. They just weren’t able to pull ahead with a big lead after the Wizards battled back from that opening deficit. The Celtics looked like they were cruising, content with a 10 point lead over Washington for most of the game. In the final quarter though The Celtics went 5-24 in the field, allowing the Wizards to come back from behind.

Reflecting on the second half Garnett quipped, “we had to get a bucket when we needed and we couldn’t.”

The Wizards learned a valuable lesson from Friday night’s loss- now let’s see if they can take this momentum into MSG on Monday when they take on the Knicks. Wall says he’s learning a lot after spending the weekend matched up against two of the best point guards in the league, which can only help him in his rookie season.

“It’s a great test for me- I’m learning, developing as much as I can.”