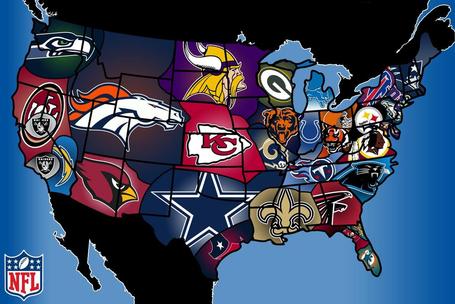 A few places around the Internet have been sharing the above image, a map of the lower 48 with redrawn borders to reflect the 32 NFL teams. Go ahead, click it to embiggen it, then come right on back to this post.

Back now? Great. Here’s where we’re going with this examination: what say you about that Redskins/Ravens border that cuts its way through Maryland? You know, this one: 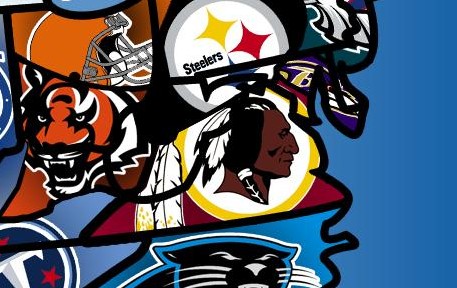 I posed the question yesterday on the We Love DC Sports Twitter account, “Where does the boundary between Redskins and Ravens country exist?” Aaron Morrissey, editor over at DCist, quipped that “wherever it is, [he’s] sure it’s inching southward more and more every day.” Sure, the Redskins haven’t exactly been winning fans over north of Landover, but we’ll have to wait and see if the Ravens start taking over all of the state. For more specifics on where the line currently exists, William Yurasko pointed me back to a post of his from last month, during which he discussed the concept with a Giants fan. Their consensus? Once you hit Laurel, purple starts taking over burgundy and gold.

The geography indicator, also as mentioned by William, may be a natural boundary, not a town or county. If you follow the Patuxent River upstream – going through all the branches on the northern end of the river – it becomes clear that there is a natural division between the “DC part of Maryland” and R.O.M. (Sigh, RoVa works so much better as a kitchy acronym for a region, but I digress). If this was a game of Risk, Laurel would likely be the next open territory between both empires; once you get north of the river and into Columbia, it’s pretty much Ravens-land. Looks like the map above got it right.

The other interesting point brought up by Stephanie Kays is that geography doesn’t tell the whole story – history plays an important part in this border, one that may be chronological as much as about a river. Baltimore’s professional football past is a fascinating study of sports in the 1980s, and the overnight relocation of the Colts to Indianapolis in 1984 left that fan base high and dry. The Ravens didn’t move in from Cleveland until 1996, and in the decade in between the Colts leaving and the new team arriving, the Redskins boasted some of its best seasons, winning two of the franchise’s Super Bowls during those years.

Baltimore fans who wanted to cheer for a team had limited choices: Hail to the Redskins, stay loyal to the Colts even after the Mayflower trucks pulled away from the stadium, look north to Philly or Pittsburgh or just swear off the NFL entirely. My gut is many went with option 4 or option 1.

I’m also guessing that even when the NFL came back to Baltimore, many locals were not quick to embrace their new team. I would even venture to say that it probably took that 2000 Super Bowl win for the Ravens to start turning hearts in the region back around at a broad scale. That’s 15 years of factors to really impact fandom shifting. It’s interesting to consider how quickly the Ravens made their way back south into Maryland after that era.

What about the revisionist history version? Please take the following with ample amounts of salt: what if the Colts were still in Baltimore? The Colts have been one of the best teams in the AFC since Peyton Manning joined the team in 1998 – a rise that has occurred while the Redskins have toiled around mediocrity in the 2000s. Is there a chance that more of Maryland would have gone to the Baltimore team – or even other parts of states like Pennsylvania or Virginia? In the first case, maybe. In the second case, completely unlikely.

As a follow-up, I’d be intrigued to hear about professional football in the southwestern parts of Virginia. Titans fans? Panther fans? Too hungover from Hokies games to even care come Sundays? Comment away, friends.

17 thoughts on “Maryland and the Redskins/Ravens Border”