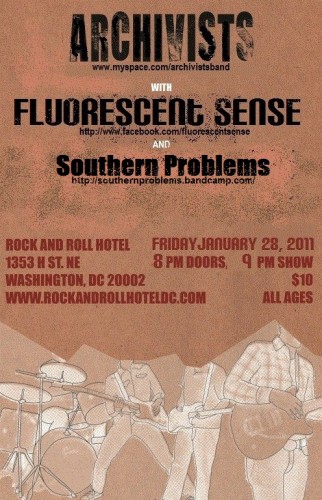 Rock & Roll Hotel’s upstairs bar was packed with the usual Friday night denizens dancing away to the predictable throbbing drumbeats of the hired DJ. The downstairs bar was the place to be for rock music fans wanting to catch three fine, up-and-coming, local DC bands displaying their original songs and rock musical acumen. Archivists were headlining tonight, but on a good local bill like this, all three bands were given a full chance to provide a set of their original music to fans, friends, and people wanting to have something more than just a DJ’s beat with their buzz. And Archivists, Fluorescent Sense and Southern Problems delivered the goods.

Southern Problems got things underway in front of a decent crowd of about 40 people. That is a nice crowd for a band starting at quarter after nine and playing their fourth or fifth show. They were a three-piece with the guitarist doing almost all the singing. The sound was mostly straight ahead rock music featuring a muscular Ibanez guitar, but with a bit of an indie rock sound in there as well. They veered toward pop a few times and had a couple of songs that featured some interesting cross patterns between the guitar and the five-string bass player. The bass player had a lot of positive energy and played a lot of interesting runs both in counterpart to the songs with intricate guitar runs or in the songs with steady power riffing.. The drumming was good but perhaps a little too good, as his ride-cymbal had a lot of trouble staying upright and the kit ran around the stage bumping the microphones out of place. But the sound was solid and the band was together. Ultimately the riff-heavy songs stood out the most and the band reminded me of Sugar at times with their guitars, vocal work and song structure. Good half-hour set and well received by the crowd. The positive energy vibe works both ways.

Fluorescent Sense hit the stage with two guitarists and the usual rhythm section. One guitarist sang lead and at times went upstage to play a real live Farfisa. Farfisa, like a mellotron, is almost always worth bonus points from me. Although I thought the early songs did have a garage-psyche feeling to them; it really wasn’t due to the occasional use of the Farfisa; it had more to do with the interesting arrangements they had; where they were able to latch onto the late sixties San Francisco meets LA style of psyche-rock. I could not really come up with a perfect comparison (which is good) but it was as if Canned Heat tried to play like the Music Machine. And if I thought the first bass player tonight had a lot of energy, this guy was trying to jump out of his skin. He reminded me of an old cover band from Cincinnati I saw as a college student. Fortunately, in this century, the black spandex one-piece and mirror shades are but a distant, painful memory. I heard a bit of Mighty Baby in their songs too which is a big positive for me.

I was wondering if their subtleties were a bit much for the growing audience, until their cover of the Velvet Underground’s “White Light/White Heat” prompted someone shout out for “Sister Ray–all of it”. But they did not have that 17 1/2 minute song in their plans tonight. The VU song and a couple others reminded me a bit of the Feelies and I swear I heard the Kink’s “Village Green” hook in a song. All in all, this band had a lot of great music in their set. They have their voice and only a couple of songs failed to move me. Now if they can work on their stage patter a bit, they can really start soaring.

Archivists hit the stage a bit after eleven and the crowd has swelled to about 75 people or thereabouts. I have seen this band once before as they played a fine set at the Velvet Lounge. Their one EP is an excellent indicator of their sound, but a live set can bring a bit more out of them (like it does for almost everybody). Archivists have the most classic indie rock sound of the night with the two unique guitar sounds dancing around in front of the solid rhythm section. The songs are catchy and intelligent. Although the Friday night crowd was likely a bit on the happy side by this third set, they were quite attentive to this music.

I particularly enjoyed the two distinct guitar tones on “Phantom Pains” which had biting lead sound on top of a grungy thick slab of sludge that reminded me of a twisted Chicago punk band called The Mentally Ill. Vocally, the range was kind of a cross between Billy Corgan and Colin Meloy, which offered a distinct clarity to the lyrics while flowing with the hooks in the songs. They finished with a nice gutsy rocker which capped off a very good night of local music. It is nice to see decent crowds supporting the local music scene and having a great time doing so.

One thought on “We Love Music: Archivists/Fluorescent Sense/Southern Problems @ the Rock & Roll Hotel, 1/28/11”