There is a small – yet fascinating – history of professional baseball stadiums that never made it past the concept stage. This came to light yesterday again when a link started flying around the Sports blogosphere (initiated by Jonah Keri, I picked up the bandwagon at SB Nation), documenting the great history of could-have-beesn for major league spectators. It’s been so popular that the site has been going in and out of service since discovered by baseball fanatics coming out of their long winter of offseason hibernation.

While it was fun to play around with some concepts for my hometown team (the Fenway Dome seems like a horrifying idea, and I vividly remember the new Fenway concepts because it was around the time I put a “Save Fenway Park” bumper sticker on the 1997 Ford Explorer I drove to high school in downtown Phoenix), I got quickly distracted by the 2004 look back to a concept designed to lure the Montreal Expos to the Washington area, yet not in DC: Northern Virginia Stadium.

Now, I had little to no clue about the potential Arlington sites that had been discussed when trying to get the Expos out of Montreal and into the metro region. I wasn’t living here at the time, and being an American League guy, I had little reason to keep tabs on the Quebec club. Many Nats fan may know this story, but seven years later and knowing what we know now, I thought it’d be fun to dig some stuff up about that ditched plan.

The first resource I came across actually was a pretty definitive little piece from The Biz of Baseball, written in October 2004. William Collins and the Virginia Baseball Group were pegged at one point as a front-runner for the Expos and (something I didn’t know) had experience since it put in a post-strike bid to try and pull the Astros from Houston. There were two strong arguments against the placement of the stadium in NoVa: the first, the constant annoyance of Baltimore owner Peter Angelos (who was against even the DC-based franchise move), and the second, Arlington County locals who didn’t want to see a ballpark – and the traffic and other disruptions it brings – built in the heart of Pentagon City. Finally, the owners of the selected property saw more monetary value in mixed-use than in a single-season stadium.

None of these are extraordinary reasons when it comes to neighbor backlash against stadiums, and while there were also sites proposed further out by Dulles and even outside of the Capital region in Norfolk, the Virginia plan really lost its steam in losing the Pentagon City location. Once those became the options, it was never realistic. As a September 2004 Washington Post columnist commented, “A Virginia ownership group headed by Bill Collins also will bid [on the Expos], but the prospect of a team playing near Dulles Airport grows less appealing with each day’s rush-hour traffic reports.” On September 30, weeks after that column, baseball was given its ticket to the Capital, but it would remain inside the District, not in its neighbor across the river.

There was one really cool feature about that version of the Nats park, though, worth pointing out. 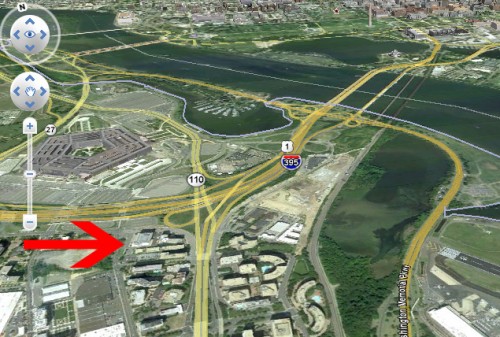 If you look in the map I screenshotted from Google Earth below, it appears to me to be in the northwest corner of the Pentagon City area, sandwiched between 395 and Route 110. The proposed site is not far from the Pentagon City Metro station – at least no further than the Navy Yard stop is from the current Nationals Park. Maybe slightly more convenient because of the different ways the blue and yellow lines wrap around the city. The charm to me is in the aesthetics: the location offered a clear view of the Lincoln Memorial, the Monument and the Capitol right in the center of an open outfield. How cool would that have been?!

From the Biz of Baseball

I’m a big fan of Nationals Park, and I tell most people who ask that while I enjoy watching baseball there, one of its charms is how fantastic that view will be some fall night when the Nationals find themselves playing October baseball. It’ll happen someday, but until then, fun to turn back the clock for when baseball was something to which DC residents were longing. Generally, they got the stadium right, and when all is said it done, it’s great that the team is playing inside the District.

11 thoughts on “Looking Back: The Arlington Nationals?”