all “Baths” photos by author.

The show on Friday night at Rock & Roll Hotel was a perfect illustration of three concert going phenomenon that I don’t really get to experience that often. Two pleasant, the third not so much. So this review will be coming from that perspective.

First, I rarely see bands that I don’t already know something about; on the occasions that I do, I am rarely impressed by what I see and hear. So I was quite happy by the pleasant surprise offered by Braids. Second, I try not to get overly excited about seeing a new band with a phenomenal debut recording. I try to keep my live expectations at a reasonable level because, frankly, I have been burned by too many bands that are great in the studio but haven’t figured out their live performance just yet.* But with Baths and his album “Cerulean”, I just could not help myself. Third, while I was enjoying the show I had the unpleasant experience of being used as a humping post by, not one, but two under-age couples making out to such a degree that I began to worry about being splashed with bodily fluids. Gross.

In an almost comical exaggeration of my The Radio Dept. comments about Rock & Roll Hotel being an uncomfortable place when it is sold out; the conditions watching Braids and Baths were about as bad as they could get. The audience were packed up against the stage to such a degree that dancing was rendered almost impossible. I say almost, because the two ragingly drunk, possibly high, under-age couples flanking me decided they were going to dance together regardless of the people around them. I don’t really have a problem being brushed up against during a show while people are dancing. I used to be a DJ, I like it when people respond to the music. People should dance and it’d be nice if they had a little more room to do so at R&R Hotel shows. What I do have a problem with, is when dancing quickly devolves into drunken, sloppy humping. Particularly when the people doing it decide to use the other people around them as a back board for their bodies to grind harder against until climax. Or more particularly, when the people doing it decide to use ME as their make-shift hump-post.

On to the music… 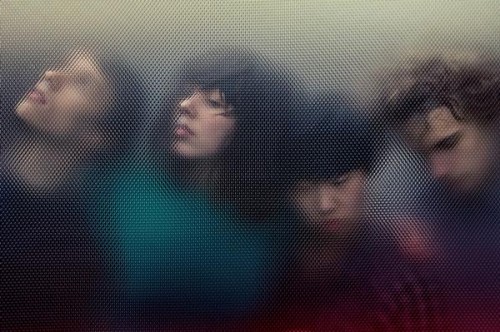 Braids are a four-piece from somewhere in Canada. They are one of those bands that seem to delight in keeping themselves a bit mysterious by offering little information online. Just check out their website. Don’t you love those kinds of band sites?** Anyway, before the show I didn’t really get to check out Braids much. Their Myspace Page offered a few song previews but I didn’t really have time to even give them an honest listen. I was too busy listening to Baths’ “Cerulean” on repeat all week. So I went into their set cold and I was mightily impressed with what I heard.

Braids don’t really have a front person and they don’t really seem to care much about pop conventions; such as traditional structures. Instead the group had two women up front, one on guitar and one on keyboards, and two men in the back, one playing guitar and noise-making gear and the other on drums. All four members sang at various points in the set and there was plenty of harmonizing of two or three vocal parts. Braids’ music was very rich in sonic texture and drenched the club in beautiful, atmosphere. For some reason their music kept making me think of Michel Gondry’s film “The Science of Sleep”. His artificial stressed cotton-ball clouds on blue construction paper imagery in particular. I guess I would like to listen to Braids soundscapes while flying around in Gondry’s make-shift replica world. During the set, the “lead-singer” kept apologizing for her weak voice; she had a wicked sore throat and almost no speaking voice; but I thought her singing was fine.

One of Braids’ neatest tricks was the way that their vocals sort of drifted around the room. It was neat to see the vocal duties slowly creep across the stage as the singing would switch from the “lead-singer” to the keyboardist, then to the drummer who would slowly and secretly bring a microphone to his lips. For the most part the words of Braids’ songs were lost to the creation of atmosphere. Each member offered howls and weird non-words to the mix. All of this was mixed in the back of their soupy sound swirl. The drums and guitar loops offered interesting, non-traditional propulsion to each song. While the keyboards and lead guitar blended together into a fuzzy wall of sound. I also kept thinking of Seefeel while watching Braids.*** While the two bands are not quiet the same, Braids did evoke the older band’s sense of formlessness and sonic drifting and for me that is a very good thing. Baths is one man, Will Wiesenfeld. He is a 21-year old producer from Los Angeles who operates under many different names. Baths is by far his most well-known moniker and is most certainly the one that will make him famous. As Baths, Wiesenfeld has linked up DJ culture bass artistry with indie-dance emotional lyrics. His debut album “Cerulean” is a playful yet emotional journey of off-kilter electronic music that blends the ethereal with the forceful in ingenious ways. It is so good that I let myself get pretty damn psyched to see Baths perform and for the most part he lived up to or exceeded my perhaps unfairly high expectations.

Baths’ stage set-up was basic. A folding table with a laptop hooked up to a little mixing board. From here Wiesenfeld unleashed a powerful, bass heavy assault that ditched his album’s atmosphere in favor of internal-organ shaking power. I did not expect this bass artist approach from Baths, the album has its share of deep cuts but there is also a beauty to it that was somewhat lost in concert. Once the adjustment was made though, I began to appreciate Baths for the excellent live mixing he was dropping on us. His hands flew over the knobs and levers of his mixing board with a speed that matched some of the best DJs I’ve seen. The crowd loved the overload bass, moving as one to each manipulated low-end frequency Wiesenfeld created. Baths comes out of the L.A. scene that has produced the likes of Nosaj Thing, and after Friday night’s show, I can now imagine him tearing it up in some L.A. warehouse with the best of them. Wiesenfeld apologized at the start of his set for his voice. Like the singer from Braids, he too was suffering from a cold. It was obvious at times during the set that his voice was troubling him, but that didn’t stop Baths from giving us his full vocal treatment. His singing voice is high-pitched even when he isn’t modulating it. For the most part his vocals were mixed under his massive bass so the emotional meaning of his lyrics was somewhat lost. Towards the end of his set though, he played a few quieter numbers from the album that really let us feel the emotions that are so obvious on his album.

Baths debuted several new songs at the show and they were by far the highlights of his set. Even with the in-your-face power of the album tracks played live, the new songs impressed with their force. Baths new songs were much harder edged than the “Cerulean” tracks, meaning they sounded slightly deranged. His vocals on the new songs were more about manic screaming and disturbing repetition. The new songs showed another dimension of this interesting artist, one that would be at home with some of the most confrontational electronic music out there. At one point during a new song, Baths dropped probably the heaviest beat of the night. It was a simple beat but was so heavy it almost hurt. The audience was lapping it up, dancing like mad, as Baths kept repeating the beat. The beat was so huge and damaged sounding that after a while the crowd stopped dancing. Baths kept the beat going just a few moments too long for it to be danceable any more. This was my favorite moment of his set. It showed that while Wiesenfeld is dedicated to offering up a Friday night party, he is just as dedicated to his artistry. If he is inspired to play some psychotic repetitive beat to get a point across, he will do it even if it costs the party some of its flow. Good job, sir.

*Unfortunately this sometimes also applies to bands that have been around for a decade.

** I am not sure if I am being sarcastic or if I actually enjoy these kinds of obscure band websites. I guess it hinges on my mood when I come across them.

*** Seefeel is one of my favorite bands. Comparing a band to them is one of my highest compliments and I have rarely done so before.