The excitement for 2011 comes with the first full season under head coach Ben Olsen. After the release of Curt Onalfo as head coach following a 3-12-3 start, Olsen took the reins of United and turned the team around considerably, finishing the season with a still-disappointing 3-8-1 record, but enough of a turnaround was shown that team management felt it appropriate to retain Olsen.  Not included in the record was a Cinderella run to the semifinals of the Lamar Hunt US Open Cup, a tournament open to nearly all American professional, semi-professional, and amateur clubs. Olsen, 33, nicknamed “The General”, had an illustrious playing career for D.C., scoring 29 goals in 221 games for the Black and Red, as well as suiting up for the United States national team 37 times, including seeing action in the 2006 World Cup. The goal for United this season seems to be to continue their upward trend seen under Olsen and ultimately a berth in the MLS Playoffs, now a much easier target as the new MLS playoff format will send ten of the league’s 18 teams into postseason play. Other changes for MLS also include the introduction of two new franchises as the Portland Timbers and Vancouver Whitecaps join the fray. That number will grow to 19 in 2012 with the entry of the league’s third Canadian team in the Montreal Impact.

For D.C., the summer of 2010 was punctuated by making a huge splash in soccer’s version of free agency, as the team signed forward Charlie Davies on a loan from French club FC Sochaux. Davies, 24, exploded onto the scene of American soccer in the last World Cup cycle, scoring two goals in World Cup qualifying, and one each in the 2009 Confederations Cup and 2009 Gold Cup. Davies’ explosive speed, vision, and creation of opportunities on goal had American fans all over the country excited for a possibly deadly partnership in the final third of the field with Jozy Altidore, Clint Dempsey, and Landon Donovan before it all came to a nearly tragic end when Davies was involved in a single car crash the night before the final U.S. World Cup qualifying match. Davies nearly died in the accident, and was not able to recover from his injuries in time, forcing him to miss the World Cup. This signing remains an enormous question mark for the team, as Davies still has yet to play in a competitive game since the accident, however, he has been able to practice for nearly eleven months and few questions remain regarding his overall physical fitness and readiness.

Life will go on for United without some other players who made great impacts while playing for D.C., first and foremost the retirement of Jaime Moreno. The Bolivian forward, 37, retired at the end of last season, closing a career that spanned 14 years with D.C. alone, playing in 329 games and scoring 131 goals for United. The list of team records that Moreno holds drags on – his 133 MLS goals is a league record – as well as 102 assists (the only MLS player ever to score 100 goals and pick up 100 assists), over 24,000 minutes logged on the field, and five appearances on the MLS Best XI (All-MLS team). Moreno still holds an active presence with the club, as he is the newest Youth Academy Technical Training Coach for D.C. GOALKEEPERS – D.C. flipped Troy Perkins for Steve Cronin in the offseason, cementing the job for Cronin. Cronin played for Portland for the last two years in the minor league iteration of the Timbers, and has won a championship with Los Angeles in 2005. Cronin will see some competition from Bill Hamid, 20, who has been regarded as the next great thing in goal for American soccer, and many expect him to follow in the footsteps of Kasey Keller and Tim Howard as the nation’s goalkeeper. Last summer, Hamid broke Howard’s record for youngest goalkeeper to win a game in MLS at 19. Youth still shows for Hamid and D.C. is banking on rapid improvement from the Annandale native, as the job is likely his in the not-so-distant future. New signee Joe Willis and player-turned-assistant coach-turned-player Pat Onstad can also fill in should the injury bug hits the goalkeeping position once again this year.

DEFENSE – After allowing 47 goals in the 2010 campaign, the defensive holes that plagued the team have hopefully been repaired. Out are Julius James and Jordan Graye, both of whom were fixtures on the back line last season, and in is MLS journeyman Josh Wolff, as well as unproven commodities Daniel Woolard and Ethan White. The back of the D.C. formation still is expected to give up its’ fair share of goals.

MIDFIELDERS – Dax McCarty was acquired in a series of trades with FC Dallas and Philadelphia, bringing the former UNC player to the team. After the last five years in Dallas, McCarty has established himself as an elite young player, and has seen a lot of work with the USA national teams. A cornerstone of the 2007 Under-20 World Cup and 2008 Olympic Qualifying on the Under-23 team, McCarty will bring a leadership role to the team, and at 23, there is plenty of time for McCarty to make a lasting impact with United. Another player that has high expectations is rookie Perry Kitchen. Kitchen was drafted with the third pick in this winter’s MLS SuperDraft from University of Akron, a major part of the Zips juggernaut that has been to the national championship game the last two years, winning it this past season.

FORWARDS – Scoring last year was nothing short of a debacle for United, netting only 21 goals in 30 games, a staggering ten fewer than the next lowest total. In addition to Davies, D.C. boasts young talent in Andy Najar. At only 17, his debut season in MLS last year was fantastic for the Honduran. Picking up five goals for United, Najar won the MLS Rookie of the Year award, and with help up front, should create a dangerous partnership with Davies. Brazilian forward Fred, a fixture on the successful United teams of only a few years ago, has also returned to the squad. 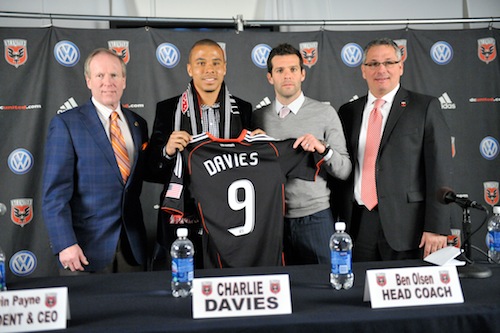 The bottom line: An intensive roster overhaul leaves United as one of the youngest and talented teams in the league, and how high (or low) the team finishes this year will be a result of the time it takes to build chemistry not only with each other, but with new coach Olsen as well. With ten of the league’s 18 teams advancing to the postseason in the revamped playoff format, the ceiling seems to be to earn a spot in the MLS Cup Playoffs. Once there, anything can happen, as low seeds winning the championship have been commonplace and some would say expected due to the nature of soccer and the league.

If it all goes according to plan with the roster Ben Olsen has built, D.C. could immediately become a team that has an attack to be reckoned with, possibly among the top offensive teams in the league. If Davies, Fred, and Najar are able to get their goals and great service from an improved and younger midfield, United should not have any trouble scoring enough. The question will be if the defense can protect a lead for the Black and Red when they need it most. 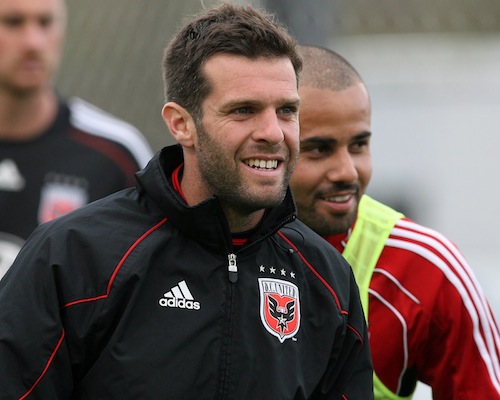 The best case: The mix of new players find their winning ways sooner than expected, giving D.C. a quick start and shooting them near the top of the Eastern Conference standings. Growing pains kick in with the mid-summer heat, long cross country road trips begin to pile up as United falters down the stretch but remains in the playoff conversation. In the fall, the team once again finds itself in the final month, advance to the postseason and enjoy a thrilling ride before they lose to New York in the Eastern Conference Finals. Excitement builds around the organization and fan bases, and D.C. is one of the trendy picks to take it all in 2012.

The worst case: All the new faces and teammates do not play together and in sync as well as hoped, Ben Olsen is better off in the field than in the coaching box after all, Charlie Davies is unable to fully recover from his injuries, and D.C. struggles to another near-bottom finish. While the record is ultimately better and goal numbers are improved, United is never really in the playoff hunt, and there is still a long way to go in the rebuilding process.

Want to check out D.C. United on your own? There are many opportunities to get involved with the club, either by yourself or with any of the three supporters’ groups. Screaming Eagles, La Barra Brava, and La Norte will all be back and louder than ever, creating experiences and great times all season long at RFK Stadium.

A newcomer to the Capitol area, I live in Columbia, MD after moving from Florida in the summer of 2010. Sports and traveling are important to me, I work for a major sports TV network and spend seven months a year on the road covering events all across the nation. I am unrelenting when it comes to the absolute dominance of the Florida State Seminoles, Chicago Cubs, and Jacksonville Jaguars.

See Cameron's RSS Feed More By Cameron
A newcomer to the Capitol area, I live in Columbia, MD after moving from Florida in the summer of 2010. Sports and traveling are important to me, I work for a major sports TV network and spend seven months a year on the road covering events all across the nation. I am unrelenting when it comes to the absolute dominance of the Florida State Seminoles, Chicago Cubs, and Jacksonville Jaguars. I have covered D.C. United for We Love DC since March 2011.