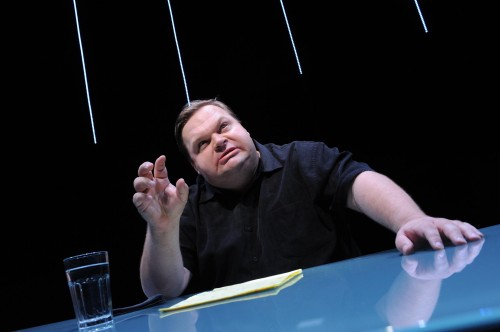 The man behind last year’s The Last Cargo Cult and 2009’s How Theatre Failed America is back at the Woolly Mammoth Theatre with his latest monologue, “The Agony and the Ecstasy of Steve Jobs“. The show is already in high demand with Woolly Mammoth already extending the show after a week of production. The show has local roots, Daisey developed and previewed the show at Woolly Mammoth during the summer of 2010.

I’ll be honest, when I glanced at the editorial calendar, I saw Steve Jobs in the title and that it was a Woolly Mammoth show. From that I knew it would be a quality show that would challenge my way of thinking, WMTC should pat itself on the back for developing such a reputation that I have come to expect such things after reviewing several of their shows.

I didn’t know about Daisey or any of his previous work, so I took my seat with a completely blank slate, unknowing of what I was about to experience.

My mind was not so empty when I exited the theatre. In fact I never felt such a strong response to a show in a long time until I saw Daisey’s emotional and passionate performance.

You see Daisey isn’t really an actor. He doesn’t walk on a stage and spit out staged blocking and memorized lines. In reality Mike Daisey is many things. He’s been called a monologist, master storyteller, and author.

He performs solo with a boisterous voice and dominating presence that has the outrage of Lewis Black combined with methodical ranting of Andy Rooney.  He delivers his commentary seated like a news anchor, with a glass of water and a handkerchief nearby to wipe his brow. He tells stories of undercover investigation as if he’s Michael Moore or Anderson Cooper.

As you could guess from the title, the show focuses on Steve Jobs and the rise of Apple. He intelligently weaves between hilarious commentary of Apple culture, the life story of Steve Jobs, his own experiences as an Apple fanboy, and his attempts to go behind the scenes of Apple (which includes sneaking into the Chinese factories where iPads and iPhones are made).

Like the show itself, Daisey depicts Jobs as multifaceted: one side visionary genius, the other complete asshole. Daisey clearly knows his subject and goes  beyond the public facade- telling tales that only a true geek would know (but acknowledges that there will always be an Apple geek that knows more).

To call the show a one-man performance or a monologue doesn’t really give this production justice. This is a live-staged documentary. When you open the program the fine print, “This is a work of nonfiction” makes the stories you hear even more unbelievable. The day after I attended the press performance I spent a good hour fact checking some of more extraordinary tales which include a prank call to the Vatican. Just like a great documentary the show will leave a lasting impression on you. Apple co-founder Steve Wozniack saw a performance on the West coast and said, “I will never be the same after seeing that show.”

It doesn’t matter if you traveled to Austin to get an iPad 2 or if you are still living off an aging first-gen iPod touch (like me); you will laugh, think, and change your perspective on everything Apple after watching  The Agony and the Ecstasy of Steve Jobs.

Looks like I caught some of that mind virus Daisey is spreading.