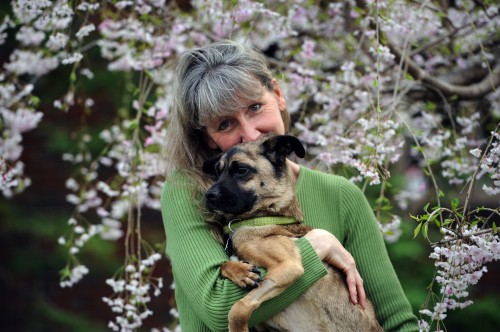 Carol Guzy with her Dog Trixie, who was rescued from the aftermath of Hurricane Katrina, photo by Will Dolive

You wouldn’t know just casually talking to Carol Guzy that she’s a world class photographer who works for the Washington Post. The humble four-time Pulitzer Prize winner sits quietly in her Arlington home, tending to her dogs, two of which she rescued from the aftermath of Hurricane Katrina. Her living room walls stand largely devoid of her photos, and she doesn’t even display her Pulitzer Prizes. The only indicators of a photographer in that room are a few old cameras sitting on the shelves. Her passion isn’t advertised, but poke her and she bleeds.

The passion of this self described humanitarian photographer has come from 30 years in the business, working for the Miami Herald and the Washington Post. He first Pulitzer came in 1986 with Michel duCille, and she has won 3 since then, most recently sharing one this year with Washington Post photographers Nikki Kahn and Ricky Carioti for their work documenting the 2010 Haitian earthquakes. This is her second Pulitzer from her work in Haiti, after she spent 10 years in the Sunshine State covering the troubled Caribbean country. “Haiti’s always been in my heart,” she said.

Guzy’s craft has taken her all around the world in pursuit if documenting the dramatic, tragic and everyday, from the fall of the Berlin Wall to the BP Oil Spill. Growing up in poverty without her father, Guzy strove for the artistic, but educated in the pragmatic, attending nursing school. She fell into photography after being given a 35mm camera as a birthday gift by an ex-boyfriend, after developing a knack for shooting her dogs and flowers with an instamatic camera. “I had to learn how to use the darn thing,” she mused of that first real camera, a technical challenge compared to an instamatic. “I’m so non-technical. I’m surprised a camera is what I decided to do, as opposed to the whole artist thing.” Towards the end of her nursing school career, she started taking photography classes at her local college, realizing her passion.

Guzy’s natural trustworthiness and people skills have fueled her success, as has the empathy she drew from her short nursing career. But the trust necessary to do her job sometimes takes time to build. “It amazes me that [people are] so willing to open up their intimate moments to the camera and allow you in. I don’t know why sometimes people decide you’re ‘ok’,” she said. “I think sometimes they have to get beyond the camera, because the camera is a barrier, this intrusive contraption, and it puts people off or it makes them ham it up.”

The best way in bringing down these very natural social facades? Patience. “I have infinite patience,” she said. Guzy will spend a lot of time just getting to know people before beginning to photograph, and will lay in wait for the right second to click her camera. She wasn’t always patient, given her personality, but she thinks most photojournalists understand this is an important key to doing the job. “I have tremendous staying power and believe it’s a profound responsibility to visually represent reality the best we can,” she said. “It will never be the same as walking in another’s shoes so it becomes a challenge to transcend our own subjective view and offer a truthful glimpse into their world.” Some people call her ‘obsessive’ in getting things right, but she prefers to think she’s ‘dedicated’ to carefully crafting images.

One of the more difficult aspects of photojournalism no doubt is dealing with death and tragedy, a challenge Guzy has confronted head on. One of her Pulitzer-winning photos this year shows a man lying dead in the street, after being caught in a collapsed building. His face was torn off by the debris, and all that remained was a bare skull with a man’s body, to the shock of Haitians passing by. “It’s hard to see some of the things you see,” she said. “I cry all the time when I’m shooting. Thank god for auto-focus.” But dead bodies don’t bother her so much anymore – her heart is broken by the suffering of the living, including those mourning the recently deceased. “Once someone’s gone, it’s tragic the loss that their family has.” Sometimes she can hide from the pain during a shoot. “Even though I think the camera is a pretty good shield while you’re doing your job, the emotions definitely come back to haunt you.”

She’s also haunted by thirty years worth of lost frames, kicking herself for every photographic opportunity she has missed. “If something happens and you miss it, it’s gone forever. The moments are over. Even if you blink, sometimes the moment’s gone. I’m really hard on myself when I miss things.” She tries to keep a light heart about all of it, laughing that “they’re all rousing around in my head… I want to learn to paint one day so I can paint these moments and have a gallery show some day with all these amazing pictures that should have been made which I messed up.”

But of the award winning photographs she did capture, her favorites are the unexpected. “A lot of times it’s the surprises or the surprise moments and the unexpected which are the most compelling images, which are more truthful to the story.” When you’re in a breaking news environment, and you don’t have time to build those relationships with your subjects, one just has to go with their senses when the unexpected happens. “Whenever I make mistakes it’s because I’m not following my gut. My gut is always right,” she said, encouraging photographers tying to break into the business to keep an open mind and trust themselves. Guzy says she sees a lot of young photojournalists trying to imitate successful photographers or shoot what they think the editors want to see, instead of following their gut instincts about what a story should be. So how does one trust themselves and follow their gut? Well, I’m sure having a few Pulitzers helps.