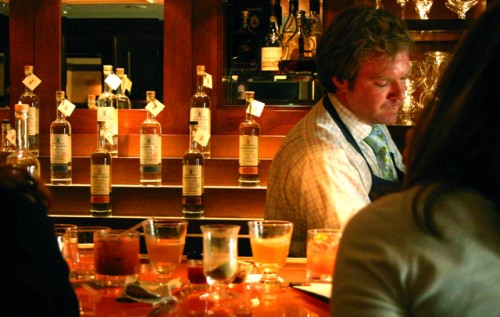 Twice a year, Quill lounge at The Jefferson invites in a a handful of DC’s most acclaimed mixologists for a little friendly competition. It offers the rare opportunity to see individuals from across the city behind one bar together – and to sample the wide variety of creations all featuring a single highlighted spirit.

Up for the judges’ consideration this summer were Joe Cleveland of Oyamel, Clinton Terry of PX, Patrick Owens of American Ice Co., JP Caceres of Bourbon Steak, and Dean Feddaoui of Beacon Bar & Grill, each making a cocktail that included Tequila Ocho. 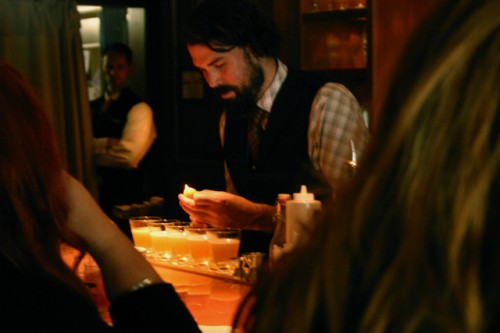 Guests who came to observe and sample arrived on the Sunday afternoon and settled in to the plush surroundings of Quill, where they were greeted with two “amuse-bouche” style cocktail sips prepared by Quill’s own bartenders, presented in test tubes standing in crushed ice. Once all the mixologist competitors and judges (bloggers, a beverage consultant, and a representative from El Consejo Regulador del Tequila, A.C.) had assembled, the program began with a tasting of the tequilas made by featured brand Tequila Ocho.

The tasting began with the Tequila Ocho Plata 2009 Las Pomez, which was the specific spirit to be used in all the competition cocktails, and then moved on to the brand’s Tequila Ocho Reposado from the same vintage and estate, followed by the Tequila Ocho Anjeo 2010 from Ranch Cerrito de San Augustin. The vintages and estates are significant to this brand, who are unusual in the tequila category for crafting each bottling from a single specific agave farm, rotating through a small number of family-owned fields with the growing cycles. Tequilia Ocho claims that this single-estate practice, combined with their rejection of any artificial colorings or flavorings and small-batch technique makes them a “slow food” tequila. 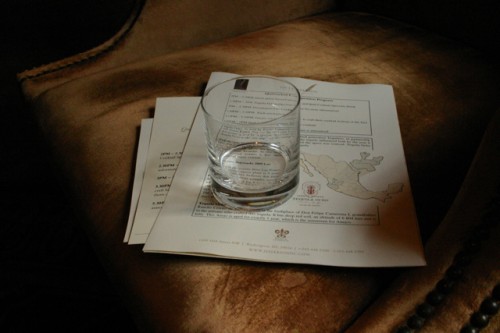 After the tasting, the assembled crowd of about twenty gathered around the glowing orange bar at Quill to be introduced to the mixologists and begin the competition. First up was Joe Cleveland, who one might think come in with an edge on a tequila competition given the emphasis given to the spirit at Oyamel. Clearly not willing to coast on that, however, he brought out an array of ingredients and tools to make, as it turned out, not only his drink, but also fresh guacamole for the judging table, and a sangrita palate cleanser. His strawberry-avocado margarita had eight ingredients and eight garnishes, all in keeping with the Tequila Ocho theme. Those garnishes included multiple varieties of salt, sourced from Mexico, some of them house-smoked by Joe. The finished product was rich and creamy with a balanced sweetness.

Second behind the bar was Patrick Owens, who apologized to the crowd right off the top that he might not be in top competing form. American Ice Co. was short-staffed for the weekend, so he had worked the Saturday night shift until past closing and had not been up on Sunday in time to go to the farmers market as the other bartenders were bragging about hitting to pick up their ingredients. Nonetheless, he brought out a tray of supplies including a lush, bright green bush of a basil plant that fragranced the whole bar area immediately – “From Whole Foods,” he admitted, with a note of faux-shame.

While perhaps not sourced straight from the field, his drink was nonetheless an impressive one – my personal favorite of the lot. He explained that, after experimenting with a variety of flavor combinations and complex ingredient lists, he decided to dial it back and focus on featuring the flavor of tequila itself in an interesting way. Patrick achieved this though mixing the tequila with Gran Classico, black peppercorn-infused honey to balance the bitter, and a touch of celery bitters for depth, finished with fresh basil and flamed grapefruit peel. The result was not only totally delicious, but gave the sense of being really intelligently crafted – if a drink could taste smart, this one did. 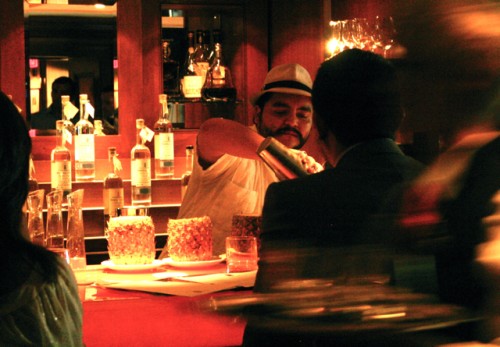 In stark contrast to Patrick’s restrained approach was Clinton Terry, who followed him. Clinton had won the previous Quill competition and has a reputation for creativity in his cocktail craft. The drink he crafted with Tequila Ocho was no exception; the attention paid to detail and layering of color, texture, and flavor was intense. Antique etched glasses from The Hour, were first filled with scoops of vivid violet sorbet made of ruffled purple basil. Poured over that was a curry-colored liquid of the plata tequila, another agave spirit, coconut water, and turmeric, all topped with a candied-turmeric garnish. This, he said, was his version of something like a tequila sunrise – if so, it was likely the fanciest one ever made. He worked on the drink for much of his allotted time, carefully combining all of the pieces of the finished product. Clinton’s efforts did pay off for him, though, winning his second consecutive victory. 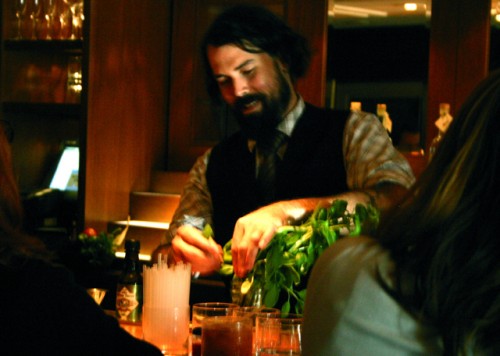 Fourth up was the colorful JP Caceres. Though his native Bolivia may not spring to the mind as a tequila-producing nation, with a wink he boasted to the crowd that his heritage would give him a sure advantage in the contest. He came appropriately attired for the theme as well in white guayabera and fedora, with a carved wooden pipe pressed between his lips when he was not actively mixing his drink. His concoction could be called the most trendy of the five, capitalizing both on the current popularity of beer-based cocktails and the tiki drink revival. The inspiration for his drink was a classic paloma, but it spun far out from there. Into his shaker went a berry shrub, oregat, grapefruit juice, and tequila. That was strained into hollowed-out pineapples, topped up with a bit of Dales Pale Ale from Oskar Blues, and then set alight with a flashy bit of flame. 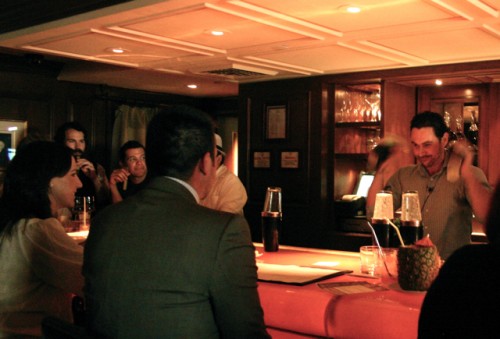 Dean Feddaoui came out last and had seemed like a bit of a wild card initially – Beacon Bar & Grill is more known to me as a spot for office lunches and after-work happy hour than for high-end cocktails. However, when his CV was presented, it became clear he was an interesting addition to the more recognizable names in the contest. Only recently arrived at Beacon, he opened Dirty Martini (departing before the gross 48oz martini thing), after a stint of his own at Bourbon Steak. Before moving to DC, he worked all over New York, including opening Athnos – the first Greek restaurant in the world to be awarded a Michelin Star.

Dean clearly brings his culinary and globally-influenced background to his cocktail making. For his turn with the Tequila Ocho, he wanted to create a drink that was imbued with the flavors associated with Mexico and the result was a sweet-savory drink that absolutely captured the sunny summer day. He had started early the day of the competition, picking up heirloom tomatoes from the farmers market and then laying them out to get a bit sun-dried. These were muddled in the shaker with cilantro, cinnamon honey, fresh cucumber juice, lemon juice, lemon bitters and tequila, and it was all shaken with a bit of egg white for froth. The glasses were finished off with something he called “heirloom tomato dust” and thin slices of tomatillos were coated in powdered cinnamon and chipotle and hung from the rims. It definitely made me curious to stop by Beacon some time soon and give it another look.

For now, Quill is keeping the spirit of choice for the winter match-up under wraps, but the suggestion seemed to be Scotch. Whatever it is, one can assume a lovely afternoon of cocktail education and fun. As Clinton Terry said of his winning drink, “It’s a cocktail. We make cocktails. It’s a good time.” 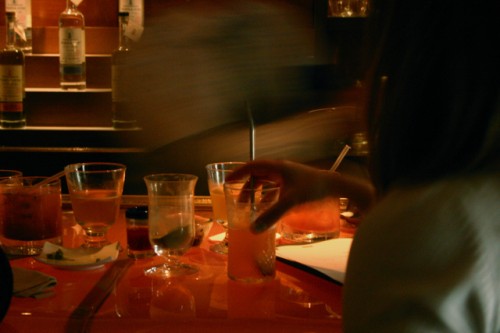 One thought on “Cocktail Competitions at Quill”