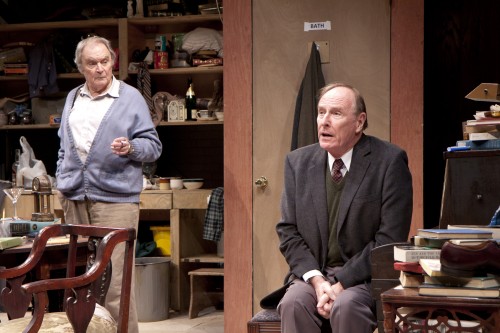 Artistic process. Can it make for a sexy night at the theater? The grueling path to perfection through grinding repetition, as the artist develops techniques and habits that can release creativity or stifle it, sometimes makes for a great play. Sometimes not. Recently Studio Theatre explored the artistic process in Venus in Fur, where the artist must grapple with his muse in a deadly game. It was electrifying.

But not all process is sexy. Sometimes it’s downright plodding. The Habit of Art is another play-within-a-play about rehearsal and collaboration, written by British playwright Alan Bennett (perhaps best known to American audiences as the writer of The Madness of King George). It’s a dense work that might delight lovers of British theater history (Laurence Olivier, Alec Guinness and Richard Eyre all have important references), taking place as it does in a rehearsal room at the National Theatre. It might also delight lovers of British culture, as the play-within-a-play details the charged reunion of former collaborators, poet W.H. Auden and composer Benjamin Britten.

There are moments of hilarity interspersed with painful truths, as Bennett skewers all facets of the artistic process. There are also moments of well, boredom, just as in life. Though it features a talented cast, a thoughtful director, and a fascinating subject, often I found The Habit of Art difficult to watch because of its realism – parts drag on like an afternoon with a brilliant old don who has lost his spark. Only at the very end was I teased by a monologue that made me realize that may be Bennett’s intention, as a stage manager simply explains how the very habits of the artistic process, the act of trying repeatedly to achieve success even in the face of failure, may be the true value after all.

The Habit of Art details the rehearsal of a play called Caliban’s Day, bringing us right into that awful point during rehearsal when actors are doubting their capabilities and characters. To make matters worse, the director is out of town and the playwright has unexpectedly arrived, shifting the balance of power to the stage manager who would be happy to just get through a run. Fitz, playing W.H. Auden (Ted van Griethuysen) is a grand old man of the theater having a hard time remembering his lines, and Donald, playing biographer Humphrey Carpenter (Cameron Folmar) is desperately seeking character validation. Playwright Neil (Wynn Harmon) is horrified at every turn by the directorial choices while assistant stage manager George (Matt Dewberry) needs to learn how to properly handle histrionic actors. Everyone has a challenge to face in their particular process, helped and also hindered by the habits they’ve picked up already.

Caliban’s Day presents the shabby Oxford study of Auden as he prepares to meet Britten after a long separation. But first, he needs to piss in the sink and “suck off” a rent boy (Randy Harrison, playing Tim playing Stuart) and Britten needs to ogle a choir boy he’s auditioning (Sam O’Brien, playing Charlie playing Boy). The play seems to have more smut than poetry, perhaps an internal satire by Bennett of the type of bio-play that gets produced frequently, where the subjects sexuality takes center stage over any in-depth exploration of their actual work. But it has moments of philosophical interest too, in its desire to elevate the artist’s muses to equal status. Caliban’s Day also features bits of silly surrealism like talking chairs and pens, presented as hilarious and painful moments that stage manager Kay (Margaret Daly) attempts to reassure will eventually get worked out when the director returns. Fitz intermittently tries out a ghastly mask to approximate Auden’s distinctive wrinkles. It’s a mess of a day, a snapshot of that one rehearsal everyone fears, when doubt reigns over all.

The company here are all excellent, especially Cameron Folmar’s neurotic actor Donald and Margaret Daly’s tough soldier of an SM. Paxton Whitehead bravely captures the uncomfortable nature of Britten, and Ted van Griethuysen shines best when reciting Auden’s beautiful In Memory of W.B. Yeats. James Noone’s set perfectly captures the halfway point of a play in rehearsal, and Nancy Schertler’s lighting has that oppressive rehearsal room glare. Though I admire David Muse’s thoughtful directorial approach, at times here the pacing drags, and it’s unclear whether this is an intentional choice given the realism necessary for the play or if there’s a need to pump up the urgency. Also the differentiation between the two worlds can wobble, almost timidly, and again it’s unclear whether that’s supposed to represent the actors own tentative state at that stage of rehearsal or if there’s a need to sharpen the separation between play and play-within.

Ultimately, it’s a densely philosophical play with sparks of hilarity and a rhythm that may be too casual at times to hold interest for those not already intrigued by the habits of art and the artistic process. But if you are, there’s enough worlds to explore.

2 thoughts on “We Love Arts: The Habit of Art”