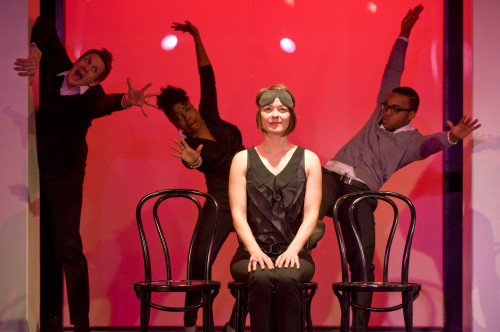 In my previous job I analyzed the prevalence of fear and risk in current events and news. So if I know anything about society, it’s that we love to worry.

We are afraid of a lot of things: invasion of privacy, food contamination, and deadly diseases. West Nile, Cancer, and Swine Flu are just some of the buzzwords that have infiltrated the evening news in recent times.

The problem is we have become so scared stiff we have lost all perspective in measuring and weighing risk. In the summers of 2001 & 2002 it was “The Summer of the Shark”, to which The Daily Show pointed out- more people are killed by falling coconuts than by shark attacks.

My answer is no- but don’t take my word for it, the players of Chicago’s Second City are here to shine the light on death, doom, and gloom in their production of Spoiler Alert: Everybody Dies. The renown Chicago-based comedy troupe returns to Woolly Mammoth Theatre to offer up another show of sketches, songs, and shtick.

Second City has become a popular draw for Woolly Mammoth thanks to previous hits like A Girl’s Guide to Washington Politics and Barack Stars. In “Spoiler Alert”, Second City features a talented comedic ensemble (James T. Alfred, Aaron Bliden, Maribeth Monroe, Scott Montgomery, and Travis Turner) which also includes Woolly company member Jessica Frances Dukes, who I loved in Bootycandy this past summer. While my friend Maura over at the Washington Post had me worried that Spoiler Alert might be a bit of a downer, Second City keeps it light and manages to talk about the idea of fear, dying, and the afterlife without depressing the audience.

Spoiler Alert’s slate of sketches taps into the current Zeitgeist of American fears. Terrorism, the economy, and even childhood bullying may have some news pundits crying that civilization is ending as we know it- but in the eyes of Second City their answer is, “why worry?” If there is one thing that is certain in life, it’s that everybody dies- so we should stop looking at others with a jealous eye and stop looking to material goods to make our lives better. As one Second City member says, “all of our lives are shitty.”

Audience participation is taken to a new level in Spoiler Alert- be prepared to willingly (or unwillingly) become a part of the show the moment you walk into the lobby. A sketch about TSA and their revealing X-ray machines makes the statement that “we are all naked” in today’s online world.

When it comes to the idea fate vs. self determination, Spoiler Alert instead reminds us that regardless of which side you believe in- we all meet the same end. From the opening words of “Fait accompli” to a sketch of a woman who’s afraid of flying, themes of fate underlie much of the show but not in a strongly religious way. The show frames life like a coloring book- “we can color it in however we want but we cannot change the picture.” Some may hear this as a statement of a predetermine path- but I see it as a statement of freedom. Freedom to live life as we want as we all march closer to the ultimate inevitability.

Spoiler Alert is so entertaining that you will enjoy it at face value, it’s only if you choose to take the extra moment afterwards that you start to wonder if we are just a burrito being manipulated by something bigger in life.

4 thoughts on “We Love Arts: Spoiler Alert: Everybody Dies”